“One hundred with the Troop of Hell”: with narco-messages, the Colima Cartel announced an alliance with the Northeast Cartel 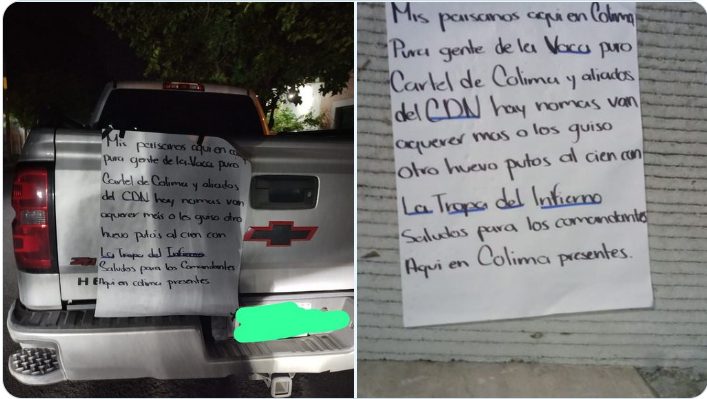 Via two narcomessages it is mentioned that the Colima cartel is now ally of the Northeast Cartel (CDN) and also with his armed arm known as Hell’s Troop. The texts appeared in the state of Colima on the morning of Wednesday, August 17.

Some of the cardboard was found outside a business located hardware store on Benito Juárez Avenue of Villa de Alvarez. Another message appeared in the vicinity of 5 de Mayo streetin the Fatima neighborhood.

Authorities police withdrew the messages and handed them over to the agent of the Public Ministry, who took charge of the corresponding investigations.

“My countrymen here in Colima, pure people of the Cow, pure Colima Cartel and allies of the CDN, there are nothing more, they will want more or I will cook them another put** egg, 100% with La Tropa del Infierno. Greetings to the Commanders, here in Colima present “

The messages were written on white cardboard and according to information from local media, they were placed at different points.

On August 4, it was reported that in the Cereso de Chetumal there had been murdered to the alleged founder of the Northeast Cartel. On that occasion An intern nicknamed the cowboy attacked another known as the caliberwho allegedly would have been a founding member of the criminal group. 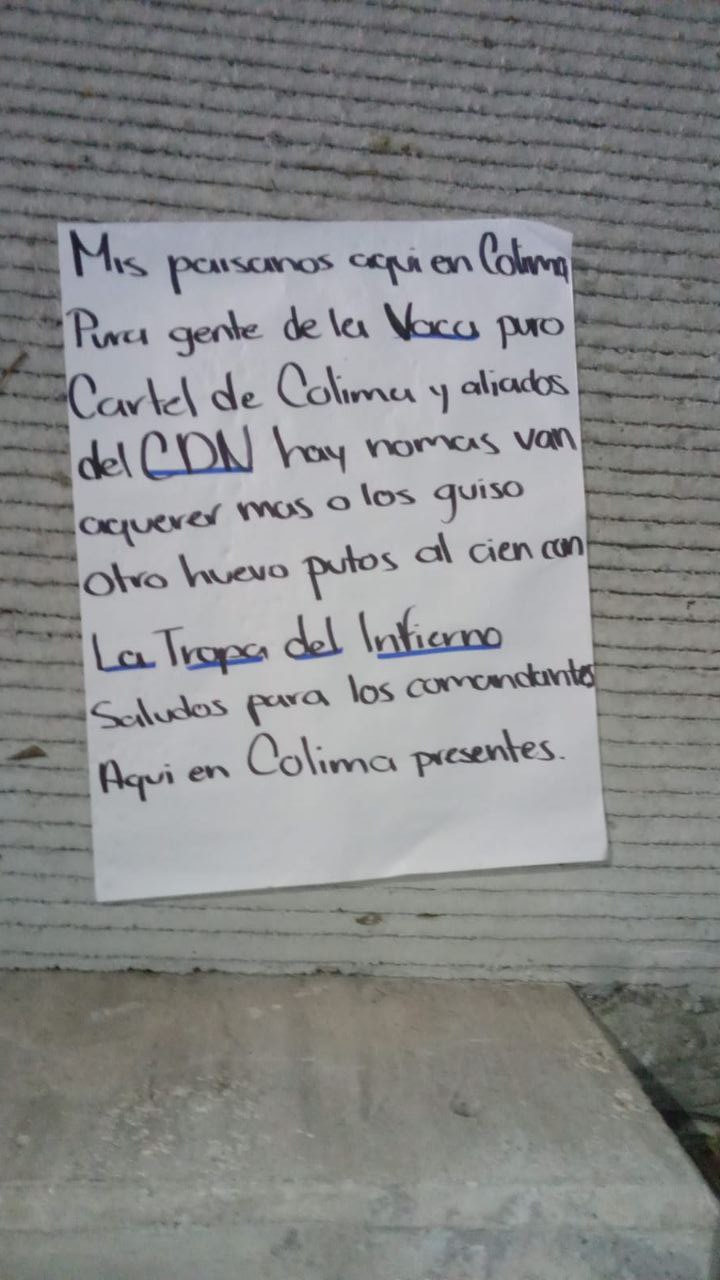 One of the narco-messages was written on white cardboard and was placed near a hardware store (Photo: Twitter/@OscarAdrianL)

The media reposted that the victim was transferred to the nursing area but was unable to arrive alive. the caliber was a member of the hairlessa group presumed was born after a split of the Gulf Cartel. After the attack, a group of inmates was alerted and threatened to take revengeso the people who visited the place were removed.

Last July, a total of 7 bags with dismembered human remains were discovered in two different actions, both in Manzanillo and Villa de Álvarez.

While in Manzanillo, the report of other five bags with remainsduring the afternoon at eden bridge from the Manzanillo-Armería highway, near the town of El Colomo. 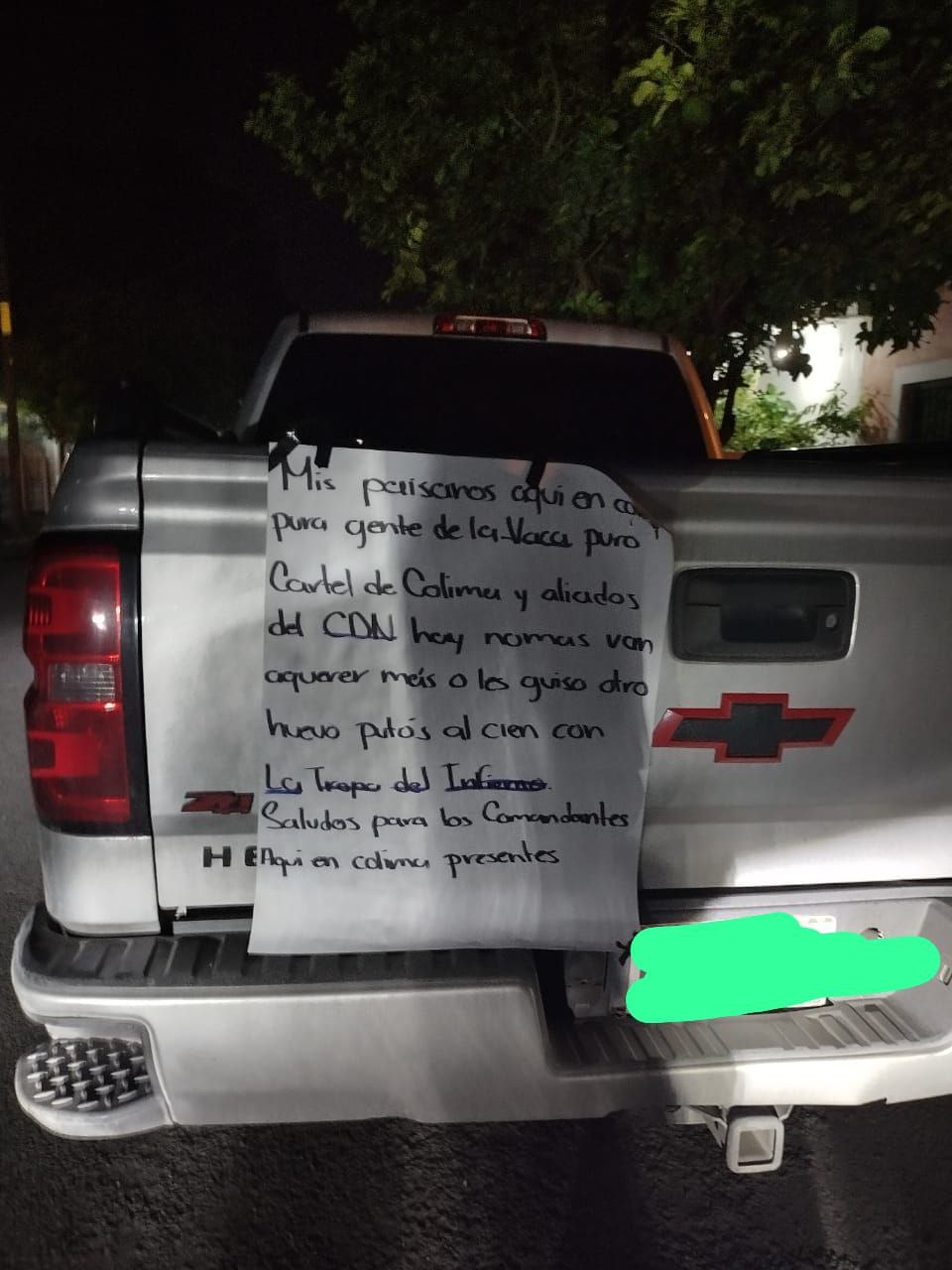 Another of the messages was on a white van (Photo: Twitter/@OscarAdrianL)

At the beginning of the year, in the month of February, there were also narcomantas attributed to CJNG and the Colima Independent Cartel, on that occasion the messages appeared in the conurbation and streets of Villa de Álvarez. Due to the above, state and federal authorities met to define the corresponding actions. Since one of the narcomantas pointed out that the break in the state derived from not respecting the order to assassinate Governor Vizcaíno Silva.

On that occasion, the Governor of Colima published the following message after meeting with the head of the Ministry of Security and Citizen Protection (SSPC), Rosa Icela Rodriguez:

“We endorse our commitment to lead a close, disciplined and coordinated work to advance #PeaceBuilding. On this ship we are together and together and I am convinced that we will soon reach a safe port, ”the governor published after meeting with the Secretary of Security.”

The meeting was also attended by the commander of the National Guard, Luis Rodriguez Bucioas well as intelligence personnel from the Secretary of the Navy of Mexico and of National Intelligence Center.

Colima in drug war: they found 7 bags of dismembered human remains in Manzanillo and Villa de Álvarez
“A war is coming”: they placed narco banners of the CJNG and the Colima Independent Cartel
Colima succumbs to drug violence: the entity registers four murders per day