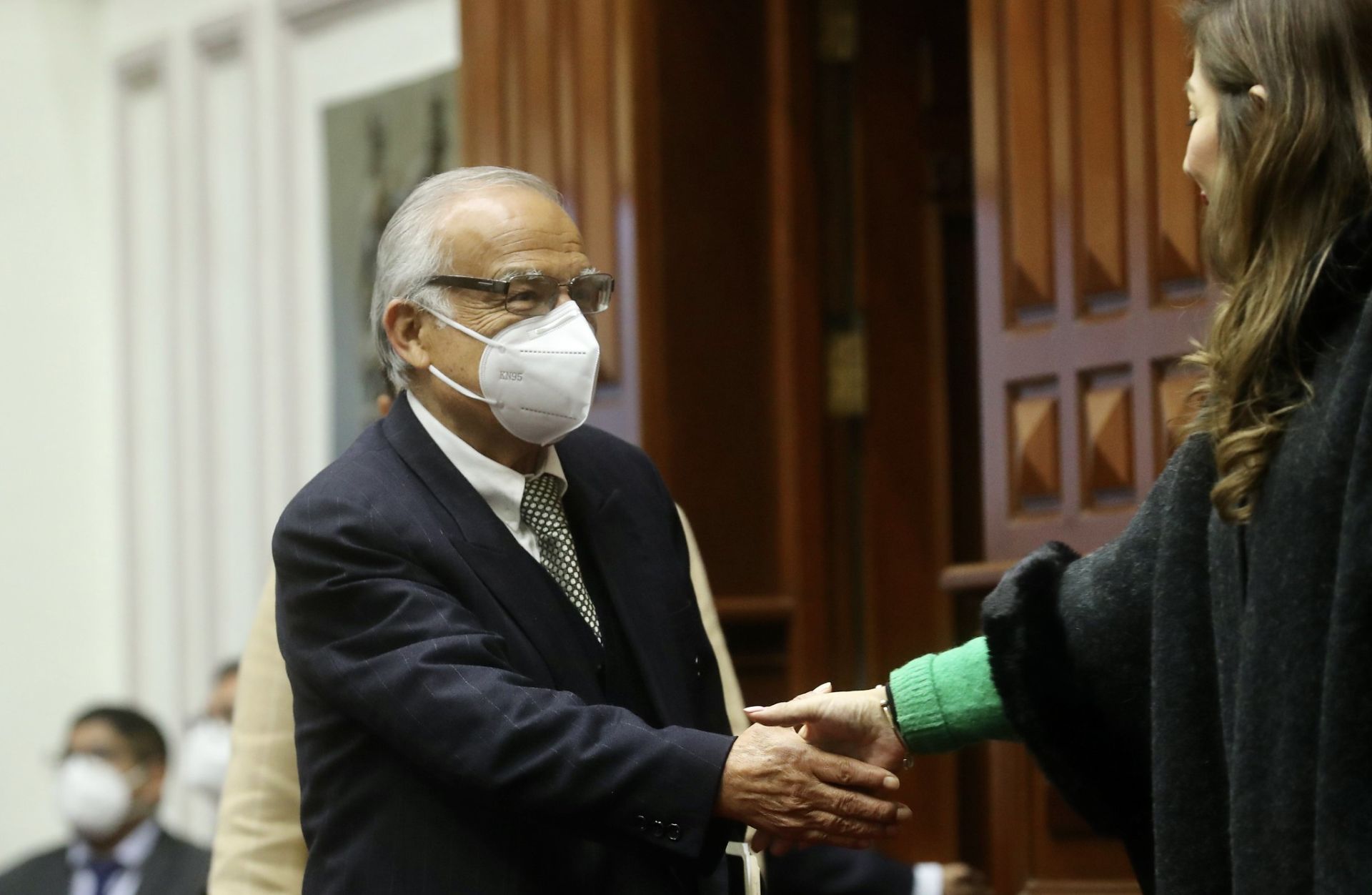 Aníbal Torres and the cabinet of ministers arrived at the Congress of the Republic.

Today, Thursday, Thursday, August 18, the President of the Council of Ministers, Hannibal Torres, will be in the Congress of the republic from 4:00 p.m. to answer for the controversial statements he gave from the Government Palace. Through a document the premiere confirmed his attendance, but indicated that he will do so together with all the Ministers of State.

“It is a pleasure to address you to greet you very cordially and, at the same time, to inform you that I confirm my attendance at the session of the plenary session of the Congress of the Republic to be held todaywhere I will attend with all the ministers of the cabinet that I preside over”, he indicated in a document addressed to Lady Camones.

17:08 The premier ends his speech asking to work together with Congress

17:05 Aníbal Torres denies that the current government is communist and begins to highlight the achievements of the Executive

17:00 Aníbal Torres says that there is excessive freedom of the press in Peru, but he is struck by the fact that the opposition’s calls for violence have not received more attention

16:58 It was learned that earlier, when the ministers were walking to Congress, the head of Minem, Alessandra Herrera, suffered a fall

Sandra Herrera, Minister of Energy and Mines, suffered a fall on her way to Congress. (TV Peru)

16:55 Remember also when Congressman Jorge Montoya (Popular Renovation) said that the vacancy would have a blood quota. Torres showed his respect to Montoya and pointed out that he knows him and that he was his neighbor

16:50 He reminds Congresswoman Martha Moyano that she asked carriers to block the roads to create chaos. The congresswoman herself said that “the strategy we have is not told, it is not said, and of course it is giving results. Of course we are advancing, from our own trenches, from Congress, from the streets and journalists from their space. Stop this saying that there is no strategy (…) This is a battle.

16:45 “I said imagine. I’m not saying come and do something violent. At what point do I say that they come and close the Congress. Why are we going to distort the truth,” Torres said.

16:42 Torres broadcasts a video where characters are heard inciting violence against the government

16:38 Prime Minister Torres begins his speech where he goes on to explain what was said days ago

16:35 The Vice President of Congress, Dina Calle, invites Aníbal Torres and ministers to enter the Hemicycle

16:23 Congress attendees are taken in plenary

16:15 The members of the Executive are still waiting in the Ambassadors’ Room, while the congressmen settle in the Hemicycle

15:48 The ministers receive the honors upon entering the Legislative Palace

Aníbal Torres and ministers arrive at the Congress of the Republic. (TV Peru)

15:40 Ministers headed by Aníbal Torres leave on foot to the Congress of the Republic

15:24 A strong police guard is observed outside the Government Palace.

15:11 Ministers continue to arrive at the headquarters of the Presidency of the Council of Ministers. They will go to the Legislative Palace in a few moments.

14:55 Alejandro Salas, Minister of Culture, indicated that they will attend Congress with a democratic tone and ruled out that they will present a question of trust.

Alejandro Salas rules out that they will present a question of trust. (N-Channel)

The premier indicated that the ministers, of Labor and Justicewill take the floor during their intervention. 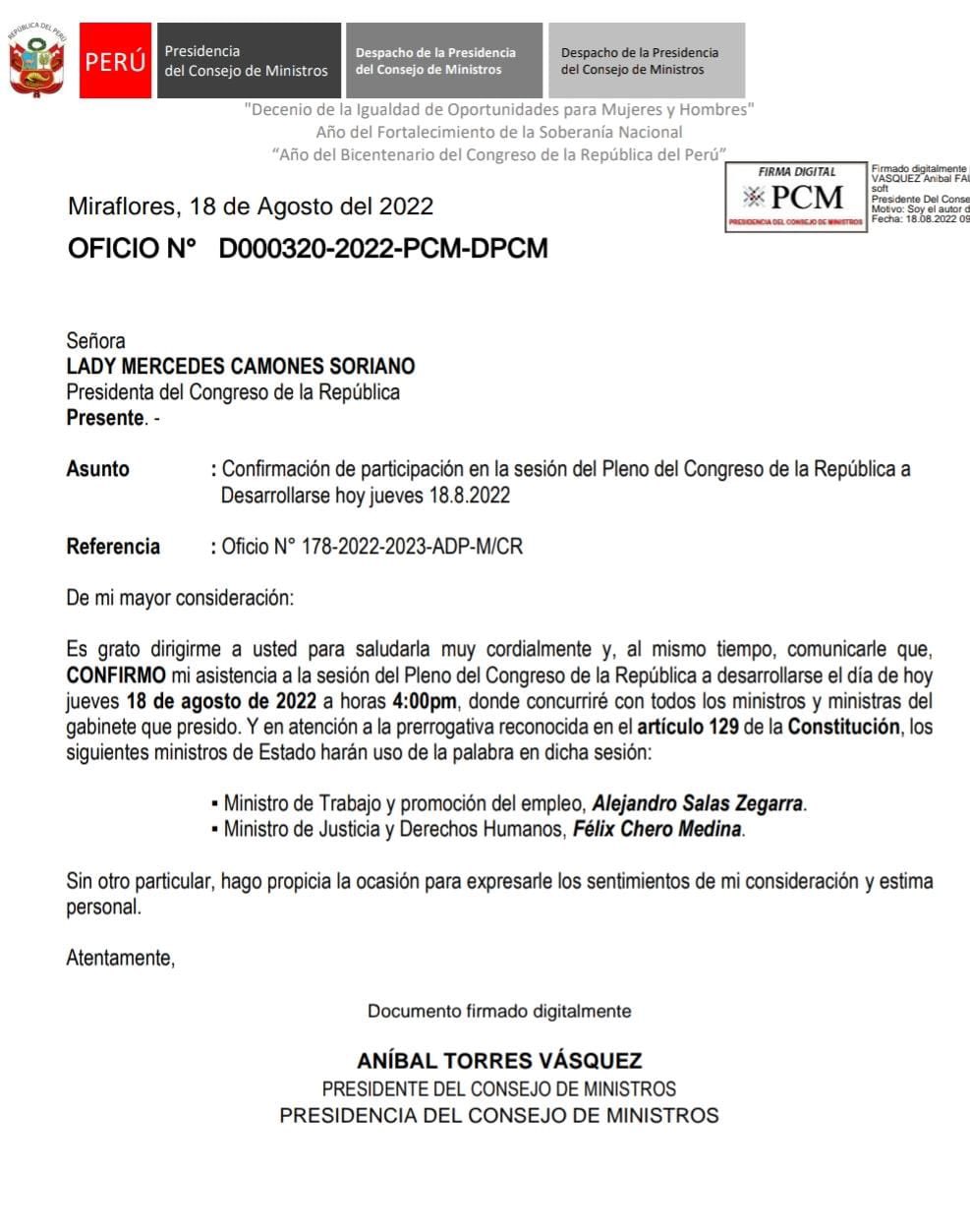 Aníbal Torres will appear in Congress with his ministers

Torres will attend Parliament after yesterday the congressmen debated the motion to invite the premier presented by Avanza País and that was finally approved by 73 votes in favor, 31 against and 5 abstentions.

The president of the Legislative Power was one of the critics of the speech of Hannibal Torres.

“It is unfortunate to have to listen, We already know the premier who is characterized by this type of non-peaceful speech. I think it has been an outburst to have reached the limit of calling these marches and inciting the population to come practically to attack Congress,” said the congressional president. Lady Camones.

At another time, the head of Parliament also addressed the President of the Republic, peter castle, to express his disagreement with what his premier said and ask him to guarantee the safety of both the staff and the facilities of the Congress.

“I write to you to express my greetings and, at the same time, communicate my deep concern and disagreement with your statements and those of the President of the Council of Ministers, Aníbal Torresin which they call for marches by social organizations from various regions of the country to the city of Lima, a situation that could generate confrontations and damage to public and private property,” reads the statement sent by Camones to Castillo.

Also, the congressman of Popular Renewal, Jorge Montoya, was also another who spoke about it. He even filed a constitutional complaint against the president of the PCM for an alleged violation of the Constitution. 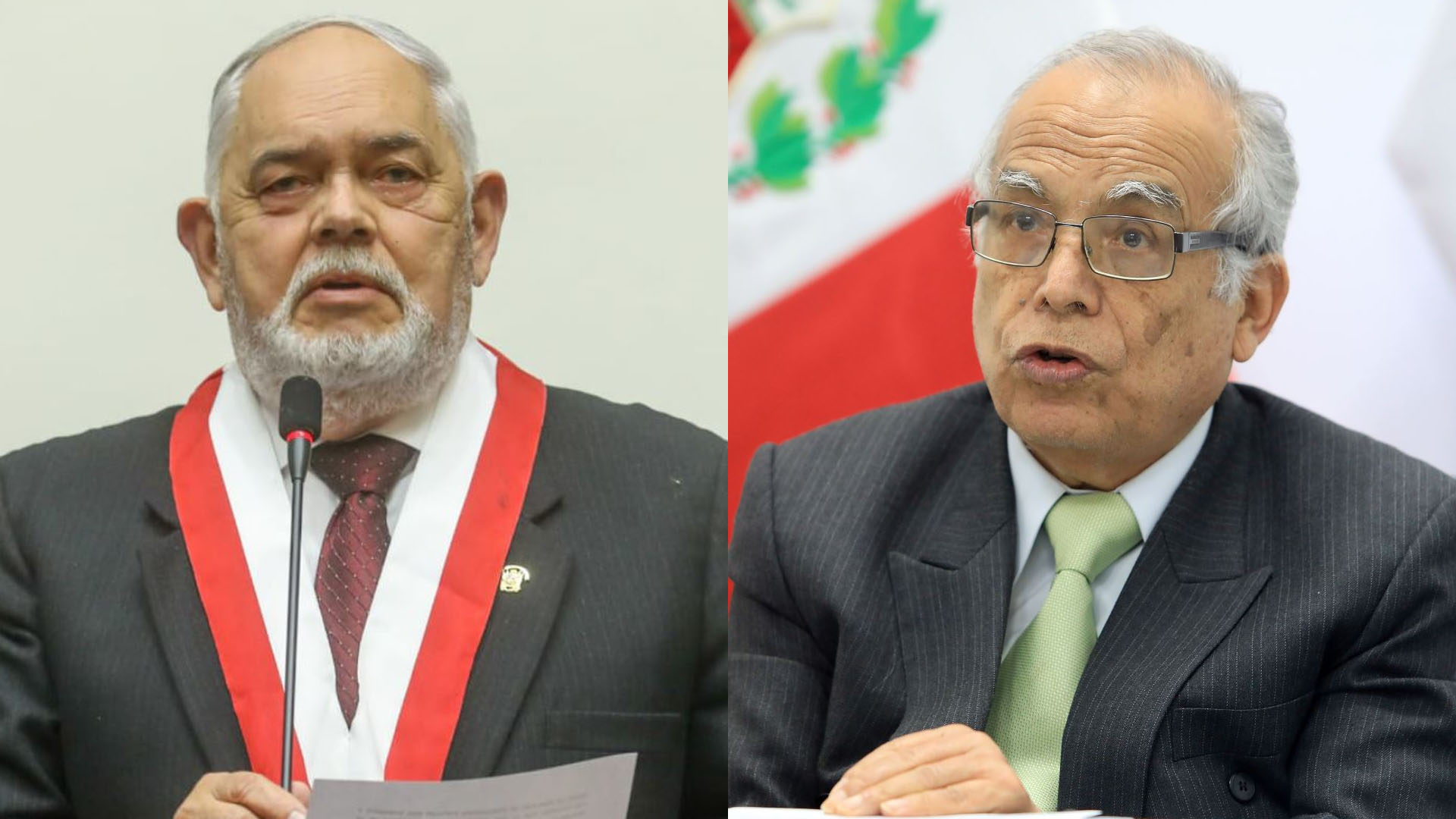 “What they have generated is a subversion, they have altered public order, they have frightened the population, they have called people to face each other, Peruvian against Peruvian. That does not have forgiveness from God and there is a sanction for him because that constitutes a crime, they fit in the crime of mutiny, sedition and terrorism”, criticized the parliamentarian.

For his part, Carlos Anderson, an ungrouped parliamentarian, commented: “It is part of what you have to expect when it comes to Aníbal Torres and his show. He will have a show, he comes with all his ministers. He will have to receive them. We are going to listen to them and let them listen to us too. Let them do all the trust issues. The moment of fear has passed. The president is in a confrontational style. Yesterday he launched scandalous tweets.”

The event occurred on August 11 at the Government Palace, when the prime minister urged the leaders of various social organizations to mobilize towards the city of Lima to bring the “coup plotters” to their knees and introduce a new Political Constitution.

It is worth mentioning that towers He has not ceased to be questioned since he assumed a position in the Executive Power, especially for the way in which he addresses his opponents and the media.

One of his most remembered controversial moments was during a interview with mario bryce. Hannibal Torres ended up starring in an argument with the TV host when he asked him about that phrase he held “blood will flow” alluding to an alleged coup attempt in the country.

“You are not going to stun me, you are talking to people. It’s not that you’re going to talk a lot and a half because you have the means, deceiving people and I’m going to listen to you, no silly little boy, speak with the truth and law. You are not the law, the judges are not going to do what you are saying or what your candidate or Montoya is saying. Here in Peru there is a legal system”, she expressed.

at another time, Hannibal Torres took Adolf Hitler as a reference in order to seek improvements in Peru regarding infrastructure issues. His statement was given during the session of the IV Decentralized Council of Ministers in the city of Huancayo and was a reason for the opposition to request his resignation. 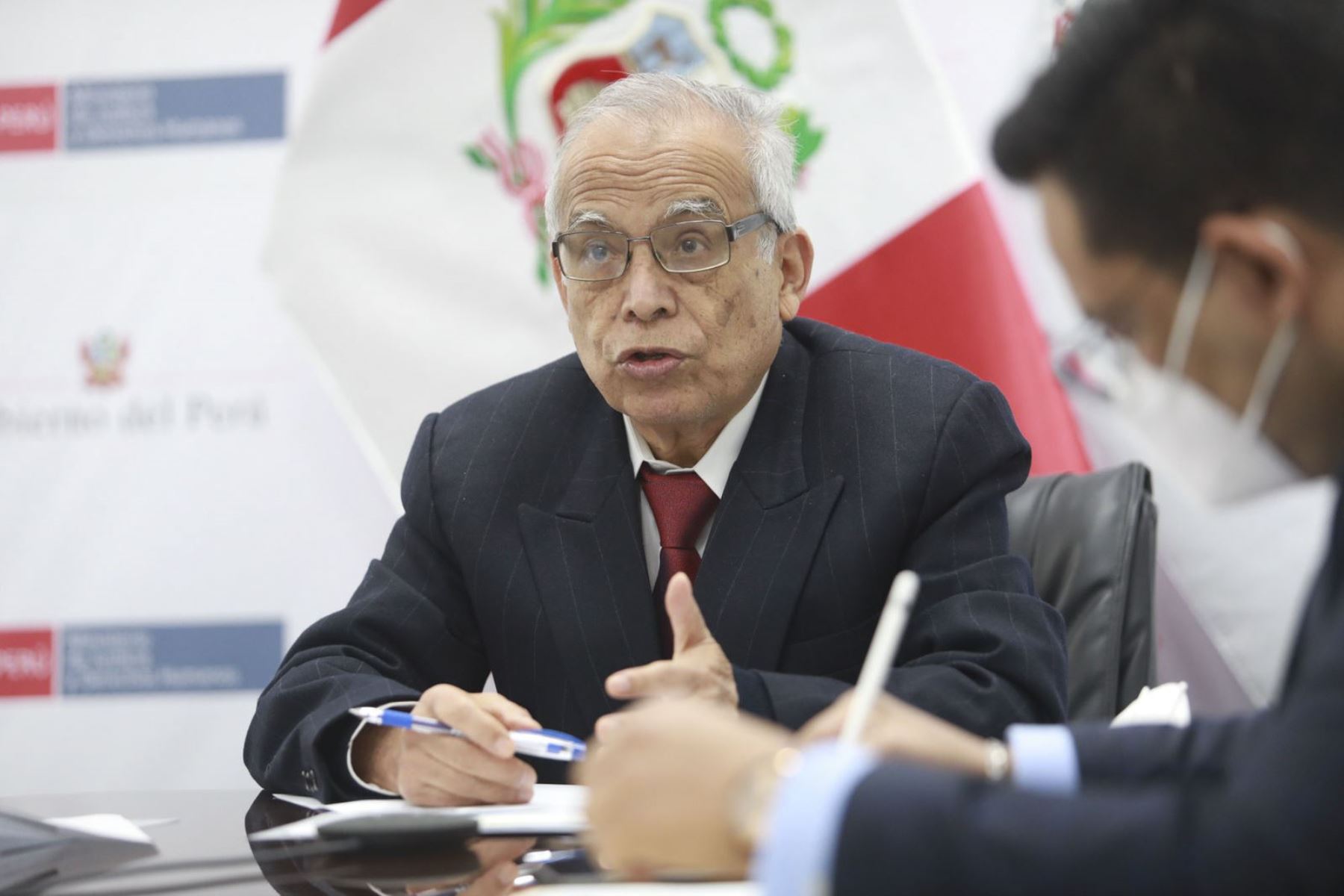 Parliamentarians Jorge Montoya and Gladys Echaíz are in favor of requesting the “internal” protection of Congress from the Joint Command of the Armed Forces for the statements of Aníbal Torres. (Andean)

“The communication channels are, like the veins, the arteries in the human being to be able to survive and advance. I’ll give you an example: Italy and Germany were just like us. But once, Adolf Hitler visits northern Italy and (Benito) Mussolini shows him a highway built from Milan to Brescia. Hitler saw that, he went to his country and filled it with highways and airports and turned Germany into the world’s leading economic power,” said the premier.

Congress of the Republic approved to invite Prime Minister Aníbal Torres for Thursday, August 18
Aníbal Torres responds to Congress: “I am willing to submit even to censorship”
Aníbal Torres resigned from the presidency of the Council of Ministers