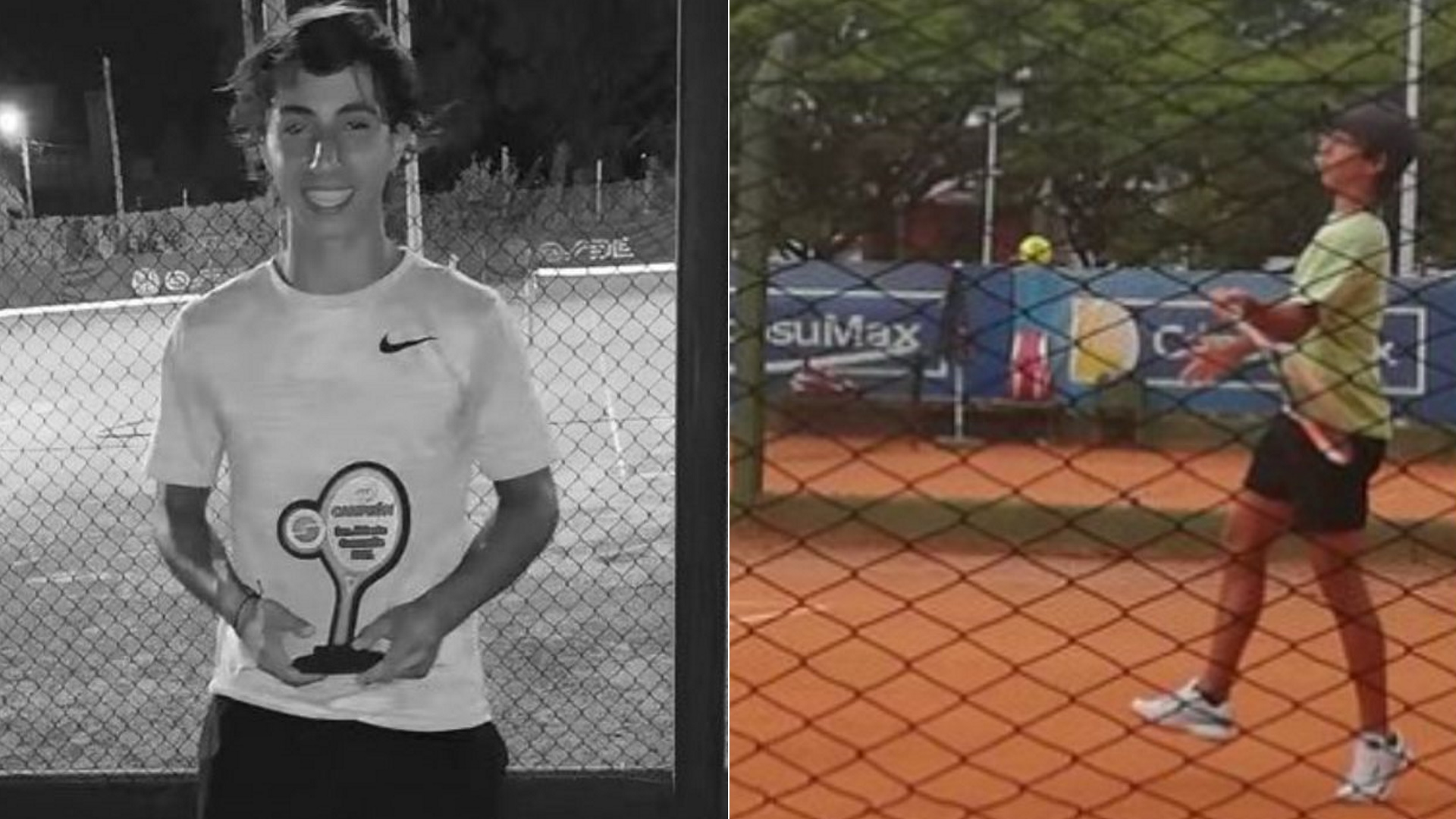 Tiago Alomar, a promising young tennis player, died at the age of 17 as a result of a traffic accident in his native Gualeguay (Photo: @AATenis and @tiago_alomar)

Argentine tennis is mourning the death of Tiago Alomar at the age of 17 in a traffic accident. The athlete and one of the greatest promises of his native Gualeguay, he lost his life as a result of the injuries left by the crash and overturning suffered with his truck in said Costanera of the province of Entre Ríos.

According to local media reports, last Sunday the young man lost control of your vehiclea gray Fiat Strada, which ended up overturning in the vicinity of Parque Quintana from the town of Gualeguay. James He was with another young man, who is out of danger and with minor injuries. It is unknown what happened, but it is presumed that it was the presence of an animal that caused the Alomar lost control of his truck and hit a culvert.

At the time of overturning, they both got fired, although it was Tiago who took the worst part. After being immediately transferred to the San Antonio hospital, and despite the doctors’ attempts to revive him, it was reported that The young athlete suffered a cardiorespiratory arrest due to a tracheal injury and a pneumothorax. Although the death occurred in the early hours of Monday, the sad news was confirmed on Tuesday night by the Argentine Tennis Association. 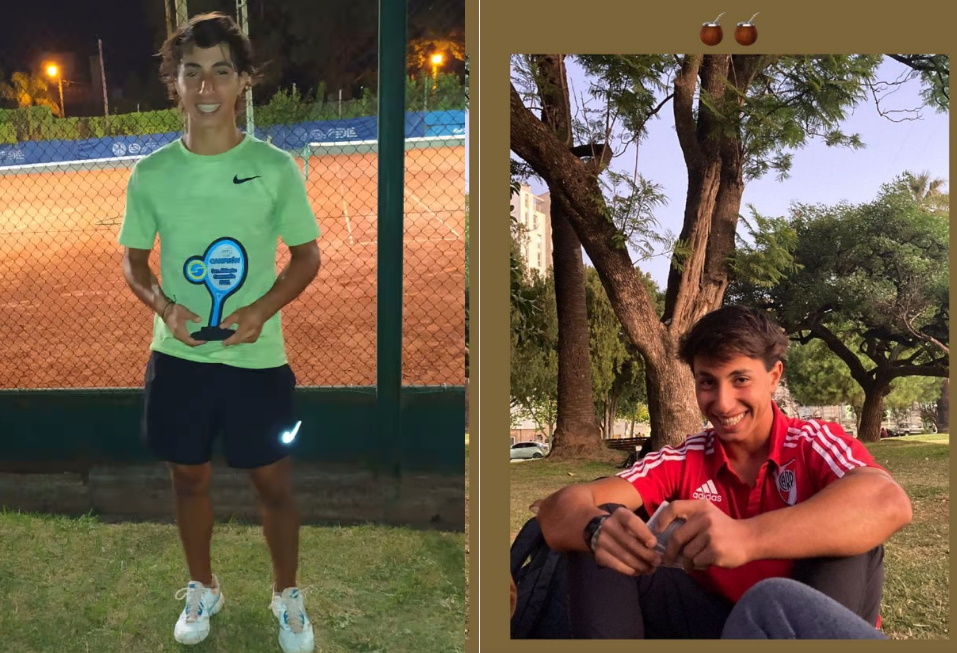 The Argentine Tennis Association itself lamented the death of one of his greatest promises with a publication on social networks. William Coriacurrent captain of the Davis Cup team, Nadia Podoroska and Daniel Orsanicamong other national tennis figures, they were moved by the news and thus reflected it in the following post:

“It is with deep sorrow that we bid farewell to Tiago Nazareno Alomar, a young tennis player barely 17 years old who lost his life in the last few hours as a victim of a car accident. From the Argentine Tennis Association we accompany his family and friends in this painful moment.

The player from Gualeguay, Entre Ríos, played in the AAT tournaments in the Junior and Interclub circuits, where he represented Club Atlético River Plate in the Under 18 category.

Weeks ago he had won a Regional in Concordia in the doubles modality, and was in fifth position in his category in the Region 4 ranking. Tiago trained at the Artoni Tennis Academy, in Santa Fe, and had played the last National of our calendar, in Salta.

This Wednesday we will hold a minute of silence in the 4th National of the season that takes place in the city of Córdoba, and we will do the same on the next date of the Interclub Championship. 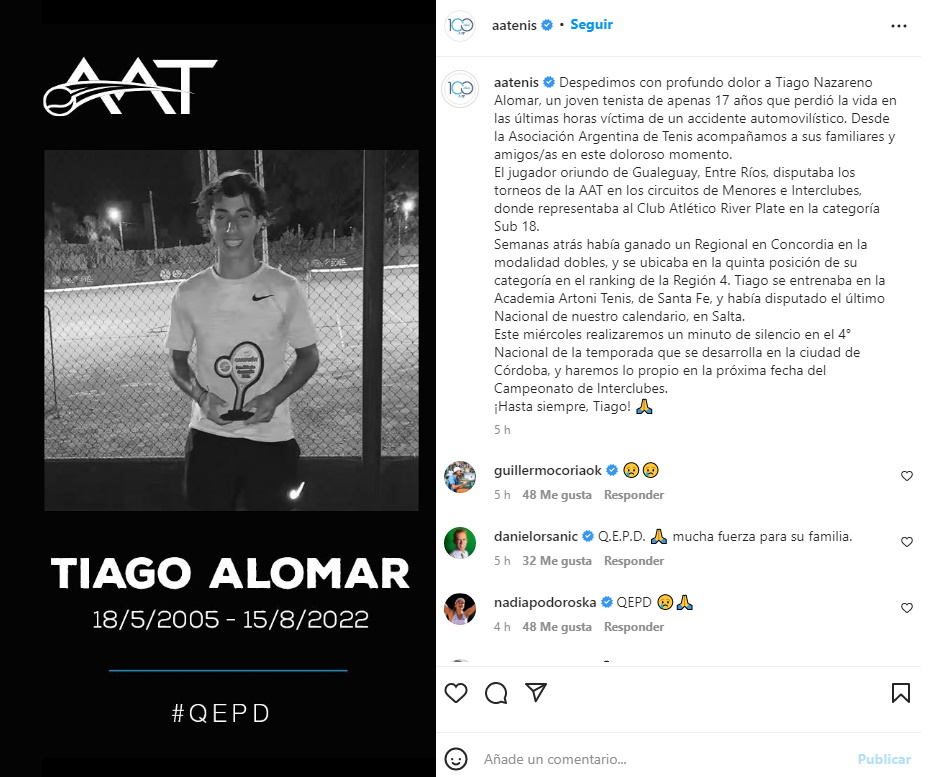 The AAT statement for the death of Tiago Alomar (@Instagram)

The offer for Almendra that Boca did not respond to, the player who did not concentrate because he would leave and the decision for the Zeballos case
The tense live cross between Riquelme and the journalist Federico Bulos: “Stop, stop, I speak and then you answer”
Explosive statements by Schiavi: from “Ibarra never wanted to be a coach” to “Riquelme did not attend to me when they kicked me out of Boca”
The first images of Gerard Piqué’s new partner appeared: who is Clara Chía Martí
Meeting at PSG between Neymar and Mbappé: the Brazilian’s message in private after the scandal