Elections in Italy: the extreme right aims to force a constitutional reform to concentrate the power of the next government 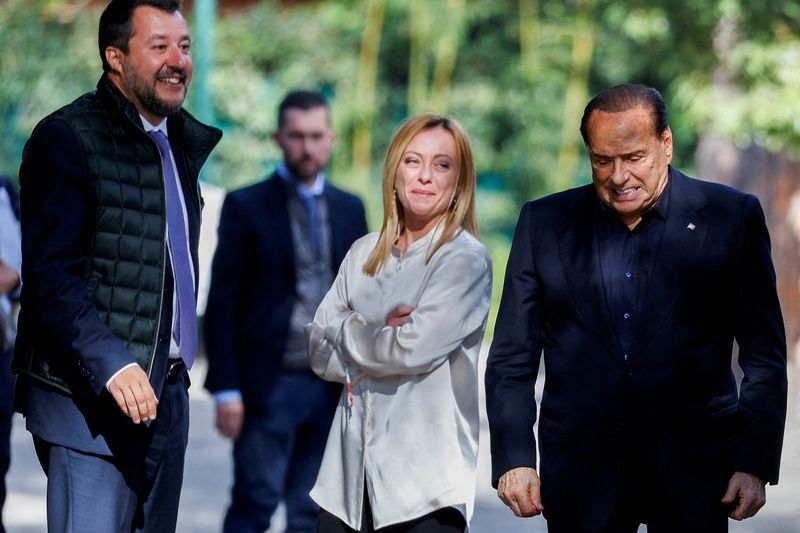 The leaders of the far-right Italian parties the League and Brothers of Italy, Matteo Salvino (left) and Gergia Meloni (centre), together with the country’s former prime minister and leader of the right-wing Forza Italia, Silvio Berlusconi (Reuters)

A maneuver to force a government that concentrates power in one person. A constitutional reform that could lead to an ultra-nationalist regime. Giorgia Meloniwhich heads the coalition that brings together the League of Matteo SalviniForza Italy of Silvio Berlusconicould imitate the nationalist leader, Victor Orbánthat has turned Hungary towards an authoritarian, ultra-conservative and anti-immigration government which openly questions the fundamental values ​​of the European bloc.

Brothers of Italy (Fratelli d’Italia), the party of Meloni, I would bet on a reform of the Magna Carta that would make the Italian president achieve a more important power, powers that would give him a much more relevant role than he has until now.

This roadmap, with an authoritarian bias, has mobilized an agreement between the Democratic Party, Action and Più Europa that will try to compete with chances in the next elections in Italy. An alternative that appeals to those who consider the victory of a right wing also linked to President Vladimir Putin inevitable.

The opposition has pointed out that the leader of the extreme right-wing party shows off her closeness to Victor Orban and continues to advocate absolute sovereignty. The concern has crossed borders. Fear caused Meloni to post a video last week on French, Spanish and English to reassure you of your intentions.

“The foreign press describes me as a danger to democracy, to Italian, European and international stability,” said the Salvini and Berlusconi associate. “An absurdity”, sentenced Meloni.

Also some clues were given by the Berlusconi, who stated that “with the constitutional reform, Sergio Mattarella should resign”. The “cavaliere” has never hidden his desire to become head of state and his opponents fear that a triumphant right wing will assume all powers.

“For Italy”, the 15-point program presented by the right and center parties, who are betting on Meloni, have presented their axes for a possible government if they manage to win the legislative elections on September 25. The far-right candidate justifies the changes in the “defense of the fatherland”, with needs of concentrating powers and attributions to control migratory flows, a reform of pacts with the European Union.

Giorgia Meloni, the leader of the extreme right (Reuters)

“Our program is focused on the national interest and the country, economic growth and the defense of the purchasing power of families,” specify the leaders in the joint document.

The estimates of the pollsters anticipate a victory for the right-wing alliance, which would obtain the two thirds sufficient to open the door to a reform to mold the institutions of that country.

While the right-wing coalition invokes the French or American model with direct election of the President of the Republic, that in this way he presides over the Council of Ministers, the opposition anticipates a shift towards models of concentration of power such as the Hungarian. Viktor Orban shaped the institutions of the republic to suit him, something that is even at odds with the values ​​that represent the European Union.

For Meloni this change would be the solution for Italy. “Presidentialism will make the government of the Nation stronger, more stable and much more competitive,” he insisted.

The opposition also takes note of your sympathy for Benito Mussolini. The risk of a return to fascination that would weaken democracy. “It is not the danger of a return to dictatorship but the advent of a democracy like that of his friend and model Viktor Orbán,” he attacks. Enrico Lettaleader of the Democratic Party, of the new center-left union.

Other traits add up. His intention to distance himself from the European government in Brussels. The “sovereignty” brandishes the need to achieve a “review” of the EU rules on public spending and economic governance. His questioning of the “euro bureaucrats” is expressed despite the fact that Italy is a great beneficiary of the bloc’s recovery plan due to the coronavirus crisis. However, she warns that, in the case of winning, the agreements will be renegotiated “conditions, needs and priorities”.

His anti-immigrant story, his ultra-conservative values, his denial about climate change and his promise to lower taxes on the middle class complete the axes of a future governmentif on September 25 he manages to win.