Sp. Ameliano scored twice in the victory against General Caballero JLM at the Martín Torres stadium 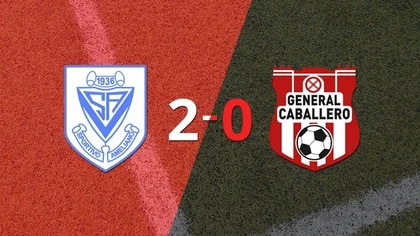 The figure of the meeting was Fredy Vera. The Sp. Ameliano midfielder stood out against General Caballero JLM as he scored 1 goal and kicked 3 times on goal.

Marcos Martinich was also key in the Martín Torres stadium. Sp. Ameliano’s midfielder stood out against General Caballero JLM because he kicked twice on goal.

It was a closely contested match with fouls from both sides. There were several cautioned: Leonardo Incorvaia, Fredy Vera, Tobías Castellano and Osvaldo Martínez.

The coach of Sp. Ameliano, Humberto García, arranged a 4-4-2 formation on the field with Jorge Chena in goal; Ramón Coronel, Leonardo Incorvaia, Hugo Benítez and Abel Paredes in the defensive line; Diego Barreto, Aldo Maíz, Frederick Alfonso and Alejandro Samudio in the middle; and Antonio Oviedo and Alex Arce in attack.

For their part, those led by Gustavo Florentín were planted with a 4-4-2 strategy with Gustavo Arévalos under the three sticks; Eduardo Duarte, Tobías Castellano, Junior Barreto and Tomás Lezcano in defense; Osvaldo Martínez, Franco Costa, José Vera and Guillermo Hauche in midfield; and Elías Alfonso Aranda and Cristian Paredes up front.

The referee appointed for the match was Alipio Colmán.

Sp. Ameliano will visit Resistencia SC on the next day, while General Caballero JLM will receive Olimpia at the Estadio Ka’arendy stadium.

The local is in sixth place with 9 points, while the visitor reached 6 units and is placed in eighth place in the tournament.