“It seems to us that the president and the minister are making a dome in their interest”: ACORE 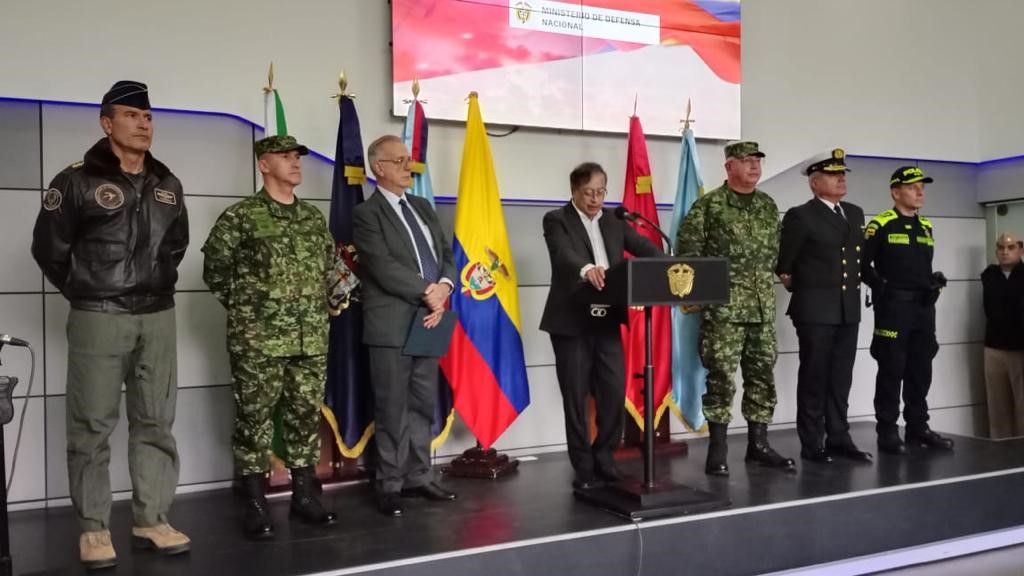 A week has been completed since the possession of Gustavo Petro What president of Colombia and there is already new military leadership under the premise that in this government human rights will be a priority for the Public Forces. The determinations of the head of state have had various supporters and opponents.

Precisely one of the voices in rejection of the recent indications that the president has indicated has been the Retired Colonel John Marulanda, President of the Colombian Association of Retired Officers ACORE, who pointed out the Generals and Colonels who left after the appointment of the new military leadership. Retired Colonel Marulanda indicated that a large percentage of experience in the fight against criminal structures emerged with the appointments of Gustavo Petro.

“The new military leadership has been designed by the new government (…) the new design aims to have a military and police command, in some way, subject to the political wishes of the government in power, Which doesn’t stop worrying us… it seems to us that the president and the minister are making a dome in their interest”he mentioned to the radio station The W.

Another of the aspects touched on by the president of ACORE was Petro’s recent trill in which he mentioned: “The commission of massacres and their impunity in the jurisdictions of military and police commands will affect the resumes of the commanders. From now on, all military or police command in their jurisdiction must ensure that the commission of massacre and death of social leaders is neutralized as much as possible”. 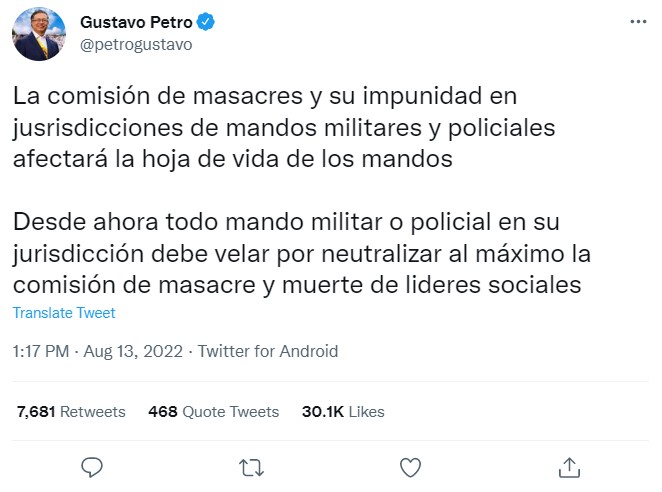 Regarding the declarations of the head of state, the president of ACORE pointed out that it would be ‘staining resumes’ without the constitutional right to the presumption of innocence. “We hope that President Gustavo Petro’s announcement will not be prescient in that the resumes of those in charge of the different jurisdictions can be stained by any event of massacres that occur in those areas”.

To conclude, Marulanda described as unfair that the Public Forces have to answer for the actions of criminal groups. “It is unfair to enter once and for all, cutting off heads without first having made an in-depth analysis of the guilt or not of the military or police in these criminal acts”.

According to Petro, the decision on the new military leadership was made based on “a matrix with all this information, knowing that all of it is relative: processes, judicial ties, citizen complaints, etc.”. He noted that work had been going on for several weeks on this list of names, but the journalists “They did not get to perceive the news until today, so it shows that there was a good reservation in this activity”.

The President of the Republic said that he trusts the people elected to advance his project of human Security, whose success will not be measured in the number of deaths, but in the decrease substantial of deaths and massacres, plus the substantial increase in freedoms and rights for people.

This is the transformation of the economic policies of the State with the arrival of Gustavo Petro
Katherine Miranda insists on the tax on churches: “Today they are electoral companies that profit from unwary people”
Gustavo Petro will file an urgent message before the House of Representatives to process the Tax Reform