“Huge, gigantic!”: This is how the ‘Perro’ Bermúdez reacted when receiving a gift from the artist Juan Carlos Santoscoy

The retirement of one of the most recognizable soccer commentators in the country is well known in the Mexican sports world. Well Henry the dog Bermudez will leave the microphone after more than 46 years of career.

As part of his farewell, the commentator received during the match between Chivas and Atlas as part of matchday 8 of Apertura 2022 in the MX Leaguea gift from a plastic artist to commemorate his long career.

The person responsible for this gift was Juan Carlos Santoscoyan artist from Guadalajara, Jalisco, who expressed his respect and admiration for the chronicler.

“Being able to do a work where it represents me what you project at the national level and for me this is a great luxury”, stated the plastic artist who showed his emotion with each word he pronounced. 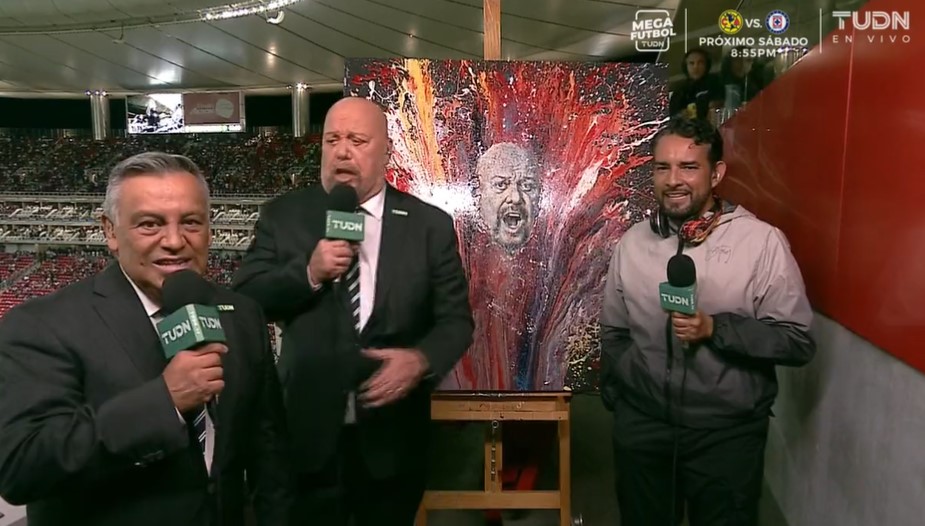 In the work, which was discovered by the artist, you can see the commentator’s face on paint stains rising from the bottom of the painting to the top.

Red predominates with white and yellow parts with a little blue near the sports commentator’s face.

“Ufff, ufff and archi-super-recontra uffff”, reacted the Dog Bermúdez when the work was discovered. “Look inside that huge painting… the pelón spoils things”, he joked.

The news of his retirement was made known at the end of May, when during the broadcast of TUDN for Mexico’s game against the United States, the television station took a break from coverage to share its decision with the public. 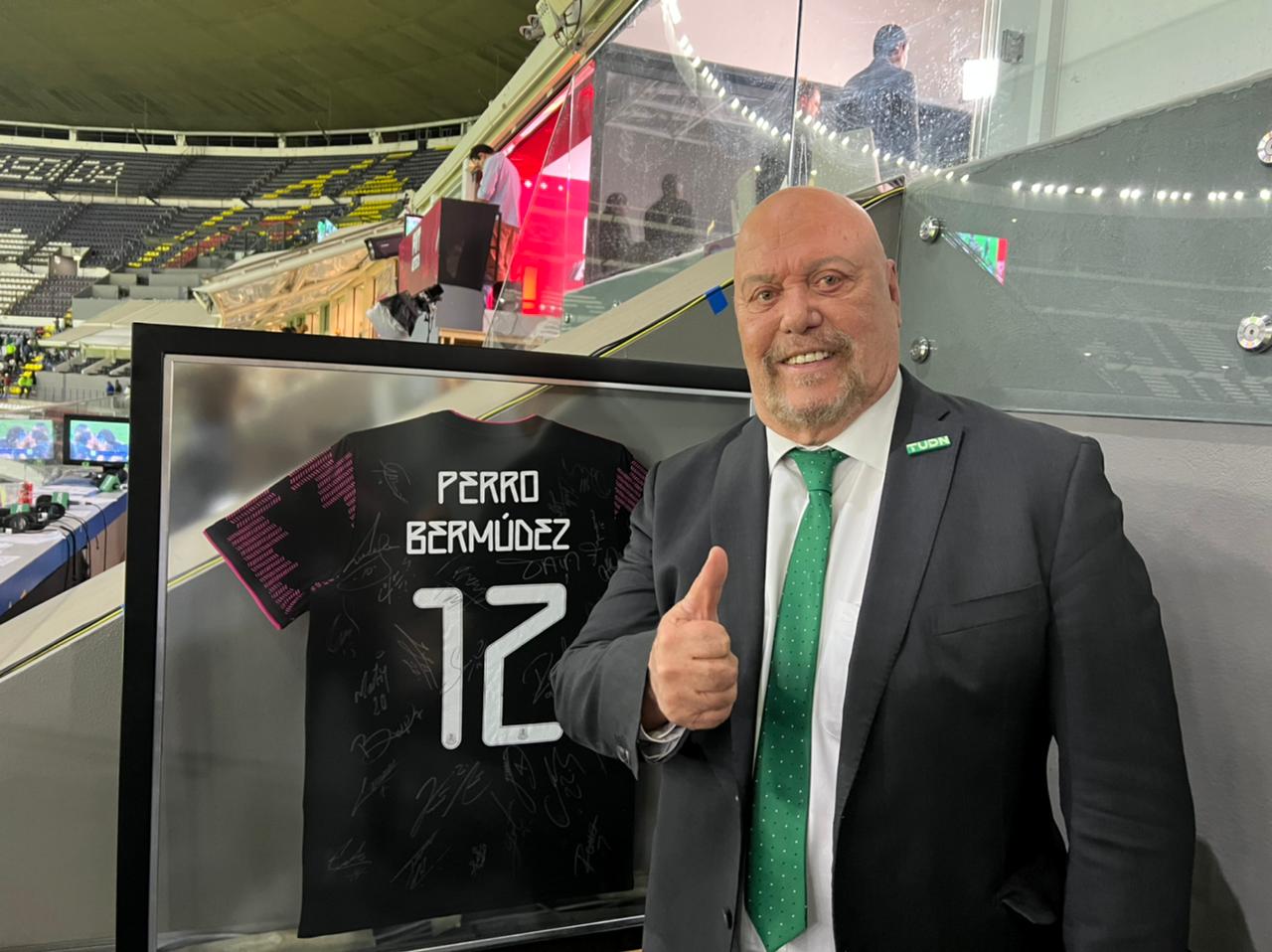 El Tri gave a signed sweater to Perro Bermúdez for his retirement from narrations (Photo: Twitter/@enriquebermudez)

For this, the commentator has received various gifts for his career and the announcement of his retirement from the media. For example, after Tricolor’s victory against El Salvador at the end of May, the commentator received a gift from the players.

It was a T-shirt On behalf of all the players of Gerardo’s team daddy Martino, which was recorded with the back number 12 and with the name of Dog Bermudez. In addition, it contains the signatures of all the national team footballers who qualified for Qatar 2022.

“Thanks to all my brothers from @miseleccionmx for this detail azo azo azo. It has always been an honor to narrate to the TRI See you at # Qatar2022! ”, He published through his social networks. 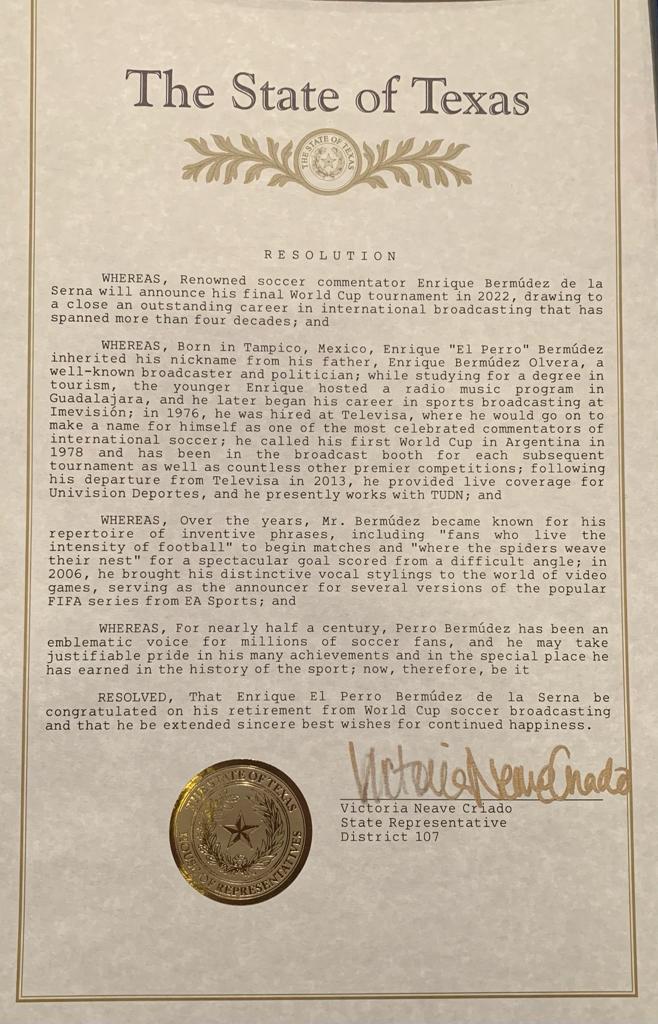 Similarly, he was given a recognition on behalf of the state congress of Texas and in Phoenix gave him the same recognition, plus the decree of the Day of Dog Bermudez which is celebrated on June 2.

In this regard, TUDN issued a call in recent days so that the void left by its withdrawal be filled. This campaign is called “Perro Bermúdez ‘El Legado’”, with which castings will be held to find the new narrator of the TUDN

Participants must be 18 years of age or older to participate in this three-stage casting and if they win, they will receive a 12-month contract and classes with Enrique Bermúdez.

Pumas vs. America: Dani Alves and the error that gave the victory to the Eagles
The best memes that the thrashing of America left to the Pumas
Raúl Jiménez starred in a “Mexican moment” in a famous cartoon 100 days after the World Cup