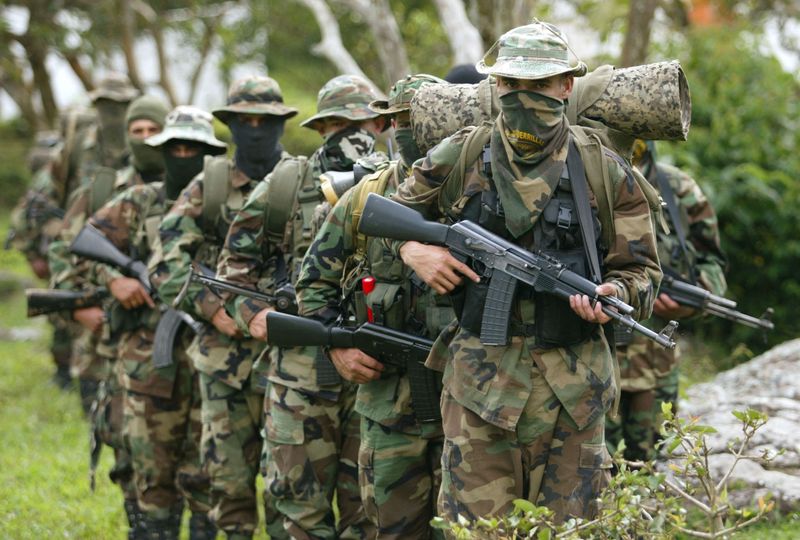 Despite the announcements made by the Clan del Golfo regarding its willingness to hold talks with the new government of Gustavo Petro, its harassment of the civilian population continues in some areas of the country. According to complaints made by some people on social networks, through a pamphlet, members of the drug trafficking group threatened environmental defenders from Santurbán and human rights defenders from Santander.

According to what the illegal group points out, Víctor Julio Cortés, Imelda Martínez, Rafael Ovalle, Oscar Estupiñán and Mauricio Martínez, they became a “military objective” for allegedly being related to the guerrillas and living for their interests.

“The staff of the Clan del Golfo is allowed to notify the people mentioned as military objectives due to the activities they carry out and of which we do not agree, since they are helpers of the leftist guerrillas and they operate in Santander”reads the pamphlet signed by the Aristides Meza bloc of South Bolívar and Magdalena Medio. 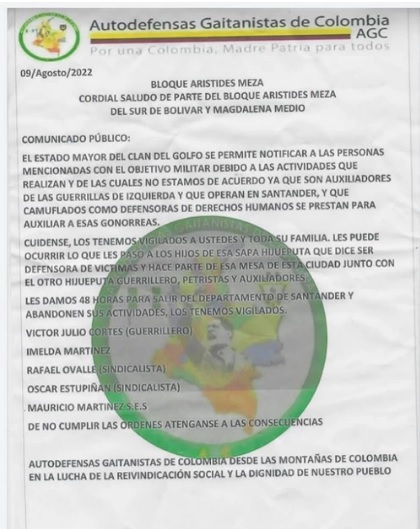 One of the threatened leaders spoke before the microphones of BluRadio and noted that the threat reached them at the headquarters of the aqueduct union and that they are related to the guerrilla for defending the moor and the territory. In addition, he announced that the message had already been reported to the corresponding authorities.

“It is a threat that reaches us at the headquarters of the aqueduct union and says that we are guerrillas when the only thing we do is defend the moor and take care of things. We are not going to be intimidated, the Police are already aware of the matter and we will make the respective complaint to the Prosecutor’s Office,” said Rafael Ovalle, from the Bucaramanga Metropolitan Aqueduct union.

Despite the fact that the drug trafficking group gave the aforementioned leaders 48 hours to leave the territory, they assured that they will not flee, because they want to continue their work: “We are not going to leave, they want to intimidate us. The work that we do does not harm anyone”Oval added.

A few days ago, the Clan had sent a message mentioning that it would carry out a bilateral ceasefire as an “expression of goodwill with the government that is beginning and its wide provision of paths of peace”:

“Consistent with these historical dates, we also decree a unilateral cessation of offensive hostilities, as an expression of goodwill with the government that is beginning and its broad willingness to search for paths of peace for all the actors in the conflict, as of August 7” , the statement said.

Likewise, they expressed that their expectations with the new government: “We hope it is the beginning of a different era for our troubled homeland, we will lift all the extreme measures that we have had to carry out, as we already announced in a statement in the previous days”, the criminal group stated in the letter.

It should be remembered that representatives of the elected government have spoken on different occasions about a possible negotiation with the Clan del Golfo. In this way, the criminal group showed its willingness to negotiate a disarmament with the Petro administration:

“We have the best will to join the exploratory peace talks that Gustavo Petro has announced since the moment of his election. We believe that it is the best decision for the forgotten Colombia that we represent”, reads the end of the letter published by the criminal group.

450 thousand people would benefit from a sustainable tourism project in the Ciénaga Grande
A new complaint against Zapateiro: the former commander would have acted “in favor of the pockets of his close ones”