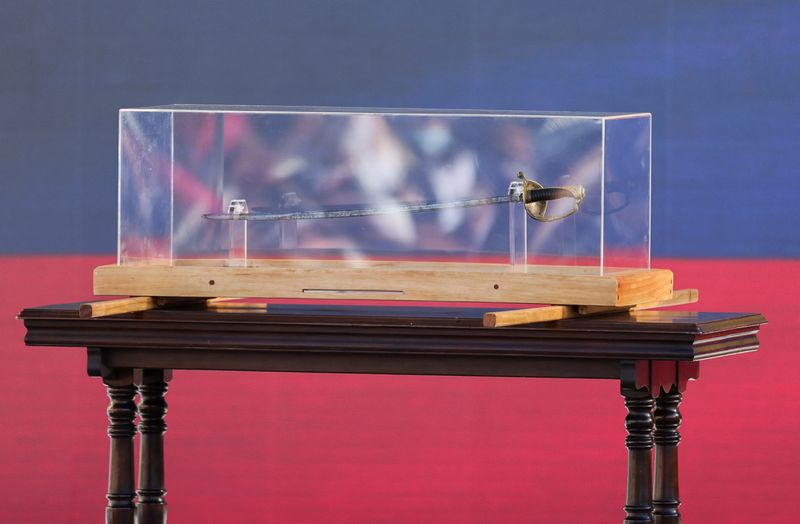 It also became, perhaps, the main controversy on August 7, the day of Gustavo Petro’s presidential inauguration. All on account of the fact that the outgoing president, Iván Duque, is not known to be advised by which douchebagdid not want to let him take the sword -as requested by Petro- to the possession ceremony.

Petro settled the controversy by ordering, immediately after his oath, that soldiers of the presidential guard carry the urn with the sword to the square where the assistants stood up from their chairs as he passed.

The sword is actually one more anecdote from our long war that had both horrific tragedies and crazy comedies. The M19, in one of its first actions, stole it from the Quinta de San Pedro Alejandrino, in Bogotá, to publicize its presence in the Colombian war. Later, at the time of his demobilization, he handed her over to President Cesar Gaviria and since then she has been in the Casa de Nariño.

But the anecdote does have a great background. Colombian elites you they turned their faces to the liberator, to his ideas, to his great purposes. They left him alone at the time of his death, in an agony that lacerates the soul, when one visits the place where he spent his last days in the Santa Marta of the thirties of that stormy nineteenth century.

But most importantly, they abandoned their slogan of seeking a path of their own for our country. The 1886 Constitution and the educational project of the conservative hegemony that governed the country from 1930 to 1930 were a return to Hispanic roots. Miguel Antonio Caro, who drafted the constitution with all its points and commas and weaved the spirit of that time, proclaims that return as his great work.

The liberator then became an adornment of parks, museums and prizes. He was never again a benchmark of great transformations in the search for his own path. They left the field open for the guerrillas to adopt him as his great inspiration in the eighties of the last century, appropriating his sword and grouping around the Simón Bolívar Guerrilla Coordinator.

The country is not aware of how great General Simón Bolívar was. The BBC in London, at the end of the millennium, declared him the most important man in history. At only 47 years old, he fought in 447 battles, being defeated only 6 times. He rode 123 thousand km, covered 10 times more than Hannibal, 3 times more than Napoleon and twice as much as Alexander the Great. He defeated the most powerful empire of his time, winning the freedom of six nations, including Colombia.

Those are his military exploits, but his political vision and his intellectual contribution is not minor. The Jamaican Letter It is a great political testament. With unusual talent and enormous intuition, he describes one by one the nations of Latin America, with the exception of Brazil. He dares to calculate its inhabitants, he talks about the hardships they face, the war they wage against the Spanish empire, the virtues and riches they treasure, he compares what is happening in these lands with what is happening in the world. Then he dares to point to his future and says:

“When events are not assured, when the State is weak, and when enterprises are remote, all men hesitate; Opinions are divided, passions stir them, and enemies encourage them to succeed by this easy means. After we are strong, under the auspices of a liberal nation that lends us its protection, we will agree to cultivate the virtues and talents that lead to glory; then we will continue the majestic march towards the great prosperity to which South America is destined; then the sciences and the arts that were born in the East and have enlightened Europe, will fly to free Colombia that will invite them with an asylum”.

Now that Alejandro Gaviria, Minister of Education, has said that schools should study the report on the Truth Commission, I suggest that -placing it in its context- it be studied in grade 11 The Jamaican Charter.

P.S. This phrase that circulated on social networks is great: “It is the first time that a thorn has been removed with a sword.”