The recurring cycle of violence over indigenous rights in Ecuador 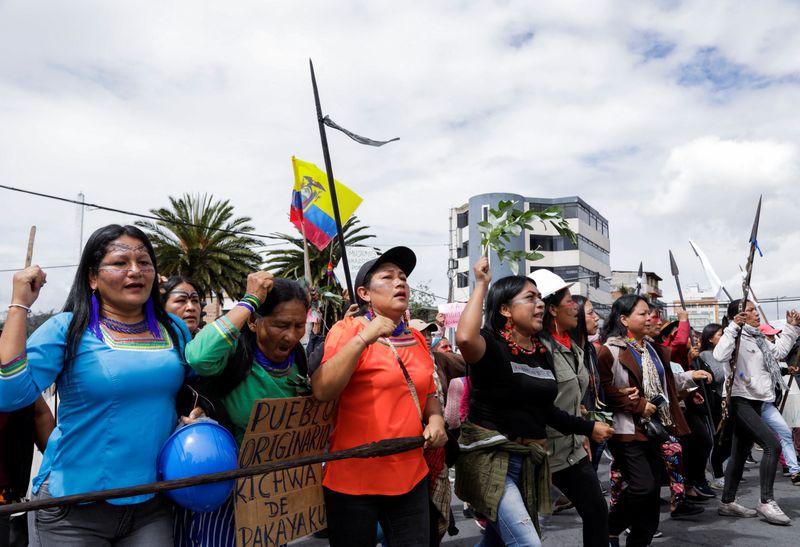 Women from different indigenous organizations participate in a demonstration demanding the reduction of fuel and food prices and the end of police violence after almost two weeks of massive protests, in Quito, Ecuador June 25, 2022. (REUTERS / Karen Bull)

The anti-government protests that took place in Ecuador in June, with their images of police violence and abuse, evoked a sad sense of déjà vu about the 2015, 2019 and 2020 protests. But this time the authorities should show that they are truly determined to address structural problems, ensure accountability for security force abuses, and prevent future waves of looting and vandalism.

On June 30, government authorities and indigenous leaders reached an agreement, after several days of unrest, to stop the protests that had begun on June 13. Indigenous organizations led by the Confederation of Indigenous Nationalities of Ecuador, CONAIE, had called for protests in the face of what they considered the government’s lack of will to address their claims.

Among other measures,he indigenous organizations had asked the authorities to guarantee the collective rights of indigenous peoples; intervene to lower the prices of food and other essentials; ensure their access to health, education and employment; and remedy the socio-environmental impacts of mining and oil extraction in indigenous territories.

These are long-standing debts. Although Ecuador’s constitution and international law recognize the rights of indigenous peoples —including prior consultation on mining and oil projects that affect their territories—, United Nations experts have identified the “gaps that continue to exist” in the effective implementation of those rights. Indigenous communities are generally found in rural areas, where the percentage of people living in poverty is double that of urban areas. Poverty exacerbates lack of access to basic services, including health care. According to government statistics, the percentage of the population in rural areas that has adequate jobs—that is, that allows them to earn at least the minimum wage—is less than half that in urban areas.

It is essential that the authorities, in the long term, show a genuine commitment to prioritizing the rights of indigenous communities, which includes ensuring that they are heard regarding the protection of their rights and their lands. They must also ensure timely, thorough and impartial criminal investigations of police officers involved in excessive use of force and crimes committed by protesters and others. After the past demonstrations, between the pardons and the cases that languished until they prescribed, the investigations against aggressors from both sides did not produce results.

The protests, which began peacefully, ended up reaching shocking levels of violence.. Some people, who allegedly infiltrated the protests, looted and vandalized public and private property and prevented the delivery of medicine and oxygen to hospitals, according to government officials. Some protesters attacked security force agents and journalists covering the demonstrations. More than 200 police officers were injured and 37 were held by protesters for several hours, according to the National Police. These actions far exceed the right to peaceful assembly protected by international law.

On several occasions, police responded with excessive use of force, firing tear gas canisters directly at protesters or near areas where children and injured people were present. Five demonstrators and a soldier were killed and more than 300 people were injured, according to information from local human rights organizations. In one of the cases, the government confirmed that the victim had been hit by a tear gas canister.

The police have a responsibility to protect Ecuadorians from violence. But authorities must also respect the right to peaceful assembly and ensure that police use force only when strictly necessary and proportionate, in a manner consistent with law and commensurate with threats to the rights of others. The authorities should also stop deploying military forces for public order tasks. As we have seen in other parts of Latin America, the excessive use of force tends to worsen the situation of social unrest.

As we followed the scenes of violence and abuse, we are reminded of what happened during the anti-government demonstrations in August 2015 and October 2019, as well as during the May 2020 peaceful protests against the government’s handling of the Covid-19 pandemic.

In all cases, the protesters began with legitimate demands.

In all cases, violence erupted, either by protesters or suspected infiltrators.

In all cases, there was evidence of police abuse.

In all cases, impunity prevailed.

And in every case, authorities found a way to put out the fire — sometimes literally — without resolving the underlying issues that gave rise to the protests.

This time, the authorities can break the cycle of violence and abuse that occurs in anti-government protests in Ecuador by addressing the structural causes that motivated people to take to the streets.

The government has taken initial steps, which can be seen with the reduction in fuel prices, the increase in the budget allocated to intercultural education, the declaration of a health emergency to speed up the purchase of medicines and medical supplies for all people, and the commitment to modify the legislation on mining and oil extraction in indigenous territories.

The agreement reached by both parties at the end of June includes a commitment to sit down at the table to address the demands that gave rise to the protests. If carried out effectively and honestly, the current dialogue has the potential to help Ecuador address issues that have long undermined the rights of peaceful protesters and people excluded from the protection and assistance of the government.

Originally published in English at https://fpif.org/ecuadors-recurrent-cycle-of-violence-over-indigenous-rights/

Tamara Taraciuk Broner is deputy director for the Americas and Martina Rapido Ragozzino is senior research assistant, both at Human Rights Watch.