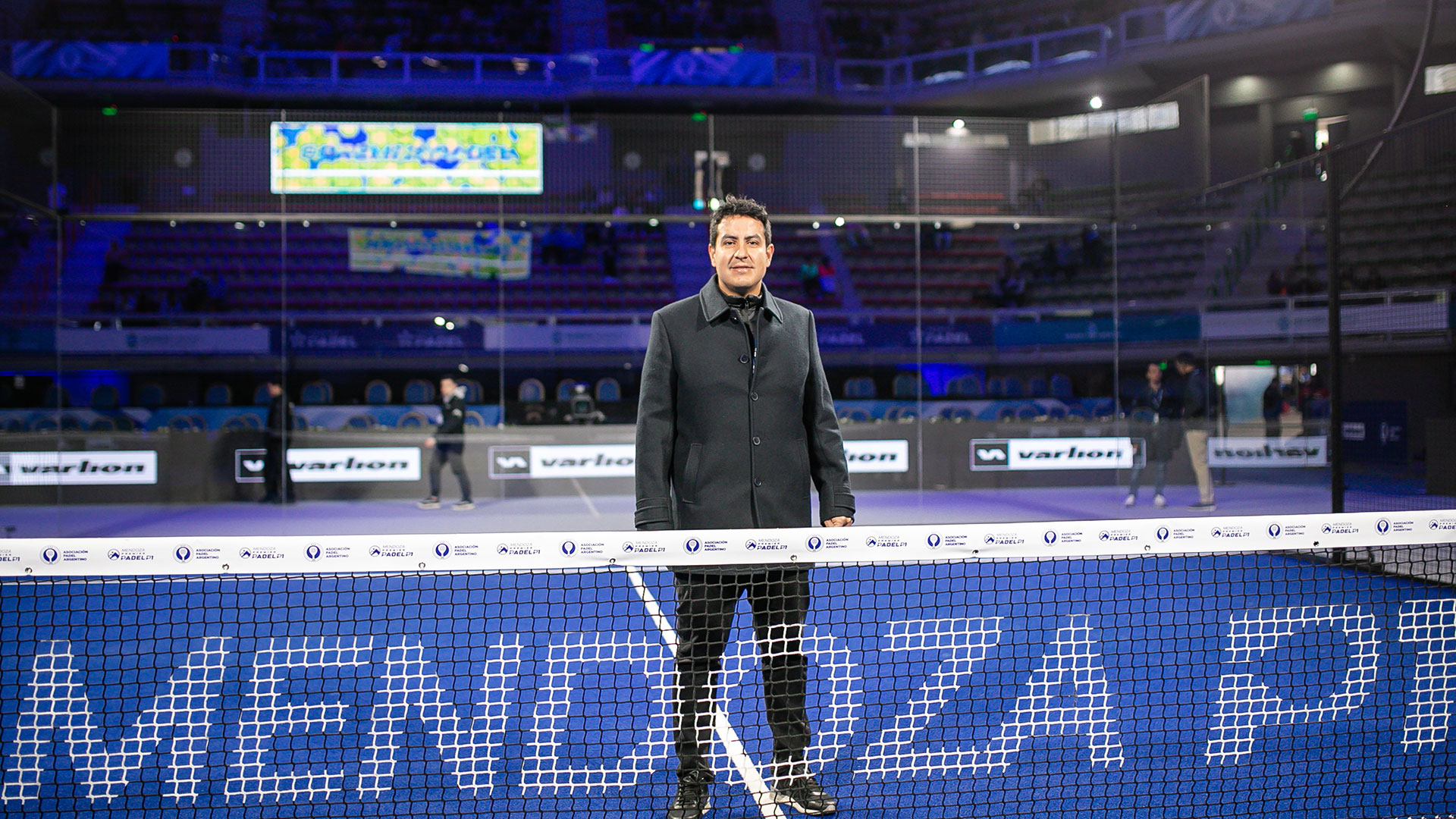 Brito maintains that when he thought about organizing the Mendoza Premier tournament, it was not only on the competitive side, but also thinking about the attractiveness for the people and fans of paddle tennis.

Mendoza became the epicenter of Argentine padel with the realization of a Premier that served as a showcase to show the first months of management of Santiago Brito at the head of the Argentine Padel Association (APA). In the current division of competitions that exists in paddle tennis, Brito decided to further amalgamate its link with the international federation (FIP) and support the circuit launched by the mother entity worldwide, since “we are founding partners and we must accompany”, he maintains, because from his vision World Pádel Tour -professional circuit still in force with which there is a bid at a global level- “it is an international event that has little interference in Argentina and I am interested in promoting Argentine sport in a way that allows us to return to being the center as in the ‘ 90 and not Spain. The FIP launched this circuit which seems to me to be a good showcase to continue promoting, because it is not just a tournament”. That’s why when the APA got the Premier for Mendoza, He did it from this perspective and planned it thinking not only of the competitive aspect, but also of the attractiveness for people and fans of paddle tennis.

Ten days before the start of the tournament, the APA launched an exclusive pre-sale of the stadium’s 9,500 seats aconcagua sand, only for members. In addition, the organizers decided to take the minors to compete alongside the greats. To do this, they not only moved the date of the Masters of the category -it was going to be July-, but they also moved it from Córdoba to Mendoza, “so that they come to play it in the stadium where the best play,” says the leader proudly. -, so the public can see the hotbed of Argentine padel”.

From the beginning of the competitions, people are encountering many surprises, “although they are not all the ones we wanted because, unfortunately, due to time constraints we could not add more. We are doing many things that show what Argentine padel is, it is our obligation”, says Santiago. 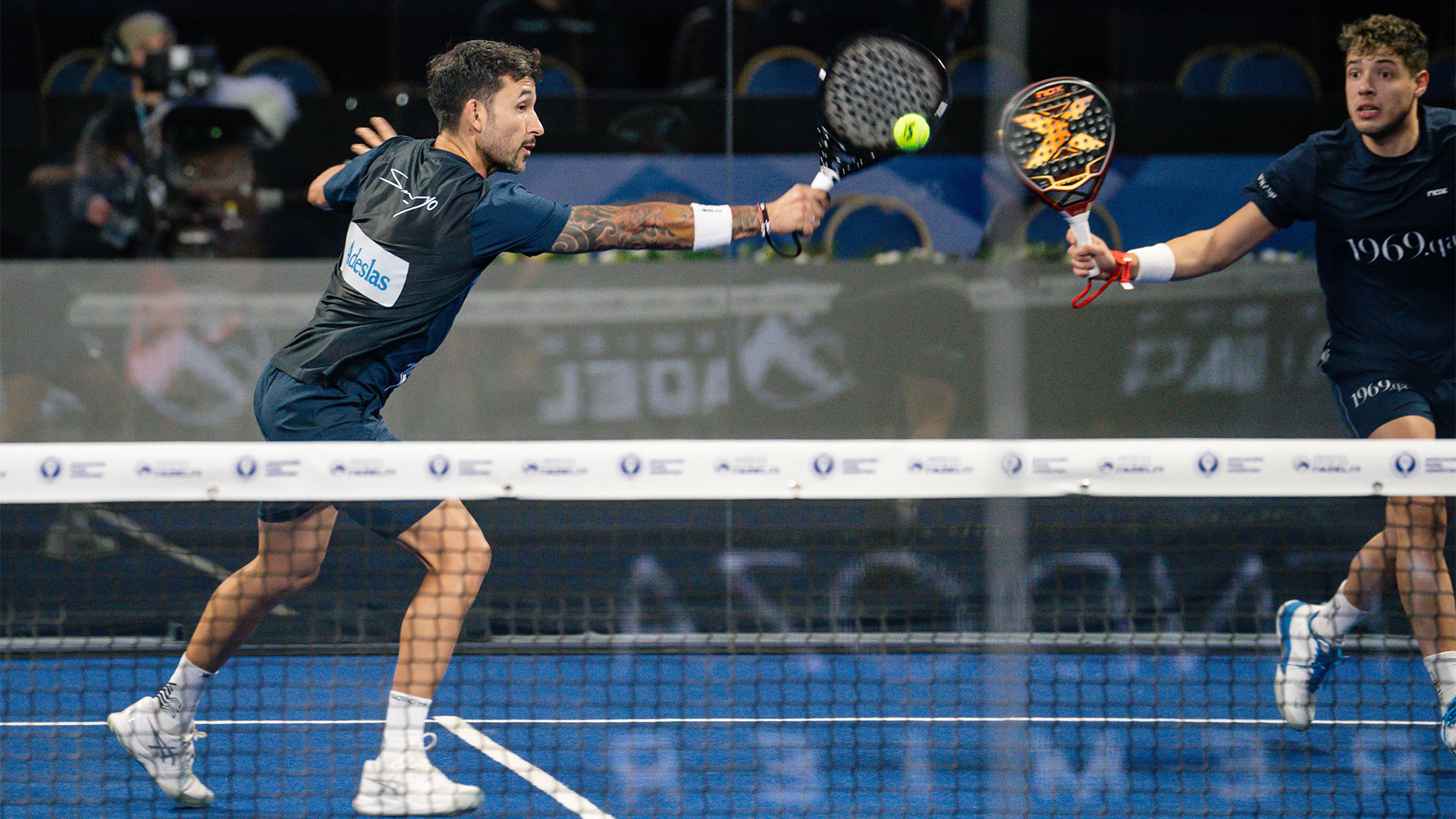 This international contest, organized by the APA, is part of the agreement generated to develop a superior circuit between the IFJ and Qatar Sport Investments (QSI), of the owner of the Paris Saint-Germain, It was declared of tourist and sports interest by the Ministry of Tourism and Sports of the Nation. Due to its Premier P1 category, it awards 1000 points for the ranking and summons the best pairs from around the world and it is an achievement that the current president of the padel association is proud to carry out.

Santiago Brito It has a long history linked to this sport. From the hand of his father Jorge, owner of the Macro Bank and founding member of the APA and the FIP, when he barely took his first steps in life he did so by circulating in that 20 x 10 rectangle surrounded by walls and wire that constituted the stage in which the first battles of an incipient game of balls, paddles and a net, which would quickly capture the attention of millions and become a highly competitive sport. “I think that one always has to feel like one more and support or guide a group, so that everyone can push forward, because when one calls himself the owner of some segment of paddle tennis, I think it is where he gets confused and diverts his gaze towards what really matters: that all this grows, that Argentina continues to be number 1 in the world and that everyone can play in the country”, says Tati, as his friends call the current president of the association. 34 years after those small steps, she decided to take an important step in her relationship with this sport, assuming the leadership of the governing body of Argentine padel. Although his arrival is related to statutory issues that did not allow him to remain at the top of the leadership ladder to the historic Cacho Nicastro, he himself was in charge of walking his proposal around the country, with the intention of updating a sport that seemed lethargic and waiting for an injection of energy to get up again: “I would have loved to live more in depth that time of San Jorge (club that brought together the main players in the late ’80s and early ’90s) and there were already great games and that is the fact that I am here, today, to bring back those times”, he affirms.

– Look, the first thing to do is think in pesos (he laughs), because at that time, the players won in dollars. Likewise, this can be put together very well because there are many companies interested in participating and supporting, whether it be the sport, the player or the circuit, and that is where my function is, to be able to fit all those rails. We have to make it possible to regenerate that, obviously, not in dollars, but by doing something that allows the players to live and participate in this. With this Premier tournament in Mendoza, even the qualifying players are paid in euros, they have been grateful for that and took it well. That’s a good sign.

Beyond the crises and the distance from the time of greatest boom, there are still popsicle factories that produce in the country, not with the same names by which they were known, “but they are in high demand, they are up to the task.” of the demands of the Argentines and continue to support growth. In fact, in the first months of management we made agreements with brands that have blindly trusted the project, because this comes hand in hand with a project that is not selling the brand to generate a business, but to generate a medium or long-term goal. term and that it be for the good of all “

In the ’90s, many criticized that in paddle tennis everything was for business and not for the sport itself and that, perhaps, was one of the causes of the setback that it had in diffusion and progress in Argentina, an image that the APA is trying to change today. Walking next to his father allowed Santiago to share the experiences of the past and incorporate a different perspective for leadership leadership. “I was able to talk about this with my father, because at the time I saw him out of love with paddle tennis and asked him why. ‘Everyone had his business and everyone had his own interest,’ he told me, and I noticed he was tired of it. So I think it was part of the estrangement from him. This is one of the mistakes that you have to learn from and that you have to try to modify when you have the possibility”, Brito acknowledges as one of the goals of his management. That is why he maintains that the APA projects should not be viewed as a business, but as something for which the association was really founded, “which is to promote and develop sport”, a fundamental role held by the leader, to that later “companies and businesses accompany growth”. “My arrival at padel driving had to do with this, with making my father fall in love again with this sport that he liked a lot, to which he gave so much love and from which he fell out of love”, Tati is sincere, with something of emotion.

Jorge, his father, the successful businessman and developer of paddle tennis in Argentina, passed away in November 2020 and will not be able to be part of this new management, but Santiago feels that it is as if he were with him and that, “surely, he will accompanies, but from another side”. 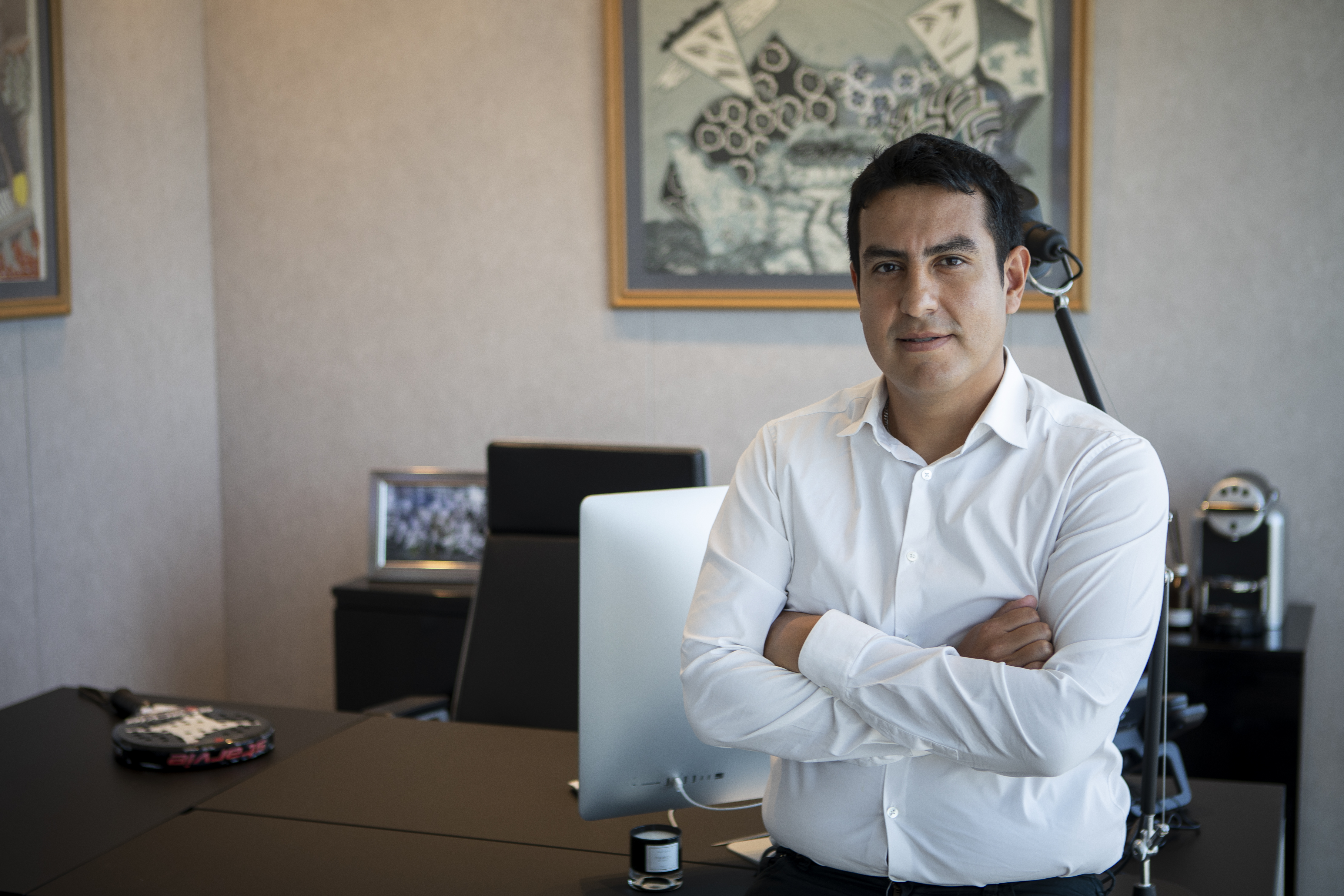 Brito is clear: “I am interested in promoting Argentine sport, that it be played again as in the ’90s and that Argentina once again be the center of paddle tennis and not Spain”

The APA is a non-profit civil association and must remain out of business that is not to develop the paddle, but for that, “first you have to change the mentality and think about the medium and long-term objectives”, maintains its president. That is why those who first went out to conquer were the affiliates and those who practice this sport, through different exclusive benefits. “The number is not very large”, but 15,000 affiliations is a good start for just 7 months of management. The important thing was to generate a bond of trust and there was a strong focus on a campaign to accompany affiliates with benefits “and we closed with clothing brands and palettes,” says Santiago, who made his presentation as a future sports host in Argentina in the World Cup in Qatar. “I experienced it almost as an amateur, it helped me to introduce myself and get to know the world I was going to live with. From there, everything was to do a little more of the management that is aimed at the medium and long term, depending on the case. And this is my difference, because paddle tennis has a short-term view and I think that’s a mistake. We work on something that is stable, for everyone and not for a select group, because the function of this association is to promote the sport and the Argentine padel”

After that first experience, and already as president, Brito focused on trying to correct those things that did not seem good to him, to sustain or improve the performance of the Argentine teams. “The previous World Cup escaped us for nothing, but there were details that may have conspired and that we will try to improve. We have to arrive calmer and enjoy it in a different way, for that we have to go well planned and have what we have to have to win a World Cup, ”explains the leader, who met with the coaches and technicians to establish his vision. He replaced the heads of the teams (Mocoroa, for men, and Nito Brea, for women), to incorporate Rodrigo Vidal and Gaby Reca, respectively. “Both share the circuit permanently, they are in the day to day with the No. 1 and up to date with the current situation of each player,” argues Santiago, regarding the changes. 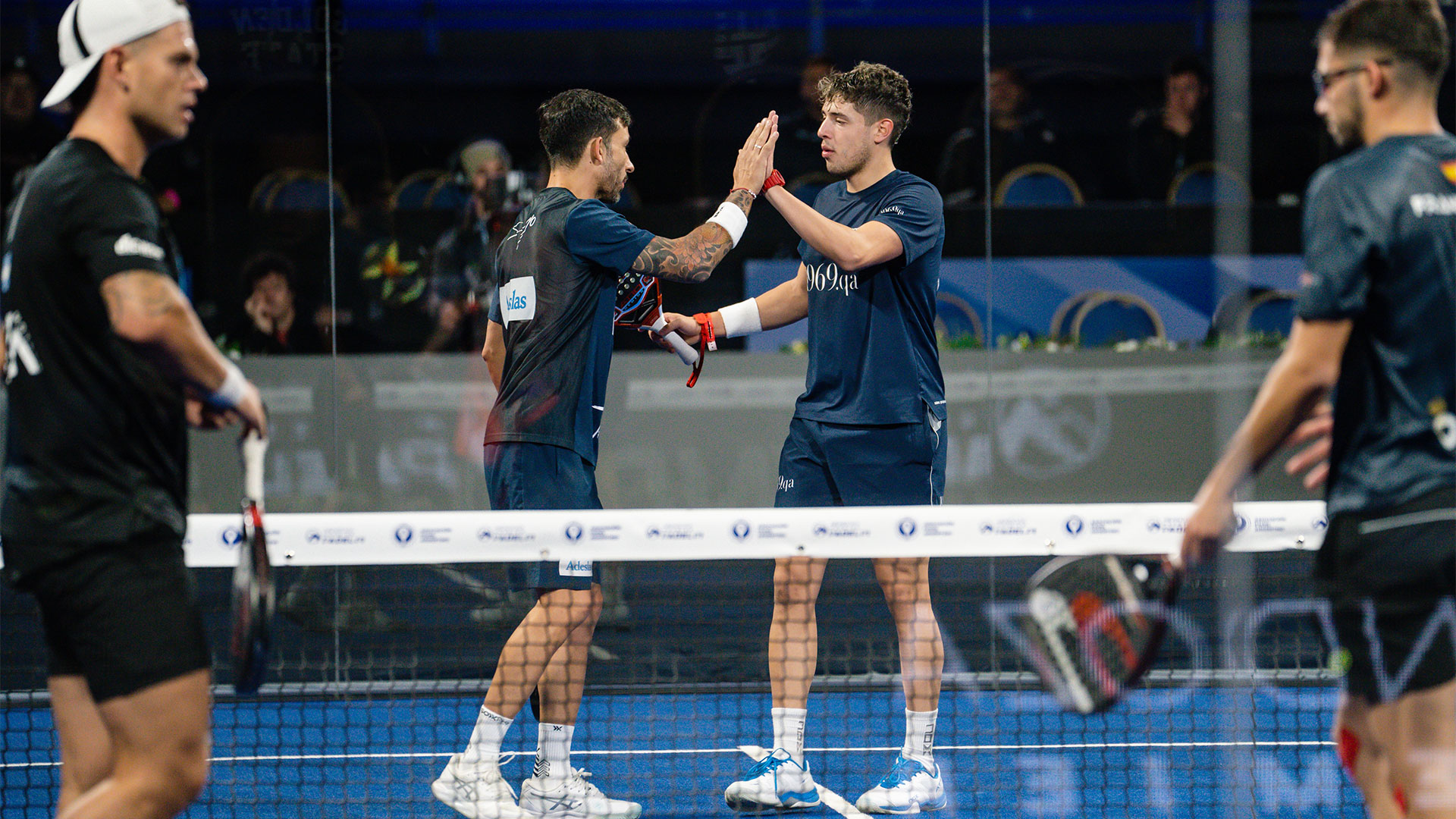 On the other hand, the new management of the APA made a mea culpa for what had been done by the previous management and recognized errors in the treatment of the members of the teams. “We are the ones who have to take the players and in good condition, because they are the ones who represent us, they are our flag,” Brito emphasized. That is why the members of each team will not have to pay for their tickets and will not have to worry about clothing, “because, now, everything will be better planned.” “I am not inventing nor am I doing something different from what they do with the other teams in other sports -he continues-, this is going to make it possible for us to arrive at the World Cup a little more planned and with a little more chances.”

Before assuming, the questions to the future president of the APA revolved around certain names and personalities that generated internal conflicts within the padel organizations at the national level. The six-month period that he had requested was met and he began to move the pieces. Those who were willing to accompany remained and the rest stayed aside, because one of Brito’s objectives was to open up from that old experience and open a new one. “I am interested in promoting Argentine sport, that it be played again like in the ’90s and that Argentina once again be the center of paddle tennis and not Spain”proposes from its new leadership.