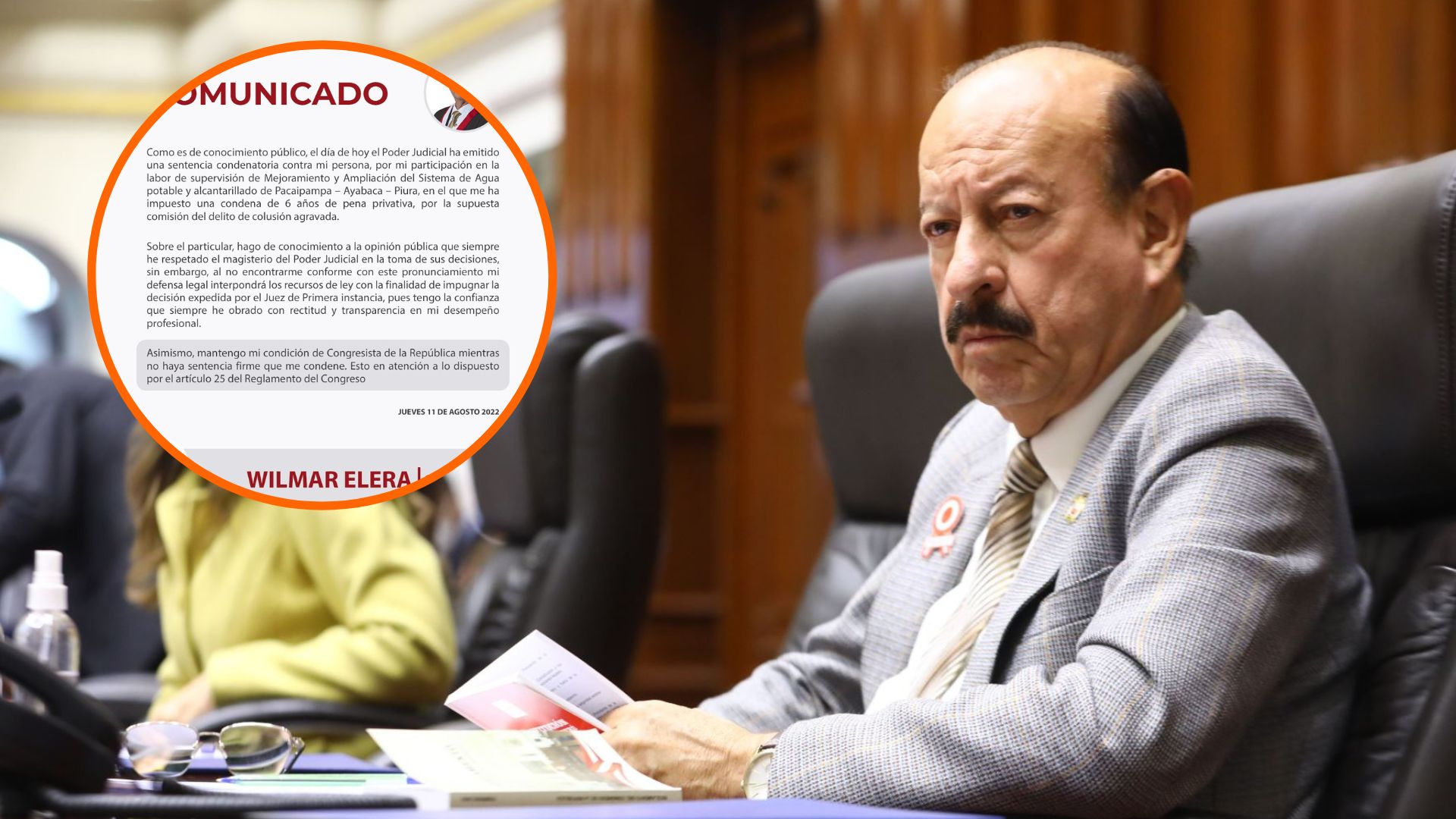 After confirming the 6 years of effective prison against him, Wilmar Elera, parliamentarian of the Somos Perú caucuspublished a statement on their social networks to “clarify” their position regarding said measure.

In the letter, the legislator announced that he will appeal the measure chosen by the Judicial Powerl, because he rejects the custodial sentence, which was imposed for alleged commission of the crime of aggravated collusion.

“I have always respected the teaching of the Judiciary in making its decisions, however, since I am not satisfied with this pronouncement, my legal defense will file the legal resources,” he wrote on his official Twitter account.

“The purpose is to challenge the decision issued by the Judge of first instance, since I am confident that I have always acted with integrity and transparency in my professional performance,” he added in his publication.

Secondly, the congressman indicated that he continues to belong to Parliamentuntil there is a “final judgment” that condemns him, according to the regulations of the Legislative, reiterating that he does not accept what was decided by the Seventh Unipersonal Criminal Court Specialized in Crimes of Corruption of Officials of Piura.

“I maintain my status as a Congressman of the Republic as long as there is no final sentence that condemns me. This in response to the provisions of article 25 of the Regulations of Congress, ”he warned in his statement. 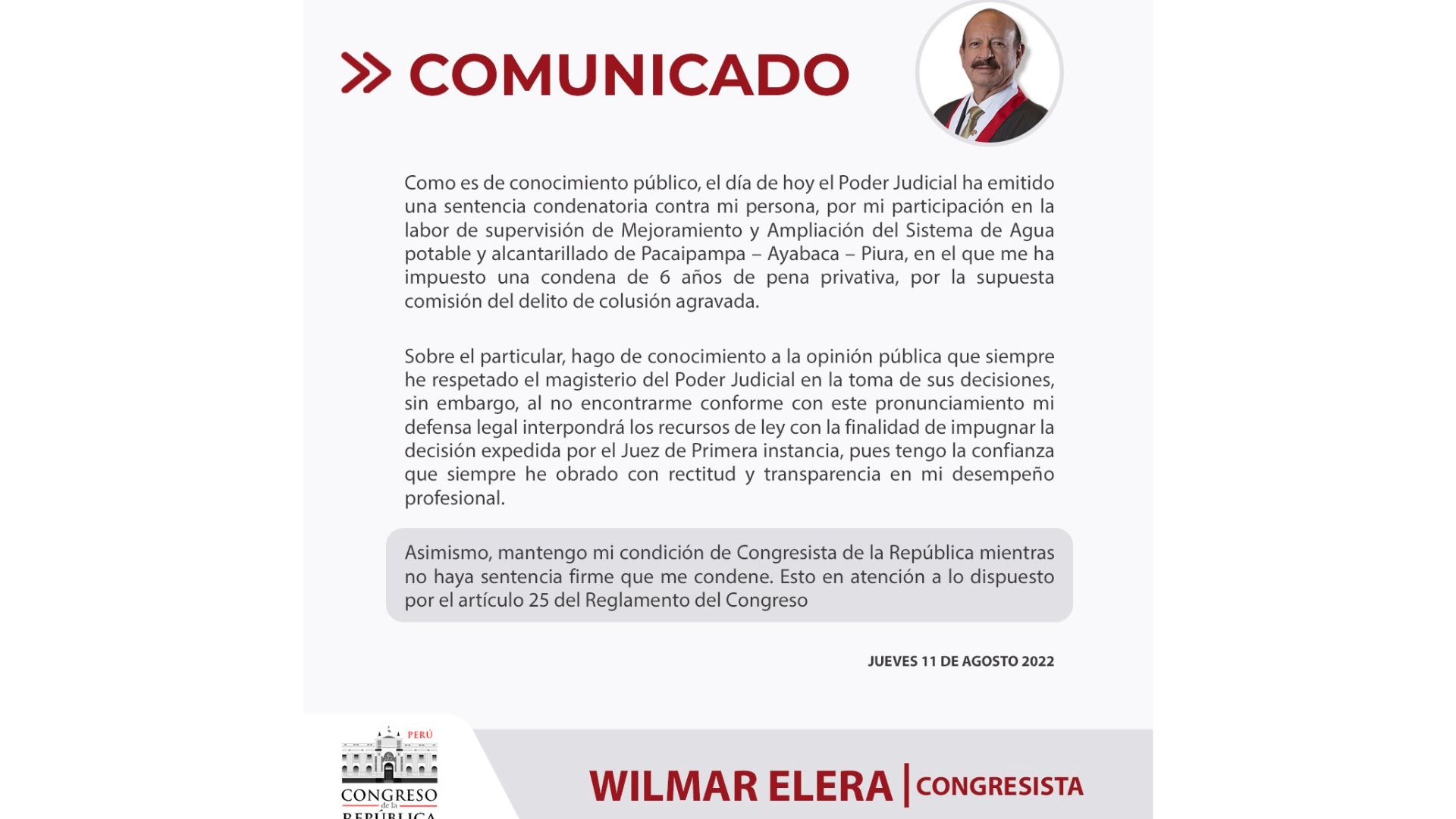 Congressman ruled on his sentence.

As recalled, this Thursday, August 11, the sentence against the former member of the Congressional Board of Directors, Wilmar Elerafor serving as supervisor of the “Improvement and Expansion of the Potable Water and Sewage System of Pacaipampa – Ayabaca” in 2012.

The legislator involved in this investigation did not act alone, they also figure in the process Wilder Alexander Mogollón and the contractor José Luis Cortegana Sánchezwho were sentenced to pay civil damages jointly amounting to S / 100 thousand.

Wilmar Elera He is not a parliamentarian necessarily known for the work or proposals for laws that he has carried out in favor of the country, since, in addition to registering a list of complaints, sentences and investigations for various crimes, he pronounced inopportunely on the case of vsexual assault involving one of your colleagues.

This fact is recorded in the last days of July, where a congressional worker denounced the parliamentarian Freddy Diaz, for doping and raping her inside Parliament. just hours later, Wilmar Elera (We are Peru) offered an interview in an interview for TV Peru with some unfortunate statements regarding the case.

“I think the lady is the only woman who works in the all-male space, which has created a much more conducive environment, especially when they start drinking liquor”, expressed at the time, causing criticism from political leaders, citizens and netizens.

Even the news anchor, Julio Navarro, made it clear to him on national television that it was forbidden, in any public entity, to bring alcohol or smoke into public spaces.

On the other hand, the former member of the Board of Directors pointed out that the entry of liquor should be prohibited to any office of Parliament and promised to coordinate with the head of Congress, Lady Camonesso that there is a “provision that prevents parliamentarians from celebrating inside the offices.”

“I think it should have been applied, but to some it escapes; Some parliamentarians believe that his work area are areas where they can have fun and, in this case, Congressman Díaz exceeded his functions ”, accurate.

Wilmar Elera: Judge orders the capture and internment in a prison of the congressman
Who is Wilmar Elera, the congressman who justified the alleged rape of a worker by legislator Freddy Díaz
Wilmar Elera’s accessory received a millionaire incentive from the Municipality of Sechura but it did not correspond to him