Video: the moment of a ferocious crime in which a thief killed a man with 14 stab wounds to steal his cell phone


This is how they murdered a man in the Balvanera neighborhood

The prosecutor Santiago Vismarahead of the National Criminal and Correctional Prosecutor’s Office No. 2, today published photos and videos of a violent homicide that occurred six months ago in the Buenos Aires neighborhood of Balvanera. The footage shows the moment in which a young man stabbed to death and stole the cell phone from a Colombian citizen. Prosecutor Vismara revealed the footage so that citizens can provide some information to identify the murderer.

The prosecution reported that the incident occurred around 4:30 on February 6 on Catamarca Street at 100 in the Federal Capital. “The victim carries a cell phone in his right hand, it is seen in both videos, as bright. The aggressor tries to buy him a beer and then demands that he give him his cell phone. There the victim tries to save it, and the other begins to stab him. In the end, when she leaves, you see how the perpetrator takes the cell phone”, the prosecutor Vismara told Infobae.

And he added: “The sequence was recorded on a security camera in the area, where the attacker is observed, who has white skin, brown hair and an estimated height of between 1.70 and 1.75 meters. Also, would have two tattoos: one on the left forearm and one on the left side of the neck, below the ear”.

This is how they murdered a man in the Balvanera neighborhood

The Vismara prosecutor’s office requested that “all those people who can provide information about the act or the identity of the aggressor who communicate with the prosecution, to the phone (011) 4813-7113 or to the emails [email protected], or [email protected]”.

The victim’s name was Juan Carlos Gonzalez Mahecha49, was of Colombian nationality and lived in the city of La Plata with his partner, but “He used to leave his house for two or three days because he had problems with alcohol consumption, ”said the sources of the case.

In the videos, it can be seen that González Mahecha walks unsteadily, with his cell phone in his hand and with his ripped pants next to the killer. According to sources in the case, the Colombian citizen he could have participated before this sequence in a fight that had taken place in a bar.

In the images it is seen that the murderer offers the victim to drink from a can of beer, until at one point, the unidentified young man punches him, corners him next to a parked car and begins to stab him. 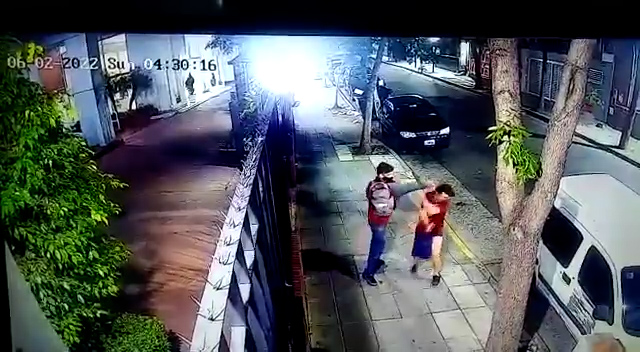 Capture of the footage

In the span of 48 seconds and while they struggle, the murderer is seen applying at least 14 stab wounds, after which, He grabs the cell phone from his victim’s hand, and runs away.

According to the sources consulted, around 6 in the morning, Gonzalez Mahecha He died at the Ramos Mejía Hospital, where he had been transferred from the scene by a SAME ambulance.

The case was classified as robbery and homicidewith an unknown author, although now, with the dissemination of the images, the researchers trust that someone can provide some information to give the murderer a name and surname.

Five dead babies in a hospital in Córdoba: the drama of a mother and a grandmother and the “high levels of potassium” in two bodies
A city policeman killed a motorcycle that tried to rob him in Merlo
The Buenos Aires government will fire a commissioner for the arrest of the driver who wanted to cross a picket line
They broke up a drug gang and there are two fugitive police officers from Buenos Aires