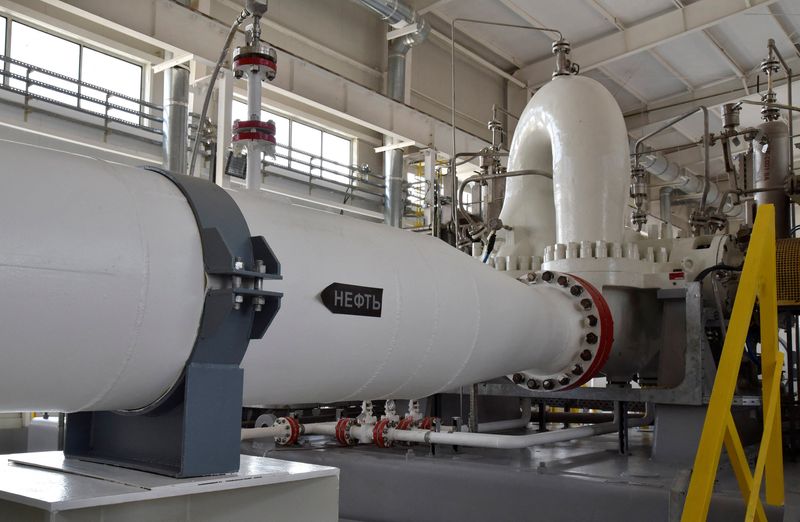 An interior view shows a new pumping station of the Caspian Pipeline Consortium (CPC) near the city of Atyrau, Kazakhstan, October 12, 2017. REUTERS/Mariya Gordeyeva

MOSCOW/LONDON, Aug 12 (Reuters) – Kazakhstan is expected to sell some of its crude through Azerbaijan’s biggest pipeline from September, as the country seeks alternatives to a route Russia has threatened to close, three sources familiar with the matter said.

Kazakh oil exports account for more than 1% of world supplies, or about 1.4 million barrels per day (bpd).

For 20 years, they have been shipped through the CPC pipeline to the Russian port of Novorossiysk on the Black Sea, which gives access to the world market.

In July, a Russian court threatened https://www.reuters.com/business/energy/caspian-pipeline-fined-russia-suspension-lifted-2022-07-11/#:~:text=MOSCOW%2C%20July %2011%20(Reuters),a%20global%20oil%20supply%20crunch with closing the CPC, prompting the Kazakh government and major foreign producers to enter into contracts for other outlets as a precautionary measure.

Neither alternative is as practical as the CPC pipeline, which increases the risk of further volatility in energy markets.

Shortly after Russia invaded Ukraine in February, international crude oil prices hit 14-year highs and prices have remained high, holding an average of over $100 a barrel in July.

A source with direct knowledge of the matter said that the Kazakh state oil company Kazmunaigaz (KMG) was in advanced talks with the commercial arm of the Azerbaijani state company SOCAR to allow the sale of 1.5m tonnes/year of Kazakh crude through the Azeri pipeline supplying oil to the Turkish Mediterranean port of Ceyhan.

At just over 30,000 bpd, the volume is a trickle compared to the usual 1.3-1.4 million bpd flowing through the CPC pipeline.

The final contract will be signed at the end of August and flows through the Baku-Tbilisi-Ceyhan (BTC) pipeline will start a month later, according to the source.

Another 3.5 million tons of Kazakh crude oil could start flowing in 2023 through another Azeri pipeline to the Georgian port of Supsa, in the Black Sea, according to two sources consulted.

Relying on Azerbaijan would allow Kazakhstan to bypass Russian territory. Last month, BP Azerbaijan said it would divert flows from the Baku-Supsa pipeline to the larger BTC pipeline.

However, the new BTC route means that Kazakhstan will have to rely on a fleet of small tankers to bring its oil across the Caspian Sea to Baku from its Aktau port, which has limited reserve capacity, the sources said.