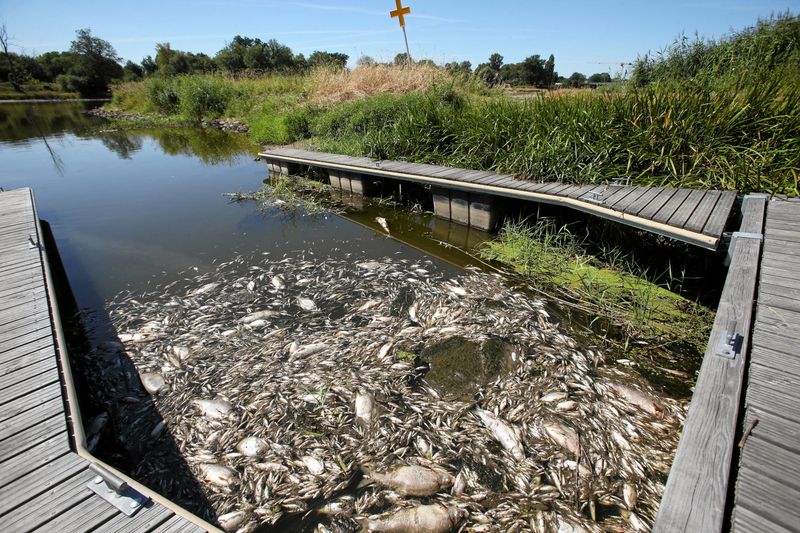 Dead fish float on the surface of the Oder river, as the water has been polluted and is causing mass extinction of fish in the river, in Bielinek, Poland, August 11, 2022. Cezary Aszkiełowicz/Agencja Wyborcza.pl via REUTERS

BERLIN, Aug 12 (Reuters) – An unknown and highly toxic substance in the Oder river, which runs along the border between Poland and Germany, appears to be the cause of a massive fish die-off, according to the Environment Ministry of the German state of Brandenburg.

An analysis of river water carried out on Monday showed evidence of “synthetic chemical substances, most likely also with toxic effects on vertebrates,” the ministry said on Thursday, adding that it remained unclear how the substance entered the water.

According to local broadcaster rbb, a state laboratory found high levels of mercury in the water samples.

However, the head of Poland’s national water management authority told private broadcaster Polsat News that the presence of mercury in the water had not yet been confirmed.

“At the moment, these are press articles. We don’t have any confirmation about the presence of mercury in the Oder,” said Przemyslaw Daca, director of Polish Waters.

The ministry for Brandenburg, the state surrounding Berlin, said it had not yet been possible to assess how many fish had died in Poland and Germany.

(Reporting by Anna Wlodarczak-Semczuk; writing by Rachel More; editing by Hugh Lawson; translated by José Muñoz in the Gdańsk newsroom)