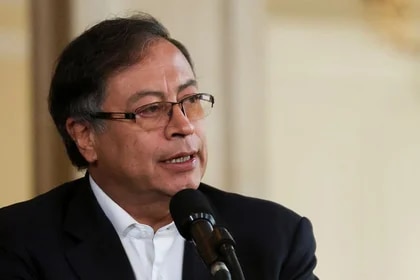 The president of Colombia, Gustavo Petro Urrego, once again put on the table the debate on the legalization of cannabis for the economic benefit of peasants in Colombia. PHOTO: Reuters

The debate on the legalization of cannabis returns to the ring on behalf of the president Gustavo Petro, who put on the table the regulation of this plant for recreational and industrial use for the benefit of peasant producers. He so indicated during his first visit to Quibdo as president-elect and in the framework of the Summit of Mayors of the Pacific, which also had among its guests the vice president, France Marquez.

In this city, where he also held his first security council as president, he suggested that the legalization without licenses would bring a great economic advantage not only for the country in general, but also for peasants in departments such as Cauca.

“What happens if cannabis is legalized in Colombia without licenses, like planting corn, potatoes? With that we see if that is exported and we earn a few dollars, because in a good part of humanity it is legal”, questioned the president, adding that it is the peasantry that should benefit economically from this measure and not the foreign multinationals.

“What, Is it going to be the Canadian multinational that keeps the dollars and makes the cannabis plantations, or is it going to be the peasants of Cauca?Petro added amid applause from those attending a meeting, in which several leaders of the Pacific departments were also present.

You may be interested in: Ministry of Environment published guidelines for the use of rainwater and sediment management

peter urrego He also referred to those who were criminalized for planting cannabis in their territories and who are currently serving sentences in prisons. In this regard, he said that in a scenario in which the planting of these crops is legalized in large proportions,and that eliminate the stigmatization and judicial persecutionl.

“What, and then if we are going to legalize cannabis, are we going to keep all these people imprisoned in overcrowded jails? Or has the time come to release many people from prison simply because they were criminalized for something that in a good part of the USA is it legal?” asked the president; He even suggested that this measure should go hand in hand with the demobilization of armed groups to carry out cultivation work in areas such as the Pacific Coast.

In this sense, he raised the possibility of unifying the population of Tumaco and Bonaventure after the demobilization of armed agents who control this area for cocaine trafficking and that, instead, those who live in these areas improve their economy through the cultivation of cannabis. He also said that the fraction of the Pacific Coast that remains in Colombia is the poorest in the world.

“Let’s gather people, even if those who are armed arrive unarmed. doWe are going to kill ourselves in the poorest region of the Pacific Coast of the world or isn’t there a much more profitable opportunity to link Buenaventura and Tumaco in the hands of their population?”, adding that Buenaventura’s neighbor is Japan and, in that sense, proposing economic alliances with that country for the benefit of that area of ​​southwestern Colombia. .

Subsequently, he publicly entrusted the vice president with the mission of working to overcome the inequity and inequality that exists in the Pacific, specifically in Chocó and the port of Buenaventura.

Dialogues between the government of Gustavo Petro and the ELN: Iván Cepeda, Foreign Minister Álvaro Leyva and High Commissioner for Peace are already in Cuba
Polo Polo protested taxes on ice cream in the tax reform: “Behind there is a peasant and a vaquita”
Due to combats between the Gulf clan and the ELN, there are more than 600 displaced in the south of Bolívar