After a long day of protest —which generated traffic chaos—, the Piquetera Unit decided to set up tents in the Plaza de Mayo to spend the night at least until tomorrow, Thursday, as part of a general demand through which they request a meeting with the new economy minister, Sergio Massa. The measure of force was announced after 6:30 p.m. by Eduardo Belliboni, a referent of the PO.

In the early hours of the afternoon of this Tuesday, the groups converged in front of Pink House and padas the 14 representatives of the Piquetera Unit were received by the director of institutional affairs of the Ministry of Economy. After the brief meeting, Eduardo Belliboni —a referent of the Piquetero Unit— indicated: “The response from the Ministry of Economy was zero.” 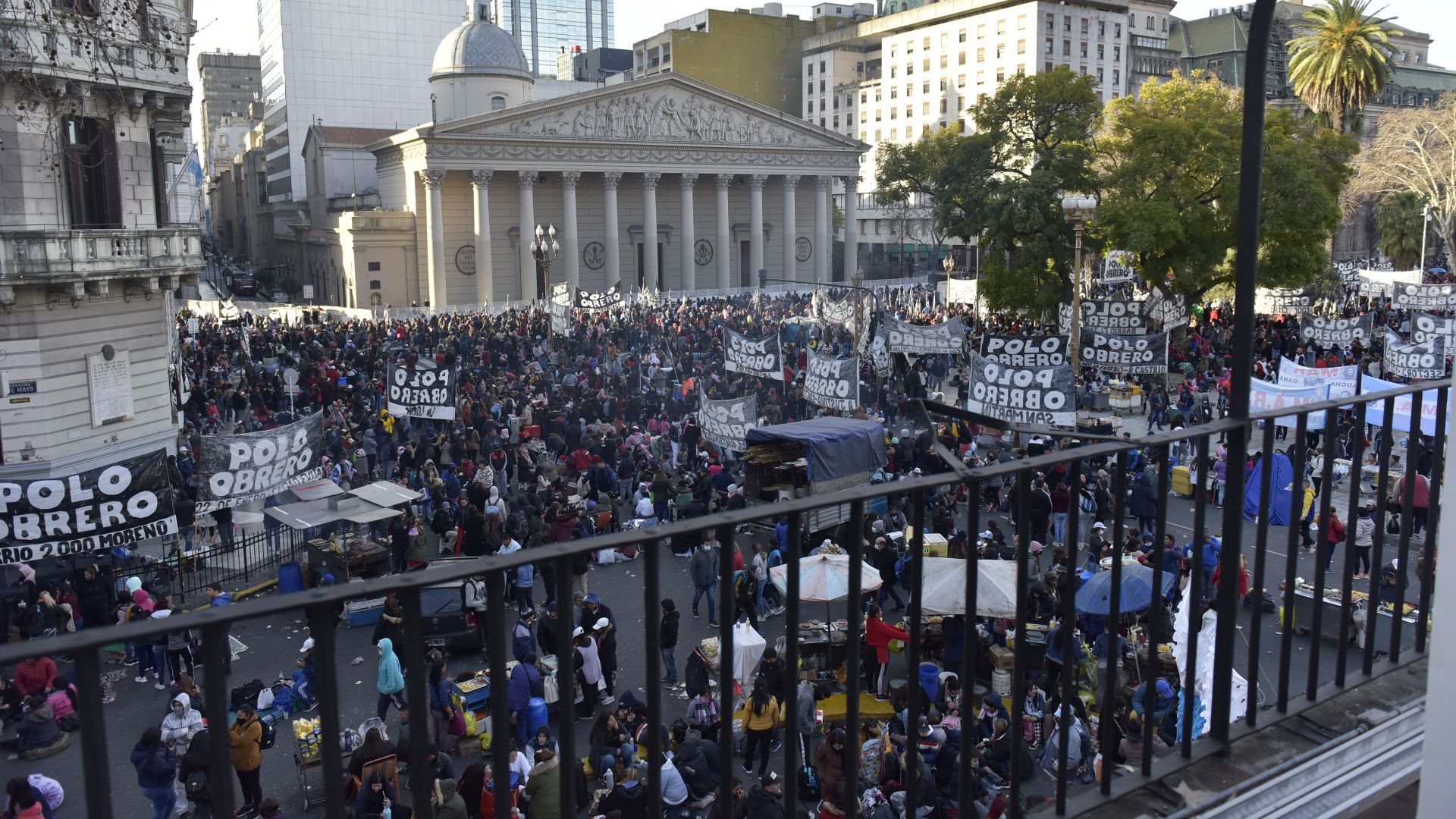 Regarding the possibility of raising tents to spend the night in the Plaza de Mayo, Belliboni pointed out: “It is not yet known, we will discuss it in a while”. The decision will be made after the assembly scheduled for 6:00 p.m.

The purpose of the protesters is to achieve a meeting with the new holder of the portfolio, who around midday today accompanied the President during an official act organized in the Buenos Aires town of Salliqueló. Around 5:00 p.m., the Social Development building — portfolio headed by Juan Zabaleta — was surrounded by columns of picketers. “We released the 9 de Julio to ask for a meeting with Zabaleta and it seems that he is going to receive us. We hope to be able to see him urgently due to the serious social problems”, the referent of the Polo Obrero emphasized then. before getting into the building. There was also a burning of tires in the place and the protesters left a request for a meeting with the holder of the portfolio. 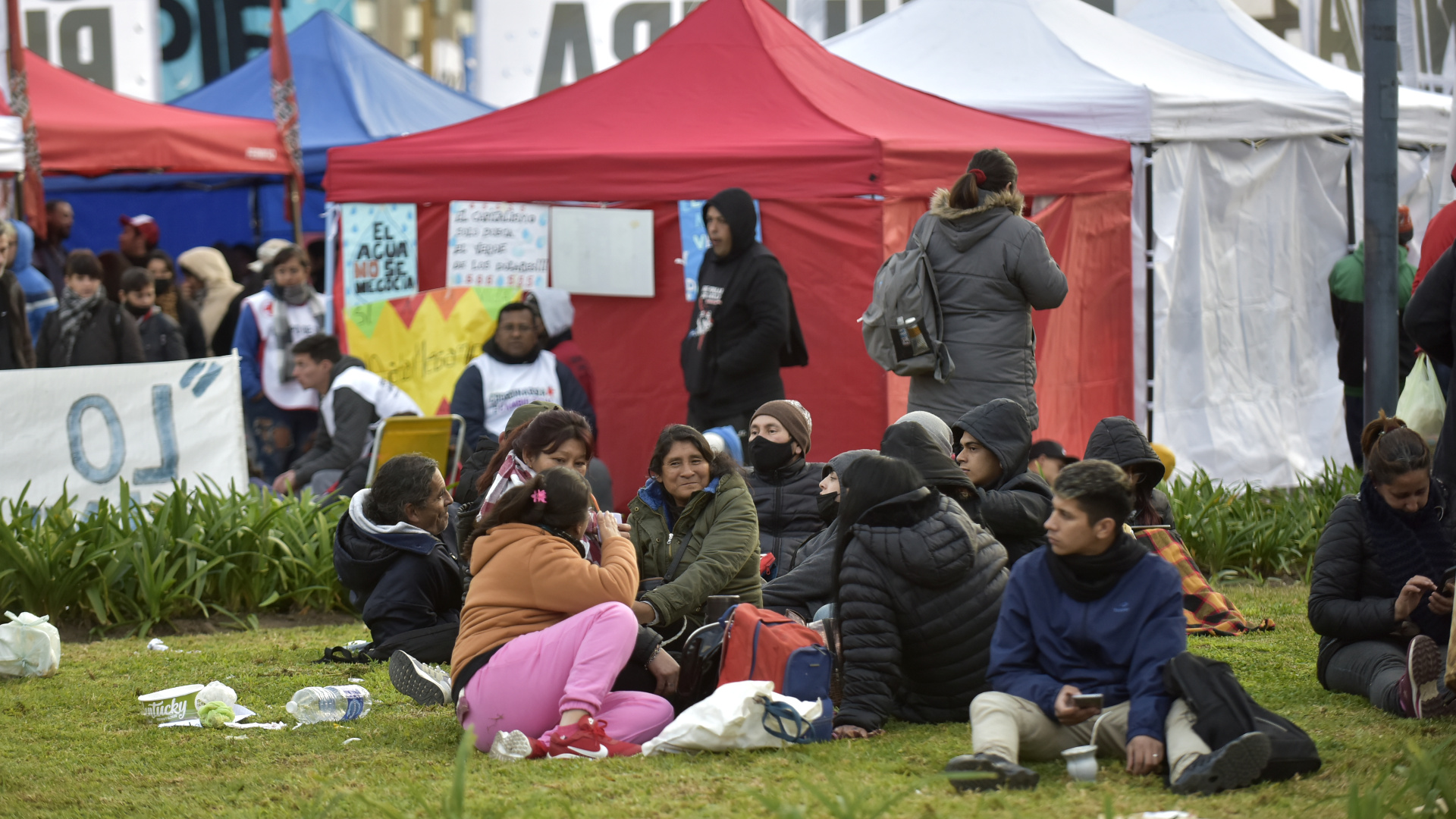 In the brief meeting with the director of institutional affairs, in the early hours of the afternoon, the representatives of the Piquetero Unit They brought a document to request a meeting with the new holder of the portfolio. “We request that you urgentgiven the nature of the food emergency, a meeting to bring our demands for updated income from social programs and people in a state of vulnerability, aggravated by the increase in the inflationary process that is destroying the purchasing power of workers with income lazy”, says the document.

Then, regarding the claims, the text indicates: “We request an increase in the minimum vital and mobile salary that reaches the Basic Basket and an emergency bonus of $20,000 that partially covers the loss of income at the moment”.

The leftist social organizations opposed to the government of Alberto Fernández, in addition to demonstrating in front of the Palacio de Hacienda, carry out cultural and street activities in front of the Cabildo and the Cathedral “in the framework of permanence”. The protest in the downtown area of ​​the City of Buenos Aires, in turn, generated traffic chaos that affected private vehicles and also public transport. 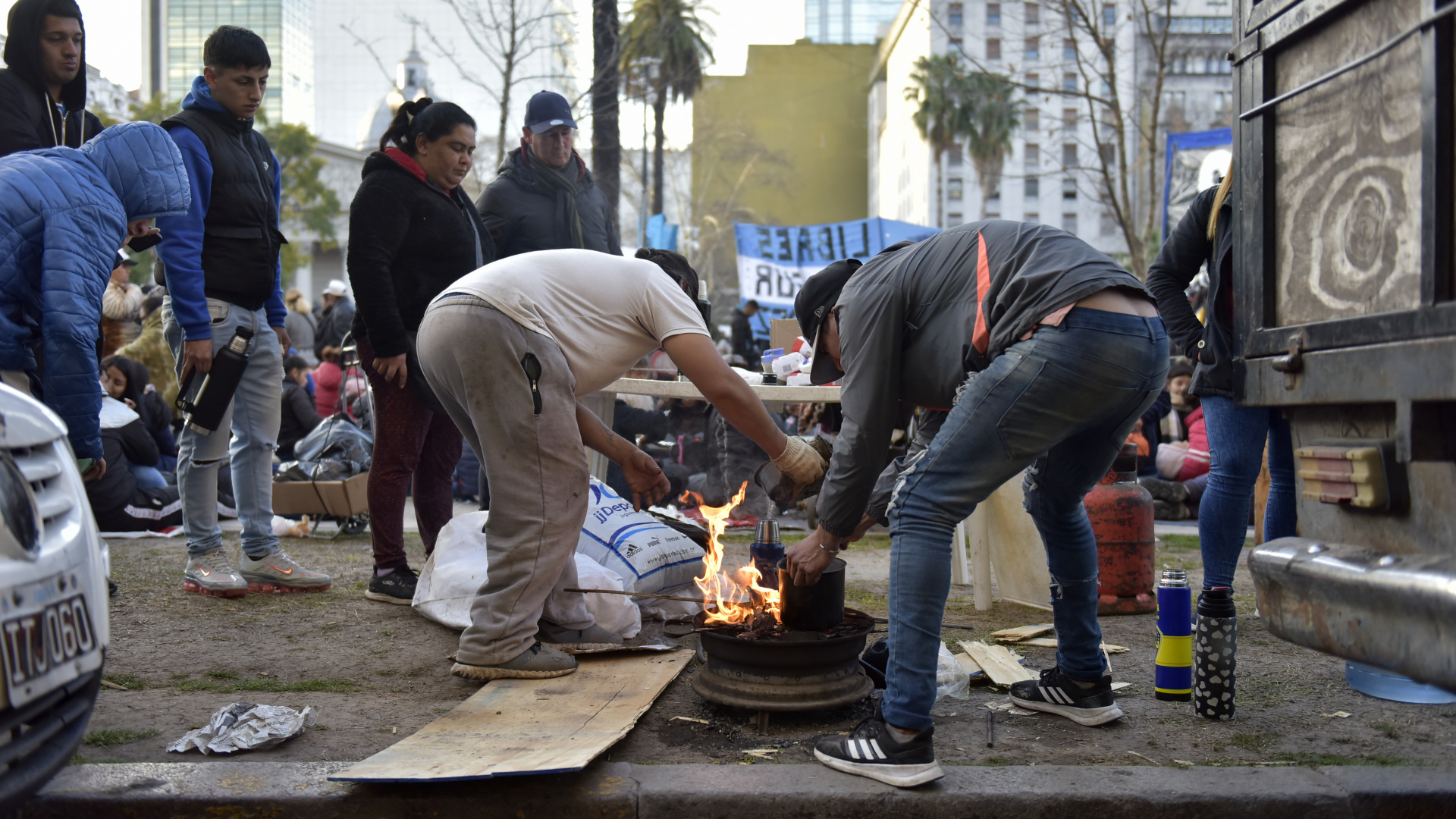 “We are going to stay in the Plaza de Mayo so that the Minister of Economy, Sergio Massa, will receive us.”I had anticipated Belliboni to this medium.

Militants from different organizations belonging to the Piquetera Unit (UP) had begun their march this morning towards Plaza de Mayo to demand a bonus for retirees and monotributistas, among other demands. 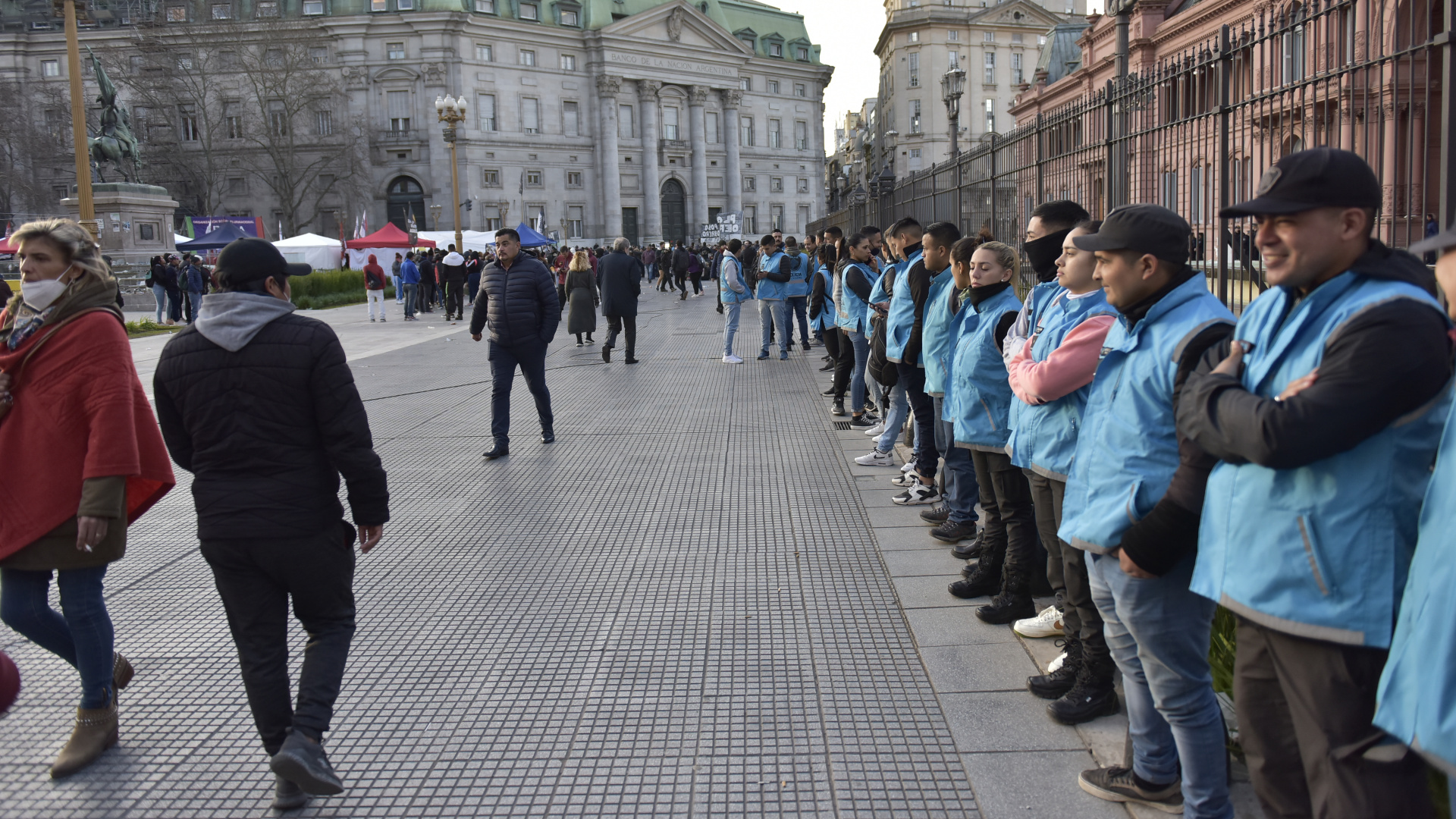 The protesters of Polo Obrero, the MST Teresa Vive, the Barrios de Pie Movement and factions of the Darío Santillán Popular Front they concentrated from the morning on different sections, which generated traffic jams and difficulties to circulate in the downtown. Initially, the columns started from the corners of Avenida de Mayo and 9 de Julio, the Obelisk and Belgrano and 9 de Julio avenues. After concentrating on those meeting points, they circulated towards Plaza de Mayo.

The list of demands includes the universalization of social programs, among them the so-called Empower Work, in turn more food for the popular dining rooms and picnic areas and will demand “that the delivery of the promised tools and machinery for more than three thousand ventures”.

“This week a scandalous inflation is announced that in food will exceed two digits. That will lower to the poverty line more than fifty percent of the working population”, recalled the leader of the Polo Obrero (PO).

By 4:00 p.m., according to estimates, most picketers from Buenos Aires municipalities such as La Matanza, Lomas de Zamora, Moreno, Merlo, Berazategui, Esteban Echeverría, Lanús, Presidente Perón, Almirante Brown and CABA, among others, managed to concentrate on the May Plaza. 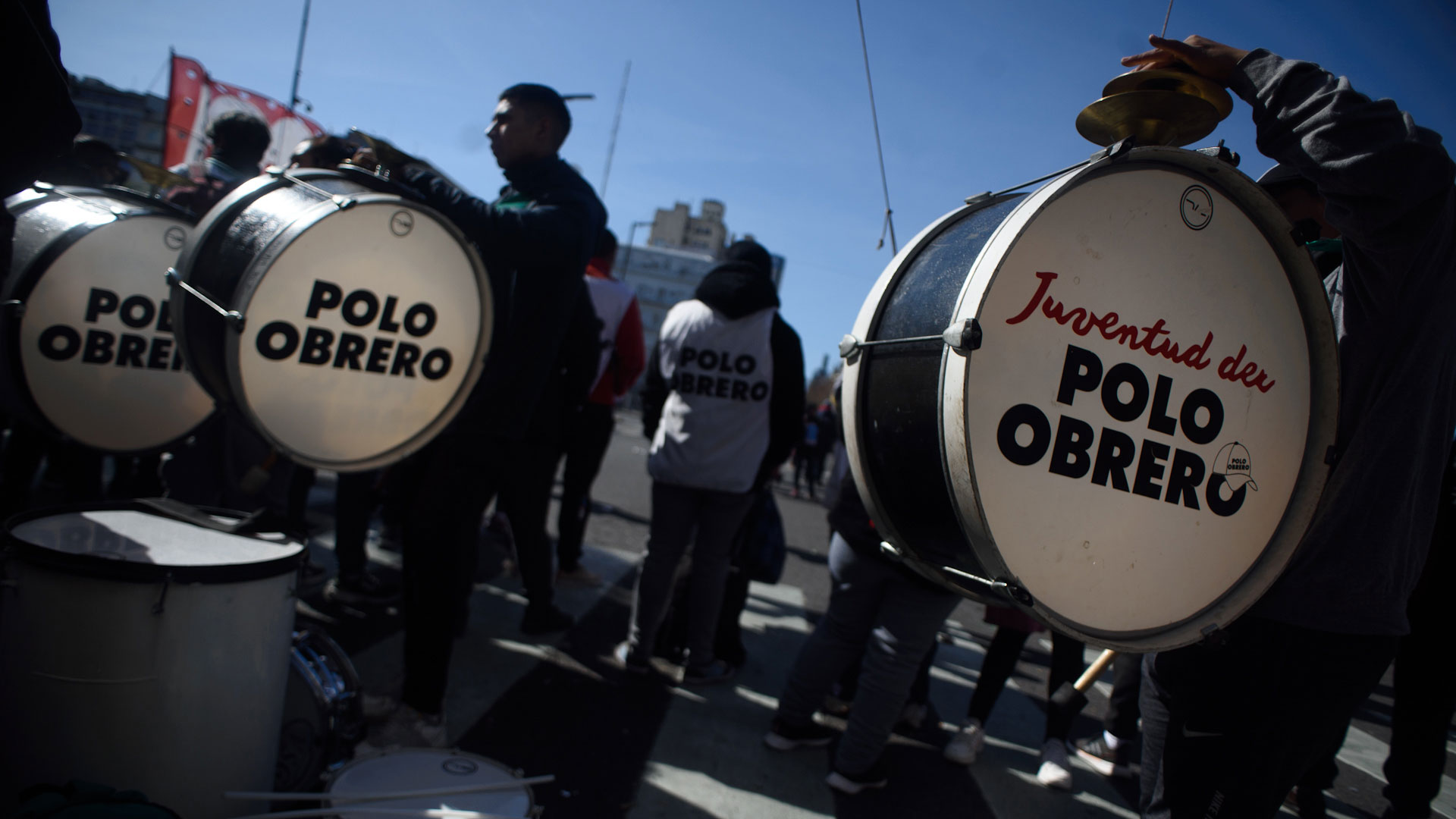 “We are going to stay in the Plaza de Mayo so that the Minister of Economy, Sergio Massa, receives us,” said the leader of the Polo Obrero, Eduardo Belliboni (Adrián Escándar).

The piqueteros leaders hope to be received by the brand new Minister of Economy. the encounter it was not on the agendaas far as he could tell Infobae. The hearing was requested last week. There was no response and the leaders refuse to be heard by “third-level officials.”

In the petition, the Piquetera Unit requests an update on the amounts of the programs such as the Boost Work and the food card; increase in the Minimum Vital and Mobile Salary and an emergency bonus of 20,000 pesos.

Through a statement, the piqueteros denounced: “The adjustment is reaching the food that does not come to the soup kitchens, to the compañeros who are unemployed and do not even have a social program that helps them put a plate of food in the table”, for this and other reasons, the left-wing movements founded today’s forceful measure, which may extend for several days under the slogan: “We do not accept that the crisis is paid by the workers”. 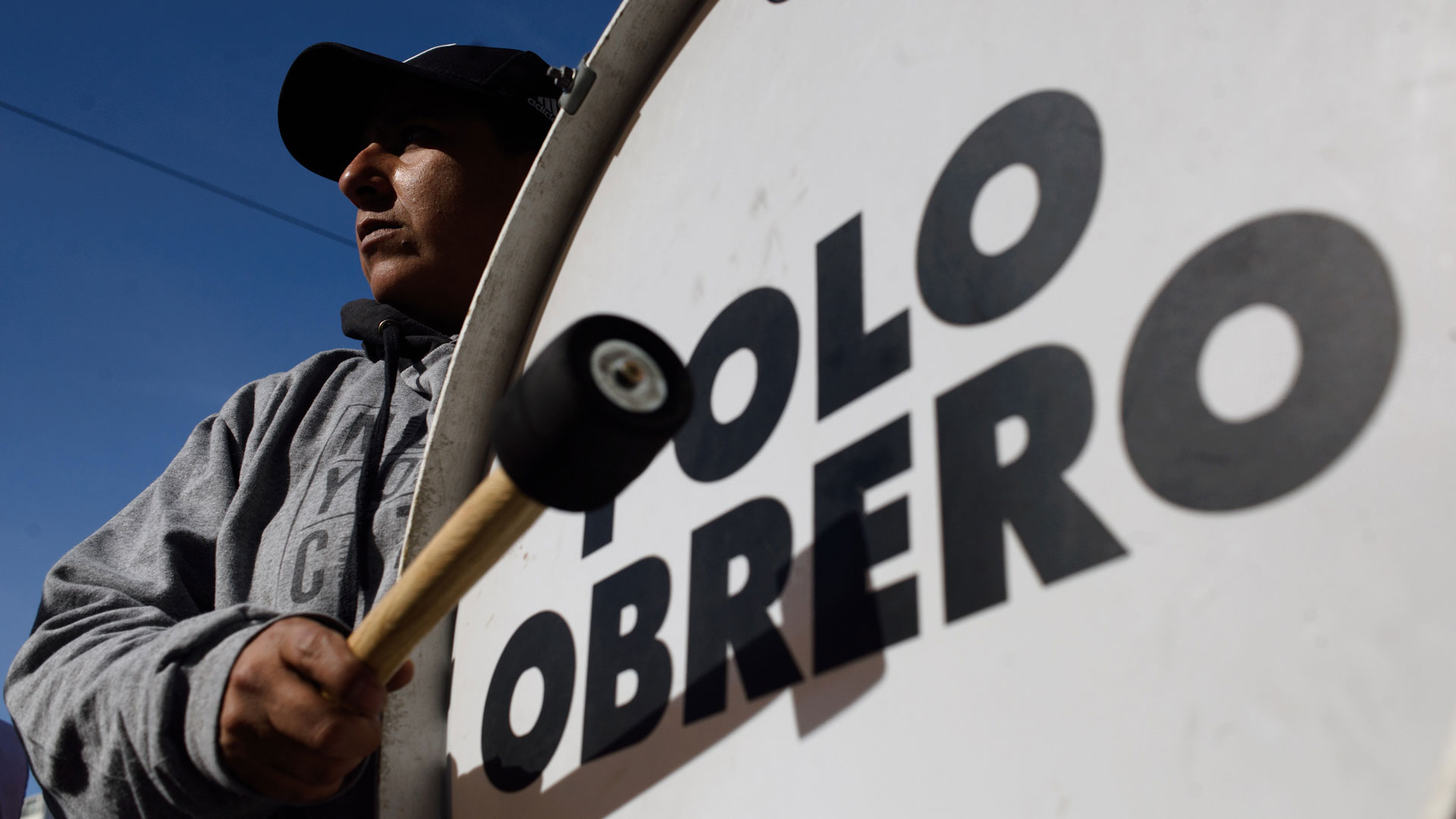 “We do not accept that the crisis be paid by the workers”, is one of the slogans of the march

In the run-up to the protest, Belliboni had indicated that the protest in Plaza de Mayo will consist of “a 24-hour rotation” among the protesters, so it will not be equivalent to a camping. “We are going to be in front of the Casa Rosada, a few meters from the Economy building until the new minister receives us. Like Silvina Batakis, we presented a request for an audience to Massa as soon as he took office. Since she didn’t answer us, we will remain in the town square”he claimed.

The City Government monitors and evaluates the measures it will take in the event of a possible interruption of the Metrobús, the cutting of arteries, diversion of at least 40 bus lines; traffic congestion and businesses that tend to lower their shutters.

The Piquetero Unit has planned a series of activities that aim to attract the attention and attendance of groups of young people, students and related unions. They announced the presence of “solidarity artists” such as the rock group Las Manos de Filippi, tenors from the Teatro Colón and a group of “surprise rappers.” 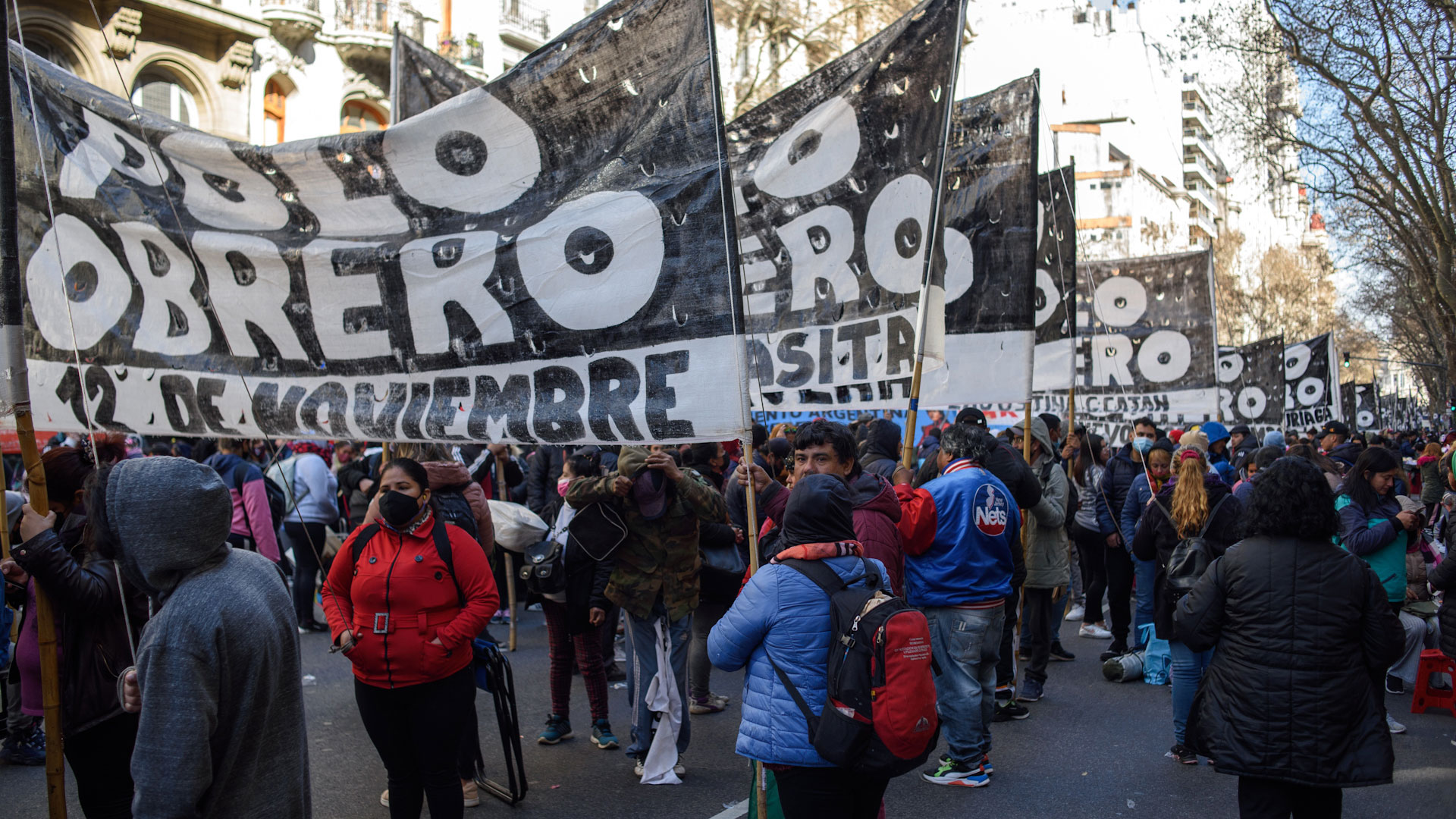 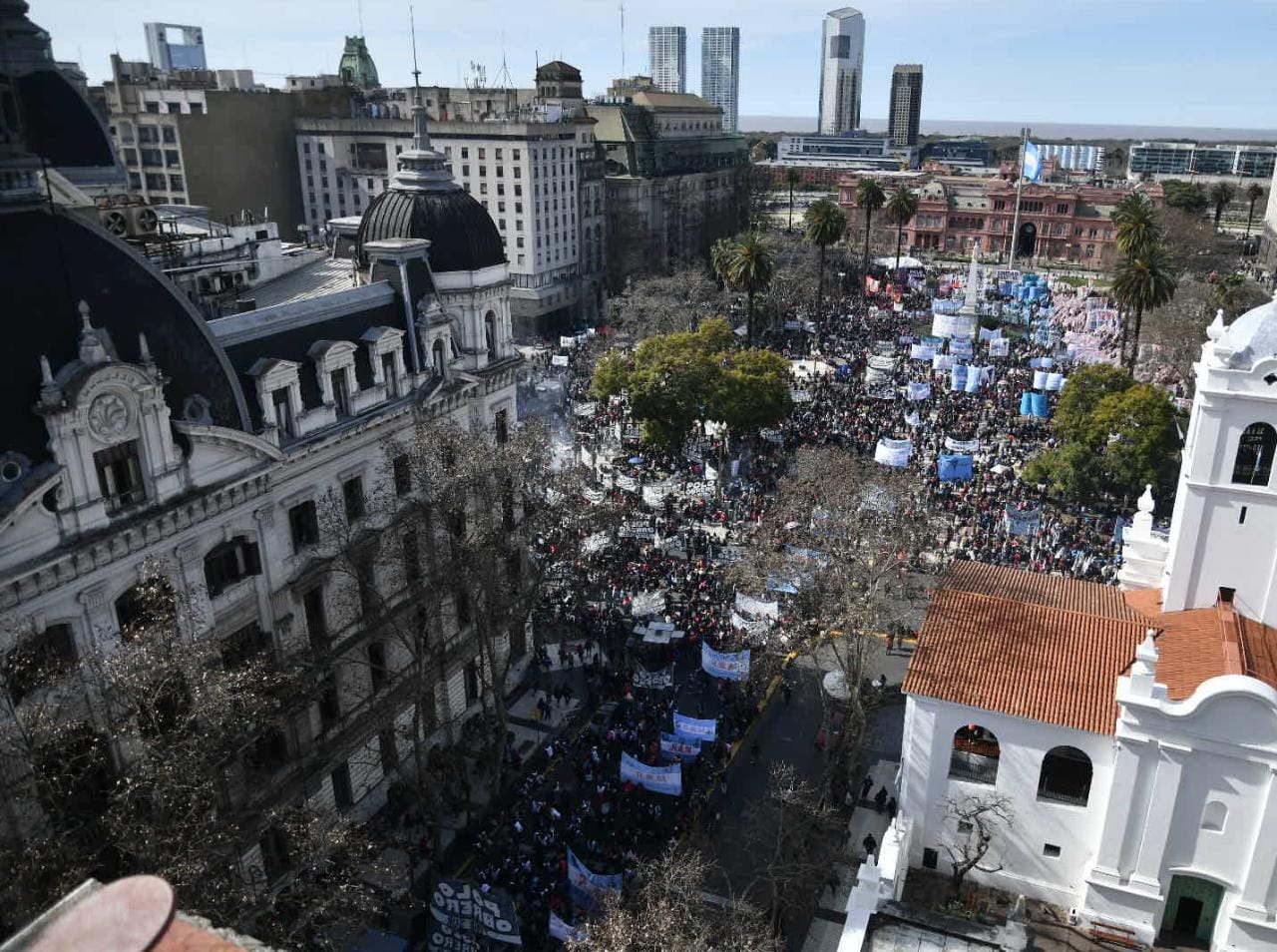 The protest from the air (Courtesy: Ojo Obrero Photography)

At 5:30 p.m., in Plaza de Mayo, a greeting is scheduled for the teaching leaders in the framework of the national strike; At 6:00 p.m., the act of the Piquetero Unit will take place. The day will close at 20 an artistic festival.

By that time, it will have been decided if the tents are set up to spend the night there, or if the permanence will continue on Thursday with the possibility of extending to Friday morning. 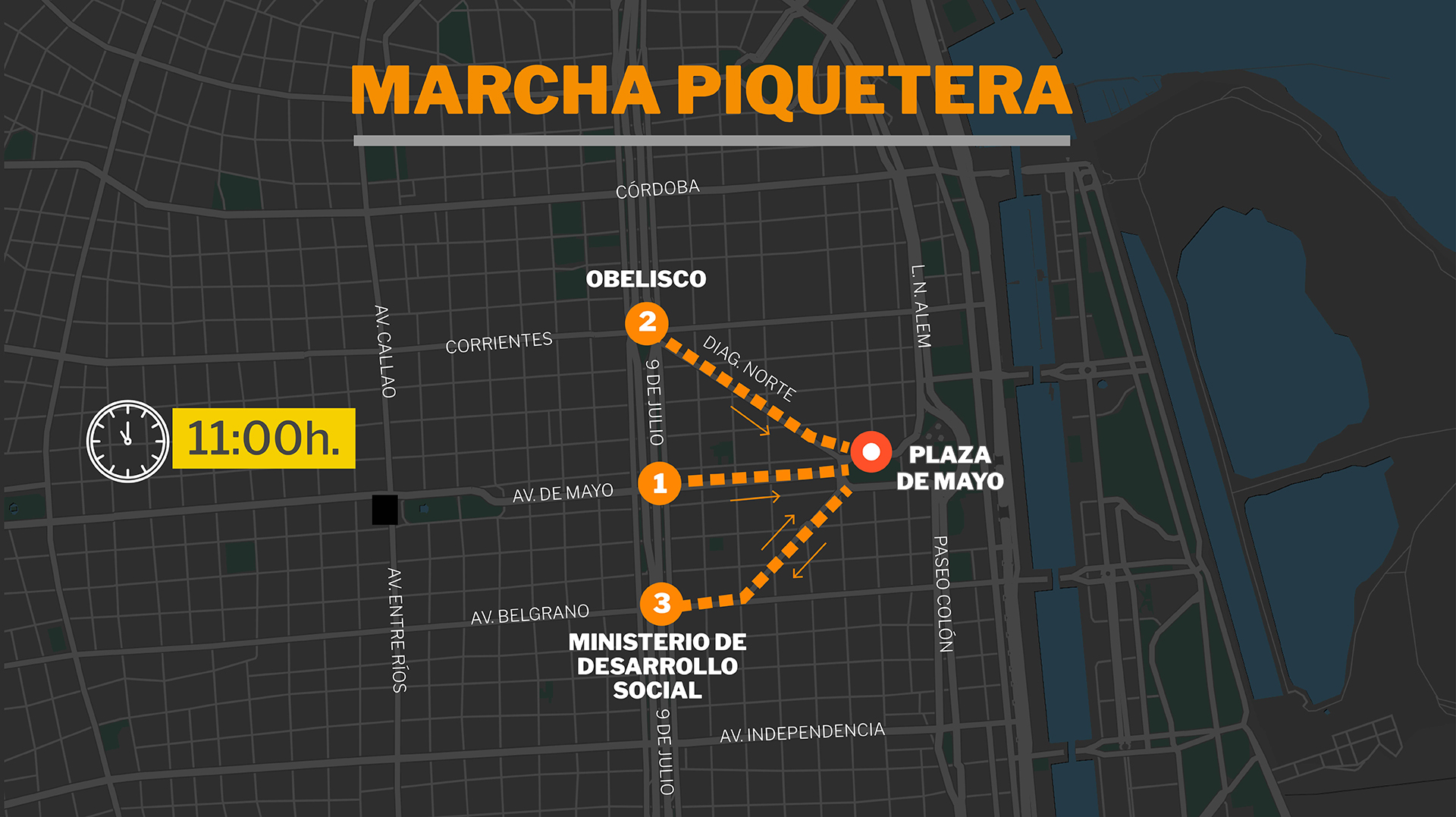 The schedule for the mobilization of the Piquetera Unit

The piqueteros will be installed in Plaza de Mayo as a sign of protest and will ask Sergio Massa to receive them
With 10 simultaneous marches, the picketers will demand from the Buenos Aires government a “universal subsidy for tenants”