Claudia López welcomed Gustavo Petro to the Presidency: “With great enthusiasm and emotion we begin a new story! 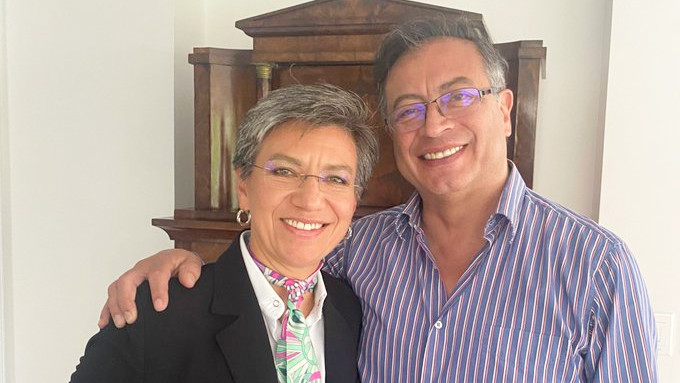 This August 7, Colombia takes a turn in its history by taking possession of the first president of leftist ideology. Gustavo Petro, and his vice-presidential formula, Francia Márquez, will take over the country starting today and they already have the mayors of the country’s main cities to make their political project a reality.

One of the first to welcome Petro and Márquez was Claudia López, mayor of Bogotá, the Colombian capital. The president celebrated the election of a “popular majority made by hand.” López even changed her profile picture on Twitter for the official logo of her possession act.

“With great enthusiasm and emotion we begin a new story! That of having for the first time in the Presidency a government part of and elected by the popular majorities and made by the hand of rural and urban Colombia. Welcome President Gustavo Petro and Vice President Francia Márquez! ”, López wrote on his Twitter account.

It should be noted that López must work with Petro so that important works can continue in the city, such as the Bogotá Metro.

In addition, they would be thinking of implementing throughout the country the so-called Apples of Care that López advances in several of the most vulnerable localities of the city. This program is part of the District Care System in Bogotá that seeks to help young people, women and other minority communities in the Bogotá territory.

YOU MAY BE INTERESTED: What Claudia López and Francia Márquez talked about during their meeting at the Liévano Palace

In addition to López, the mayor of Medellín, Daniel Quintero, also celebrated the official arrival of Petro and Márquez to power.

“Today truly begins a new era. We broke the curse of the past. The future is in our hands. The future looks like us”, assured Quintero.

It must be remembered that since the beginning of the campaign Quintero expressed his support for Petro. This action almost cost him his job, since the Attorney General’s Office removed him from the mayor’s office for having participated in the police, an action that public officials are prohibited from. Once the electoral campaign ended, the Medellín leader returned to office, however, an investigation against him is still ongoing.

On the other hand, the mayor of Cali, Jorge Iván Ospina, also spoke out to ensure that “After 200 years of republican history, we finally have a government of the people, with the people and for the people.”

“I am honored and on behalf of our people I will be at the inauguration ceremony of Mr. President Gustavo Petro and Mrs. Vice President Francia Márquez,” said Ospina.

Until noon this Sunday, of the four main cities in the country, the only president who has not sent his message to Petro is the mayor of Barranquilla, Jaime Pumarejo. The coastal leader limited himself to publishing a message commemorating the Battle of Boyacá in which Colombia obtained its independence from Spain in 1919.

“Every August 7 is the vindication of our brave and brave spirit, which has kept the flame of the Republic burning for 203 years. Today is the day to honor and continue fighting for those freedoms.” Pumarejo wrote.

It should be noted that although he has not published a message on networks, Pumarejo has already shown his interest in working with Petro. The mayor has a special request for the new national administration: the improvement of the energy service in the Caribbean region, in particular the rates, since they are very high.

This is how the prelude to the presidential inauguration of Gustavo Petro is lived in Bogotá
This is the official photo of Gustavo Petro as president, who will be in all government agencies and in the bases of the Armed Forces