La Merced, from the home of oligarchs to a neighborhood of universities 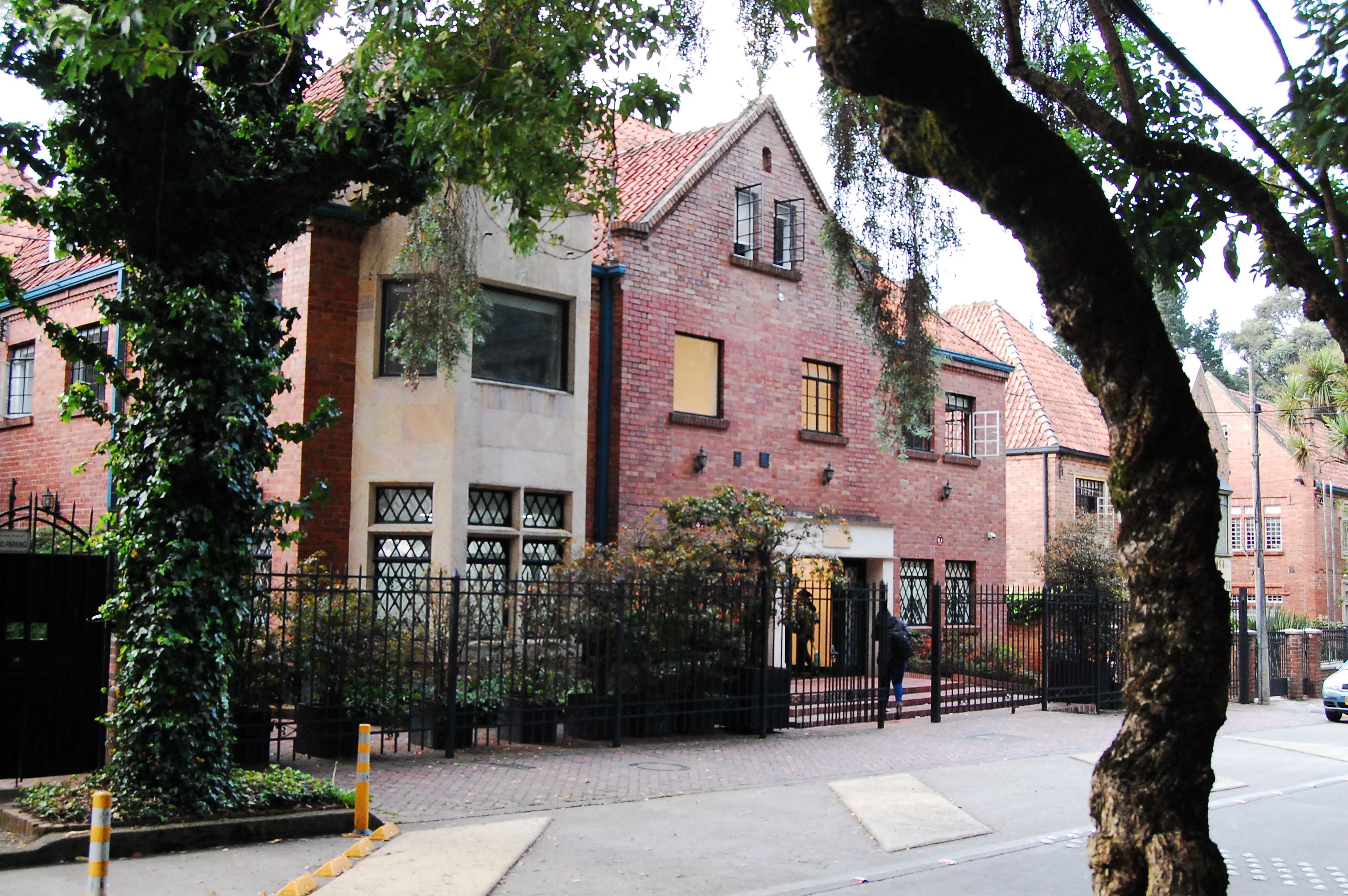 Luis wakes up every day at three in the morning. He takes a shower and some breakfast and goes out to find transportation. He has to get to work at six. Luis is a university warden. The university is in the La Merced neighborhood. This is the story of the two. Of Luis and the neighborhood he cares for.

Luis has been working at La Merced for eight years and arrived thanks to the company where he works. In these eight years the neighborhood has not changed, it seems immutable over time. But well, it has changed, the occupants of the houses change, which are mostly companies, the flowers also change, they bloom and wither and fall and bloom again. Students and passers-by in the neighborhood also change. Everything always changes. Even so, La Merced seems to be resisting and, like an ancient postcard of orange bricks and large front gardens, remains unchanged in the face of changes in the city.

At six in the morning everything is calmer and the light shines softly on the cornices of the houses of La Merced. At six in the morning, Luis has been in the neighborhood for a long time, he has already opened the gates and the offices, greeted his colleagues and is ready to start work.

The neighborhood was built between 1937 and 1945 on the grounds of a property from which it would take its name and which since 1908 belonged to the Jesuit community, which parceled out about six hectares – yards more, yards less – to obtain resources to build the new headquarters. of the Colegio San Bartolomé.

Before they belonged to the Jesuits, these lands originally belonged to the La Merced hacienda, which resulted from the division ordered in 1807 by Viceroy Antonio José Amar y Borbón of the great Chapinero hacienda that had belonged to Antón Hero, a shoemaker from Cadiz that after arriving, who knows when, because there are versions that he arrived with the expeditions of Jiménez de Quesada and others that he arrived later, he married the daughter of an indigenous person from Usaquén, who gave him a piece of land as a dowry about 150 hectares, in which Hero would set up his chapines factory and hence the name.

As a result of this division, the estates of Teusaquillo and La Magdalena were also born, which together with those of Chicó, Santa Ana, La Fragua, Llano de Mesa, Quiroga, Puente Aranda, La Chamicera, Techo, el Tintal, El Salitre made up the rural area, rest and recreation of Bogotá, but over the years they were dismembered and became neighborhoods, towns, libraries, stadiums.

Going back to the neighborhood and to the Jesuits and to 1908, it was on September 24 when Father Vicente Leza and Brother Arpidio Zuluaga bought the country house in La Merced from Don Arturo Malo O’leary, to give the students some relief on the days of vacation, as Father Leza would say, which because it was the day of Our Lady of Mercedes, he baptized La Merced.

But it would still take a few decades for the neighborhood to begin to be built, even to start thinking about subdividing the land. During those almost thirty years, between the purchase of the land and the construction of the first house in the neighborhood, that of the former mayor of Bogotá José María Piedrahíta –although there are those who say that the first house was that of the tobacco businessman Benjamín Moreno–, the The space that the neighborhood would occupy would be used for military parades, soccer championships and other leisure and recreation activities. 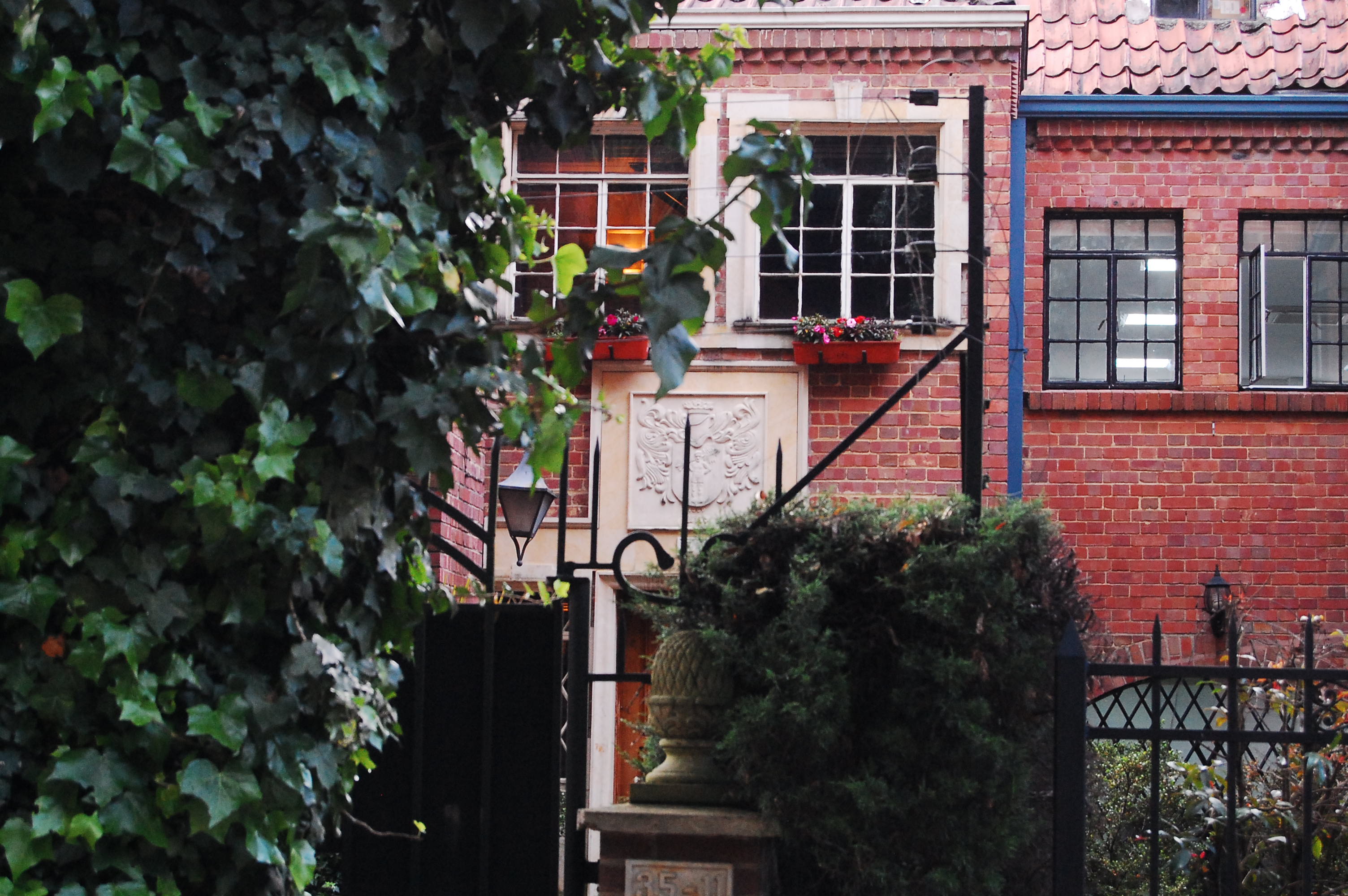 In the neighborhood they scare –that’s what Luis says they say–, for example there are people like the gym teacher who told me that they did scare him, even on the day he was sitting in the gym waiting for the students to arrive and they moved the garbage can, they opened the shower in the bathroom and when they went to see there was no one there.

In the house down here I heard a child crying. Once, Comrade Nelson, who was in the building that belonged to the Prosecutor’s Office, at one in the morning, sitting in the reception area and where the gym was, saw a girl with one of those plastic balls, and the ball was going down, going down and the ball went down the stairs and turned around and came to where he was.

At the Vargas house, a colleague who came to do a shift on a Friday said: I was sitting there and that pod that one senses that something is happening and that he looked up and to the part of the balcony, because he had his back and back there is a balcony and he turned to look and there was a man with a hat and a black overcoat standing there looking down. The man left from one in the morning until the partner arrived. I did a shift there once, it was with suggestion, maybe I look, maybe I don’t look, but I never got to feel anything.

Around March 1936, the Jesuit father Justiniano Vieira of the Colegio de San Bartolomé, according to what can be read in a document from the District Institute of Cultural Heritage, exchanged, in exchange for a couple of thousand shares, the La Merced development company, the lot, a little less than eight hectares next to the recently inaugurated National Park.

This transaction occurred in the face of rumors of expropriation of the original headquarters of the Colegio de San Bartolomé, which had been circulating since 1934 among certain circles of Bogota society. Rumors that were confirmed in 1937 when Law 10 was issued, which gave the Jesuits two years to hand over the school building –in one of the corners of Plaza de Bolívar, exactly east of the Capitol–.

And although the process of subdivision and subdivision of the property had begun a year earlier, with the order to hand over the original school building, the Jesuits proceeded to seek financing for the construction of the new headquarters, for which the urbanization process of the school began. neighborhood, which would culminate in 1945, four years after the inauguration of the current headquarters of Colegio San Bartolomé. 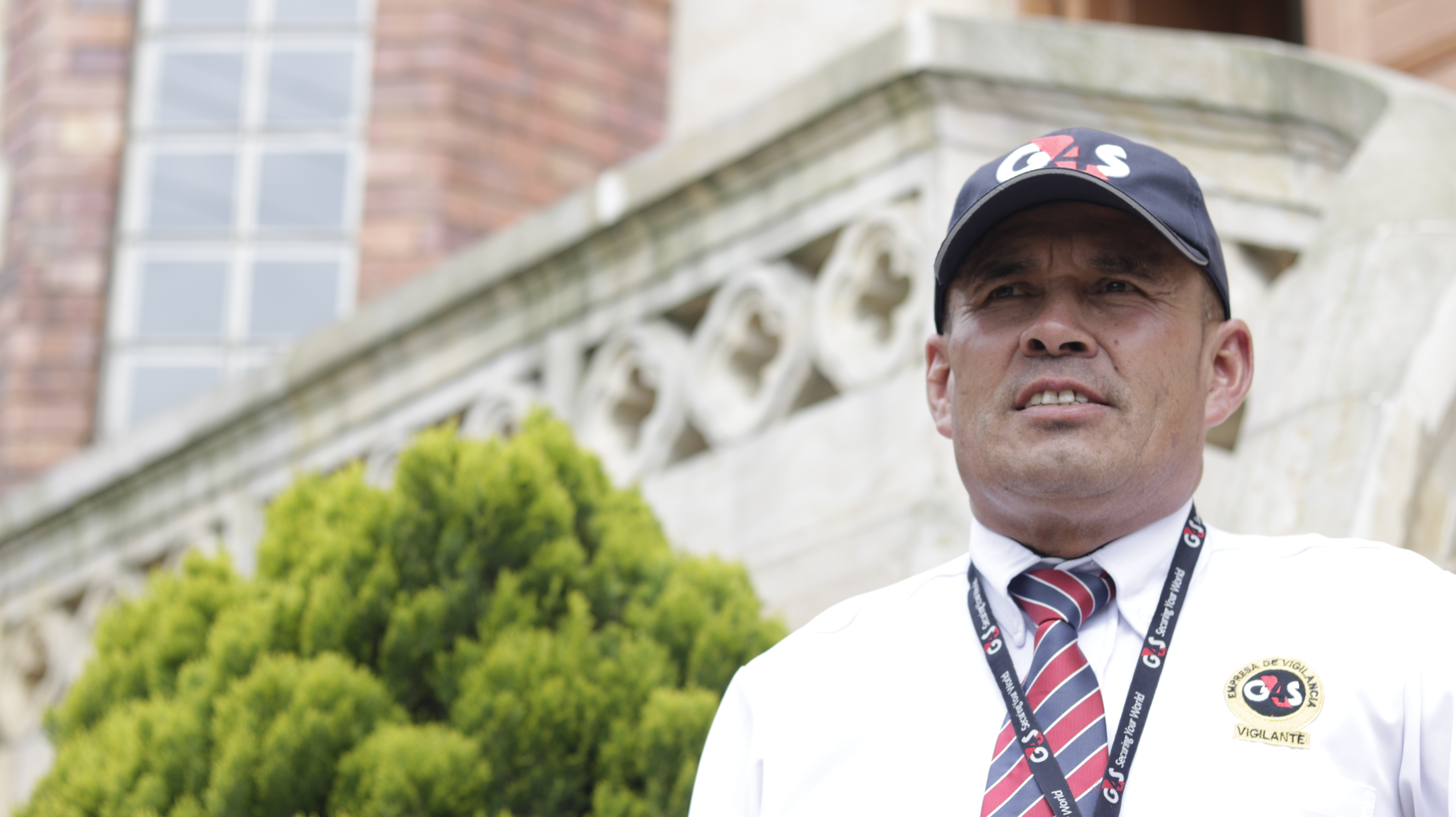 For Luis, work is not exhausting, but rather one often does it tiresomely and he says that when one stays in one place, or does not share with people, it becomes tiresome. “In my case, I am a person who is very open to people and I make myself here or there, always being attentive, which is the mission for which we are here, to be attentive to people and learn from people every day.”

In addition to being a caretaker and taking care of one of the many houses, Luis likes to paint on Sundays in a small room that he has in his house. There he has birds and a window through which he can see the Soacha savanna from above and says that he can see Mosquera. He is also interested in the work of Tamara de Lempicka and has made several copies and talks about the life of the Polish painter and with an echo of nostalgia he admits that because of the rush at work he doesn’t have much time to draw during the week . Also because he once tried it, he brought a canvas, and when he was just beginning to paint, people began to return to the neighborhood after the pandemic and the confinements. He lost concentration between correspondence and correspondence and lost students who could not find the house in which they had classes.

He says that a man with a little chair used to go to the neighborhood to paint watercolors of some houses, or the stairs that go up from La Merced to the Colegio San Bartolomé and the other neighborhoods of the Fifth Avenue, or through the Casa del Tolima with the Monsarrate hill. background, or painted some police horses in the National Park. He always showed Luis what he painted. Now he hasn’t come back, says Luis. The painter was a professor at the National University.

La Merced, since it was conceived as a neighborhood for people with high incomes who were looking for a modern and hygienic space in which to locate their residences and that responded to the new guidelines that the Hygiene Board, the Public Works Directorate and the Beautification and Municipality ornamentation had been arranged for the new constructions: paved streets, wide sidewalks and sewers and cement pipes.

Thus, the neighborhood had to be built in compliance with these urban conditions that sought to guarantee hygiene, which with its breadth were synonymous with modernity for the Bogota elite of the time. Thus, people such as the banker Luis Soto del Corral, the coffee grower Manuel Casabianca, the doctor José Vicente Huertas, the merchant Ernesto Puyana, the doctor Luis Bermúdez Ortega, the lawyer Ricardo Hinestrosa and the engineer Hernando Gómez Tanco, in addition to Piedrahíta and Moreno They had decided to build their residences there.

Regarding the architecture of La Merced, it must be said that it responds to a keen interest at the time in the Tudor style – an English style that emerged between the 16th and 17th centuries and flourished during the reign of Henry VIII – which by the end of the 19th century had already crossed borders and influenced constructions for wealthy families and luxurious institutional buildings in the United States, Argentina and Chile.

In Bogotá, the construction companies Noguera Santander and Pérez, Buitrago and Williamson adopted this style for the luxurious and grandiose houses that would be occupied by the “great heirs to the fortunes of the new Bogotá bourgeoisie” as Professor Murillo writes.

Taking once again the words of Murillo, who understands more about these things, he describes how “the houses of La Merced were designed to reproduce the spirit of the English: maintain the country and bucolic air that the open spaces and surrounded by nature give, but in a modern urban context; Hence, they were conceived as independent houses, without walls shared with their neighbors, and surrounded by front gardens that also separated them from the street and its passers-by”. 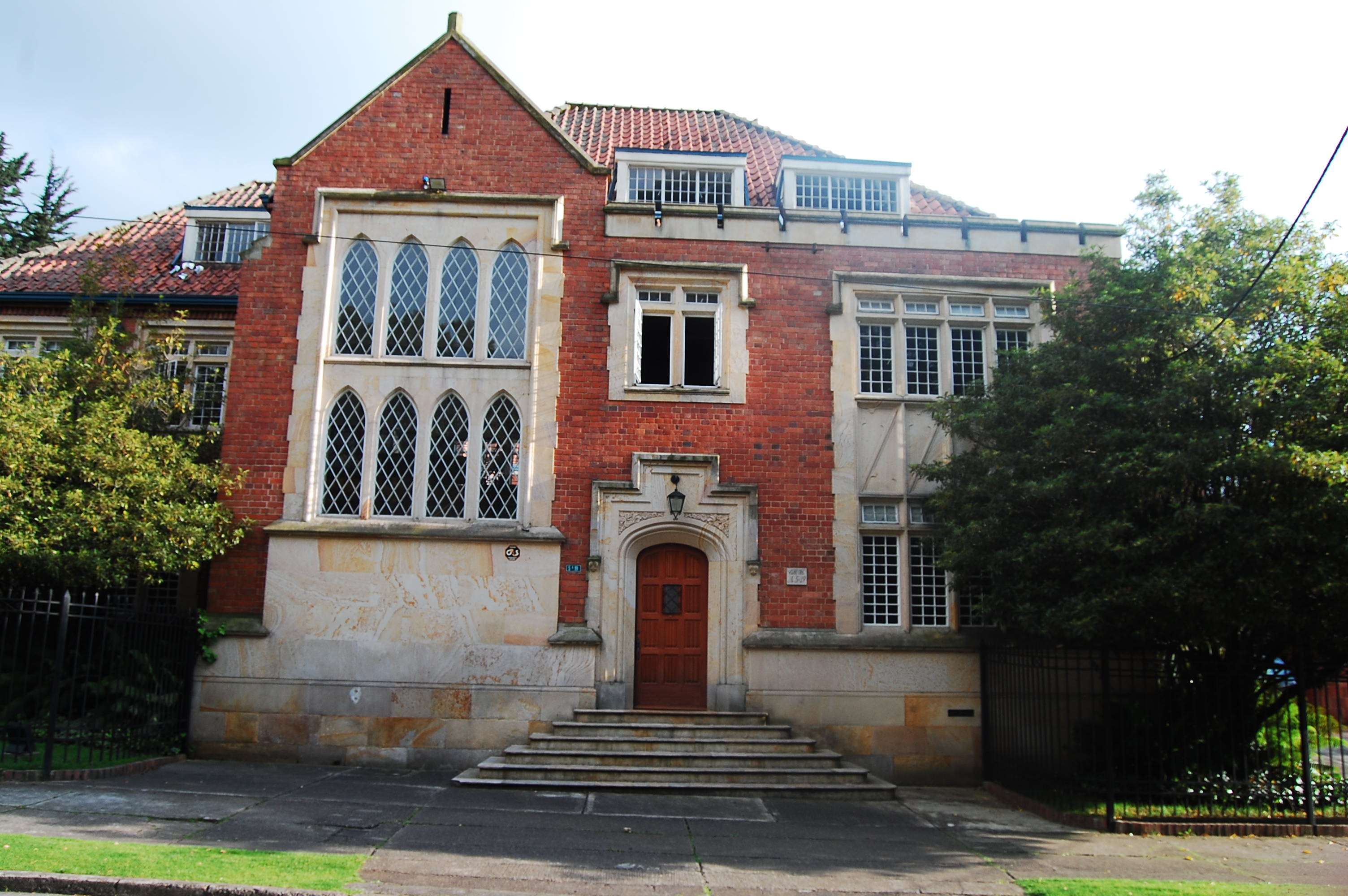 To return home Luis takes two and a half hours, “it’s complicated” he says. Luis leaves work at six in the afternoon, but he doesn’t run away, he goes slowly, he goes down to Caracas and sees how the TransMilenio is and from there he takes one that goes through the 30 and goes to Soacha. “I don’t stress,” he says. Luis says goodbye and goes down looking for the seventh, looking for lunch, it’s Monday and it’s sunny in Bogotá and the blue sky is bluer and the orange bricks of the houses, more orange.

In its 85 years, the neighborhood, in addition to having been home to some of the wealthiest families of the first half of the 20th century, was later occupied by universities and the houses of various departments, and even one of its houses served as the headquarters of the Prosecutor during its first years, between 1991 and 1998.

He also survived the Bogotazo. In 1948, the national government, given the lack of hotels to receive guests at the Pan-American Conference, leased several houses in La Merced to accommodate, among many others, General George Marshall, World War II hero and Secretary of State for the United States, who learned of Gaitán’s death there. It was also there that Laureano Gómez sheltered from the hordes of liberals eager for revolution.

Today, 85 years later, in La Merced it seems that there are only three families left living in the neighborhood and every day those days when their houses were the epicenter of good taste and modernity are further away. Today these houses have survived the changes of a city that wants to change every day and in which nothing remains standing, feeding a rare sense of nostalgia that, like the rain, always accompanies Bogotá.