Freddy Díaz: they dictate an impediment to leave the country against the congressman accused of sexual violation 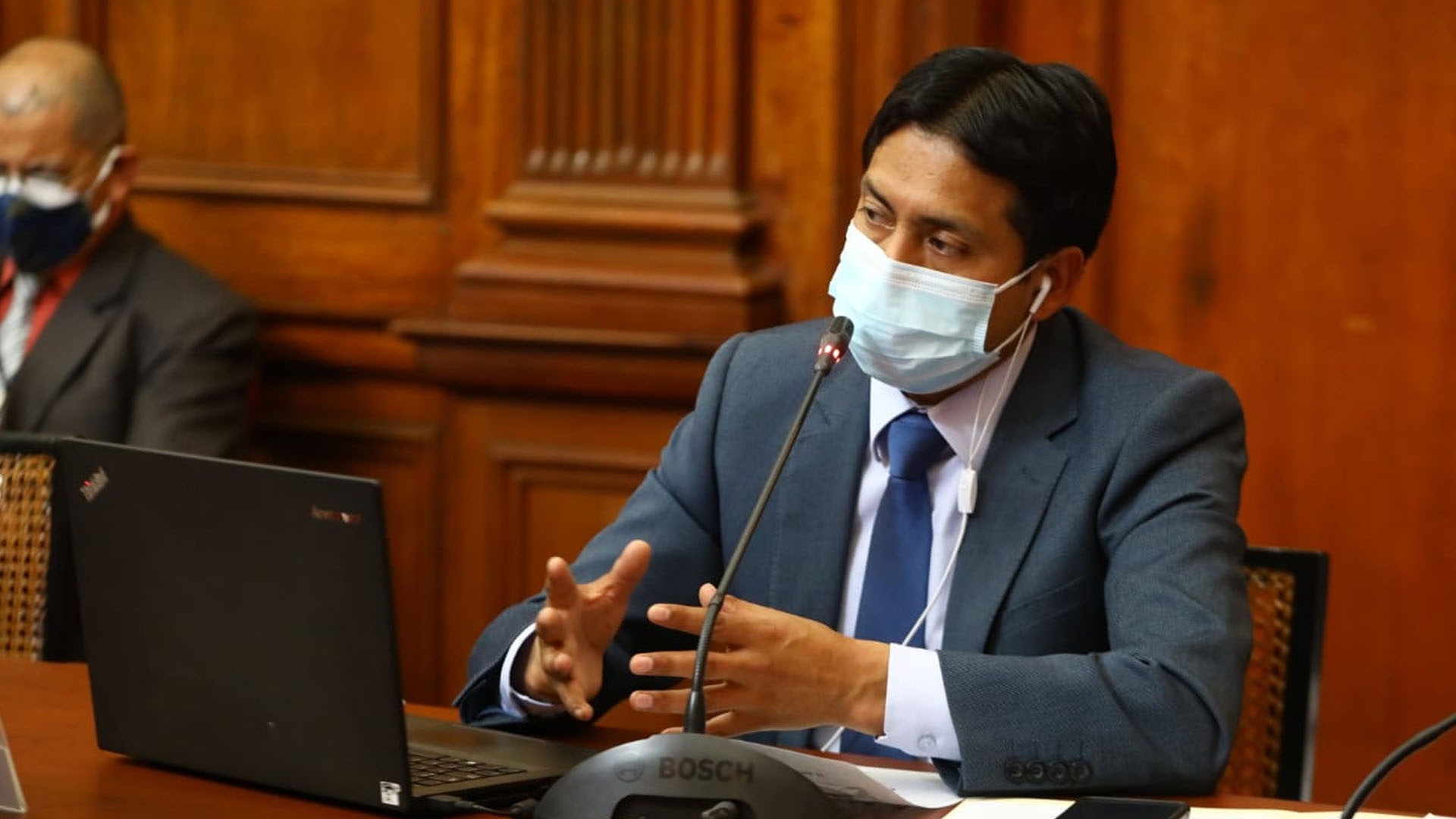 The Power of attorney announced this Friday that at the request of the Second Supreme Criminal Prosecutor’s Office, an exit impediment was issued, for 9 months, against the congressman Freddy Diaz Monago for the alleged crime of rape.

In addition, the preliminary arrest of the investigated was requested, which was declared unfounded by the Supreme Court of Preparatory Investigation.

The Supreme Court of Preparatory Investigation held a private hearing for the prosecution of the case in which the parliamentarian of Alianza para el Progreso is involved. 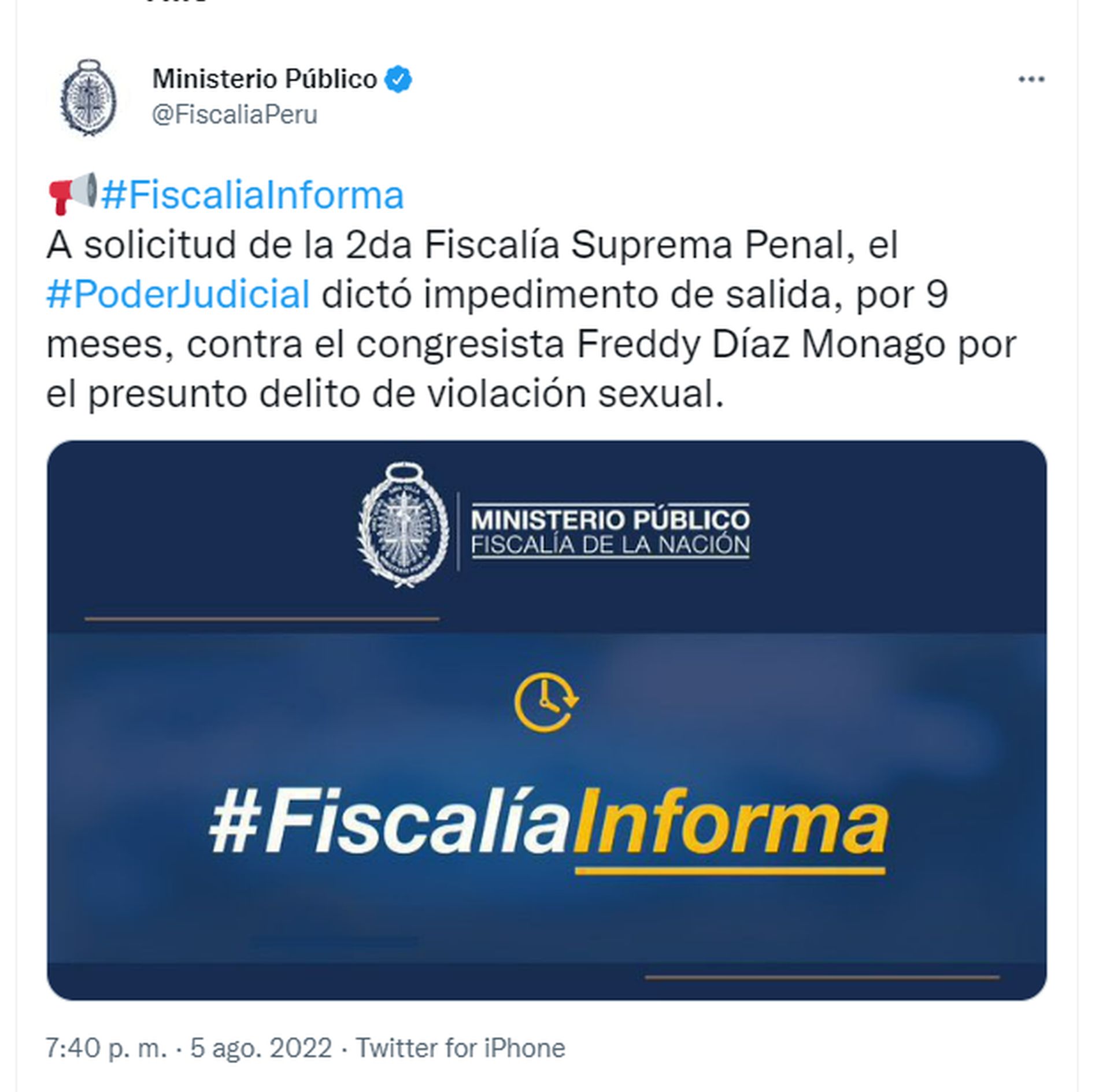 As recalled, the parliamentarian is accused of sexual assault against a Legislative worker, an act that would have been committed in the offices of this State Power.

Given these facts, last week the Public Ministry indicated that it will investigate the complaint of an alleged sexual violation, in which Congressman Díaz is involved. The case is in charge of the Special Prosecutor for Violence against Women.

The Alianza para el Progreso (APP) bench expelled Díaz from its ranks, stating that it condemns the execrable act attributed to the parliamentarian and requesting the rapid intervention of the Prosecutor’s Office and the Judiciary.

The legislator, through a statement, assured that he will submit to the investigations and indicated that he was the first interested in having the complaint clarified.

Freddy Díaz leaving his office after allegedly raping the worker in his office.

Video appears that would be added to the evidence. This audiovisual material recorded Congressman Freddy Díaz Monago when he left his office the night that the alleged violation of a worker of the Congress of the republic. This video has been posted by Panorama through its Twitter.

In the images recorded by a collaborator of the building it is evident that the Parliamentarian Freddy Diaz closes the door to his office and then goes downstairs, while this worker chases him to the outskirts of the facility letting him know that he had locked up his partner.

Testimony of the woman who accuses Congressman Freddy Díaz of rape. VIDEO: ATV

This week, The Juliana Oxenford Show revealed the tTestimony of the woman who denounced Congressman Freddy Díaz for doping and raping her sexually within the premises of Parliament.

The dramatic statements of the victim were direct in the accusation to the parliamentarian. “I am convinced that this subject has hurt me”said the young woman who preferred not to reveal her name for security reasons.

Also, in the report issued by Alstyle Juliana, the congressional worker indicated that Freddy Díaz did not receive flirting or consent from her at any timewhich is why she feels outraged that some people have spoken out on the subject pointing out that she is to blame for what happened.

“I am convinced that this subject (Freddy Díaz) has hurt me, that I have never consented to anything, nor have I flirted with him, nor have I given him any clues at all. I want to make it clear that what has happened is not my fault and that I have never consented to anything, so it is not fair and that it has appeared right now, I am afraid “he pointed out with a broken voice.

The Judiciary will evaluate this Friday the exit impediment against Freddy Díaz
Freddy Díaz: video appears from the night of the alleged rape where the congressman is seen leaving his office
Congressman Freddy Díaz, denounced for sexual violation, acquiesced to the impediment of leaving the country