Diego Bertie: tragic death of the actor and singer when he fell from the balcony of his apartment

Diego Bertie He died after falling from his apartment, located on the 14th floor of a building, located in the district of Miraflores, at approximately 4 am. Mario Casaretto, commander of the Fire Department, reported that the doorman of the condominium called the Emergency Department after hearing the impact.

Immediately, paramedics and firefighters approached the place to help the national artist. Diego Bertie He was found in his garage, with multiple fractures to his legs and back. He thus he was transferred to the José Casimiro Ulloa Emergency Hospital.

The Director of Communications of Hospital Casimiro Ulloa confirmed that Diego Bertie passed away at 4:28 am, at the age of 54.Soon, they will issue an official statement to clarify the details of his death, according to América TV.

Hours after the death was confirmed Diego Bertieofficers of the National Police arrived at the hospital to interview the doctors who treated him in order to start an investigation and find out details of the accident that cost the life of the national actor.

Likewise, personnel from the Depincri, the Miraflores police station and criminalistics experts arrived at the building where the fall of Diego Bertie and they are examining the place.

The Minister of Culture, Alejandro Salas, made available the facilities of the sector, located in the Museum of the Nation, to watch over the remains of the actor, singer and composer Diego Bertie. 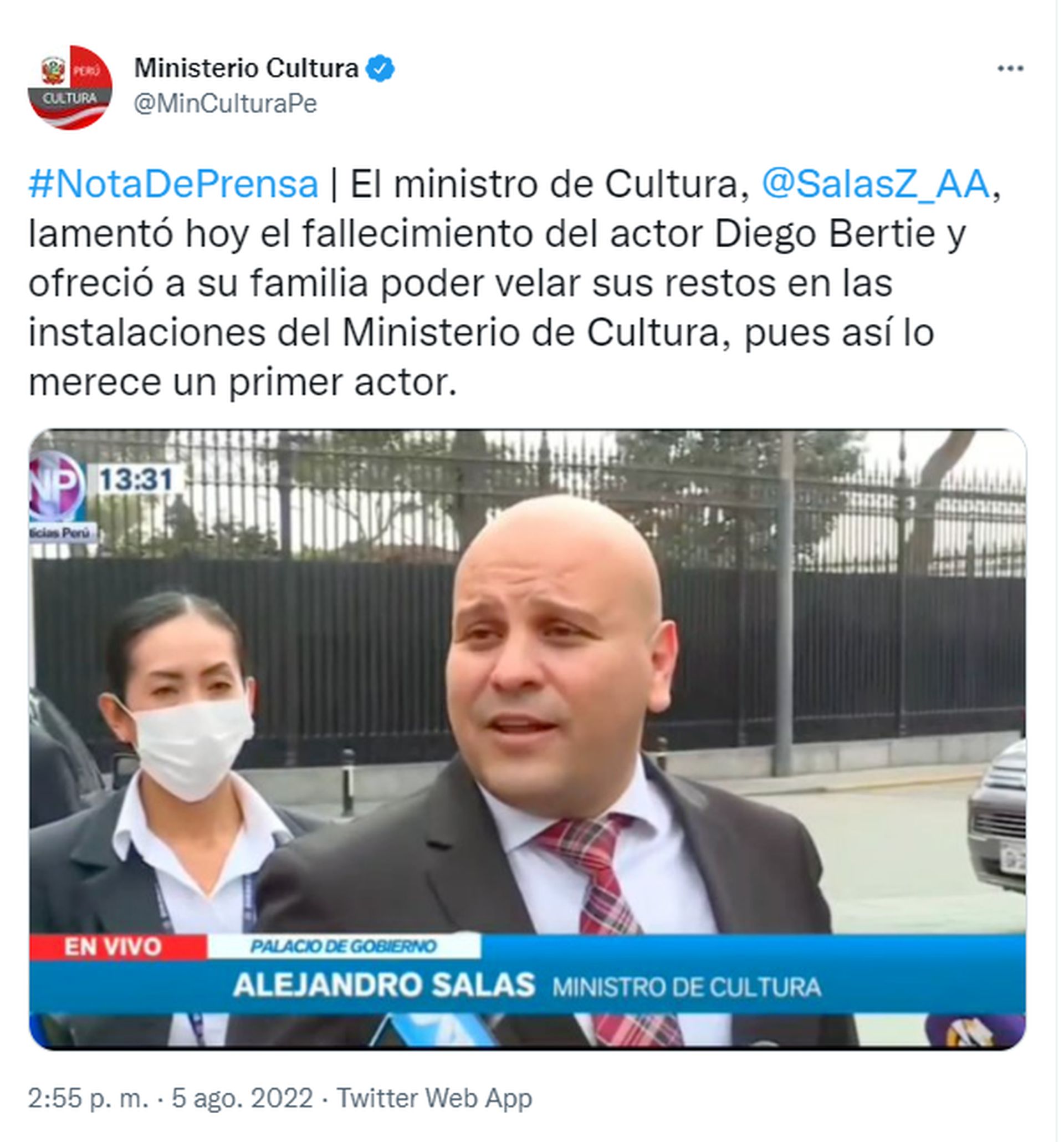 In one of the last interviews he gave to Infobae Peru, Diego Bertie he confessed that it was during the pandemic that music came back to him without him wanting it, but in moments of loneliness “music filled his soul”. “I didn’t choose music. Suddenly, Augusto Madueño called me, a friend, to be part of a rock tribute project, where they wanted me to do a new version of ‘What is difficult to love’.

“Singing is an action and it is a way of telling stories, expressing myself, sometimes in a series you are limited to one character. On the other hand, when you sing, you are the interpreter and you choose what to say, what to sing and tell. That is a very nice thing because you can give it an artistic form, through sound, video, arrangement, “he told Infobae.

He further emphasized that was recording an album that was going to be released in the next few months. “River three x’. This week I record vocals and I have five more songs to go. So how long it took me to mix, master and all of that will be seen on release,” he mentioned in May.

Likewise, Diego Bertie He maintained that among his action plans was the recording of a film alongside Katia Condos and another production that he left halfway through recording, since death surprised him by surprise.

“Yes, I’ve been offered to participate in a movie, I haven’t read the script yet, I confess, but it’s an interesting women’s movie and I’m there waiting. It will be shot between July and August. It is a Peruvian film.

Diego Bertie He not only marked the lives of millions of Peruvians with his performances and great presentations in the theater and on stage. He was always a colossal and professional artist who impressed everyone with every performance he performed, which is why the culture Ministry regretted the sad departure of the actor.

“We deeply regret the death of actor and singer Diego Bertie, recognized for his work in film, television and theater. From the Ministry of Culture we express our heartfelt condolences to his family and friends. 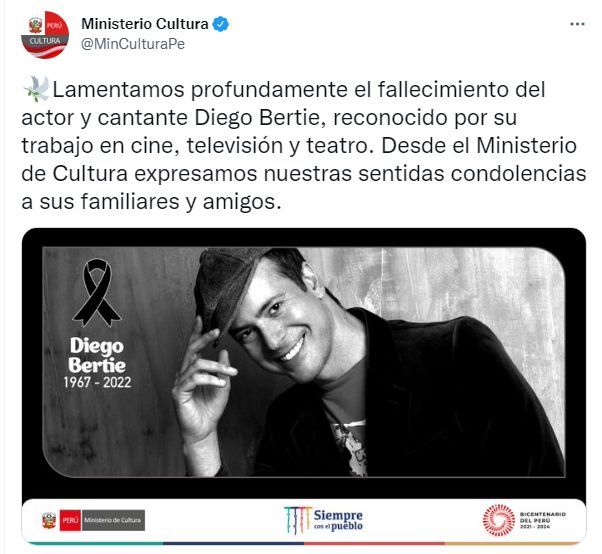 Ministry of Culture mourned the death of Diego Bertie

Carlos Sanchezofficial manager of Diego BertieHe was surprised by the news. In communication with ATV, he indicated that he is on his way to the Casimiro Ulloa Hospital and that he will soon meet with the relatives of the outstanding national artist, who have been in the health center since dawn.

“The director of the hospital has already confirmed his death. I am in total shock because Diego is a noble, cute, beautiful soul, an A1 artist. I have had to share a beautiful time with him, which is his return to music. I’m in shock, I don’t know what else to say. I want to talk to his family, no one answers the phone.”He commented quite affected.

Through a statement, the Casimiro Ulloa hospital confirmed the death of Diego Bertie as soon as he arrived at the hospital.

“Our hospital complies with informing that At 04:10 in the morning, Mr. Diego Bertie Brignardello was admitted, who was immediately treated by health professionals, confirming his death.”, says part of the document.

“The José Casimiro Ulloa Emergency Hospital regrets what happened and expresses its deepest condolences to the family and friends of the actor,” the statement concludes. 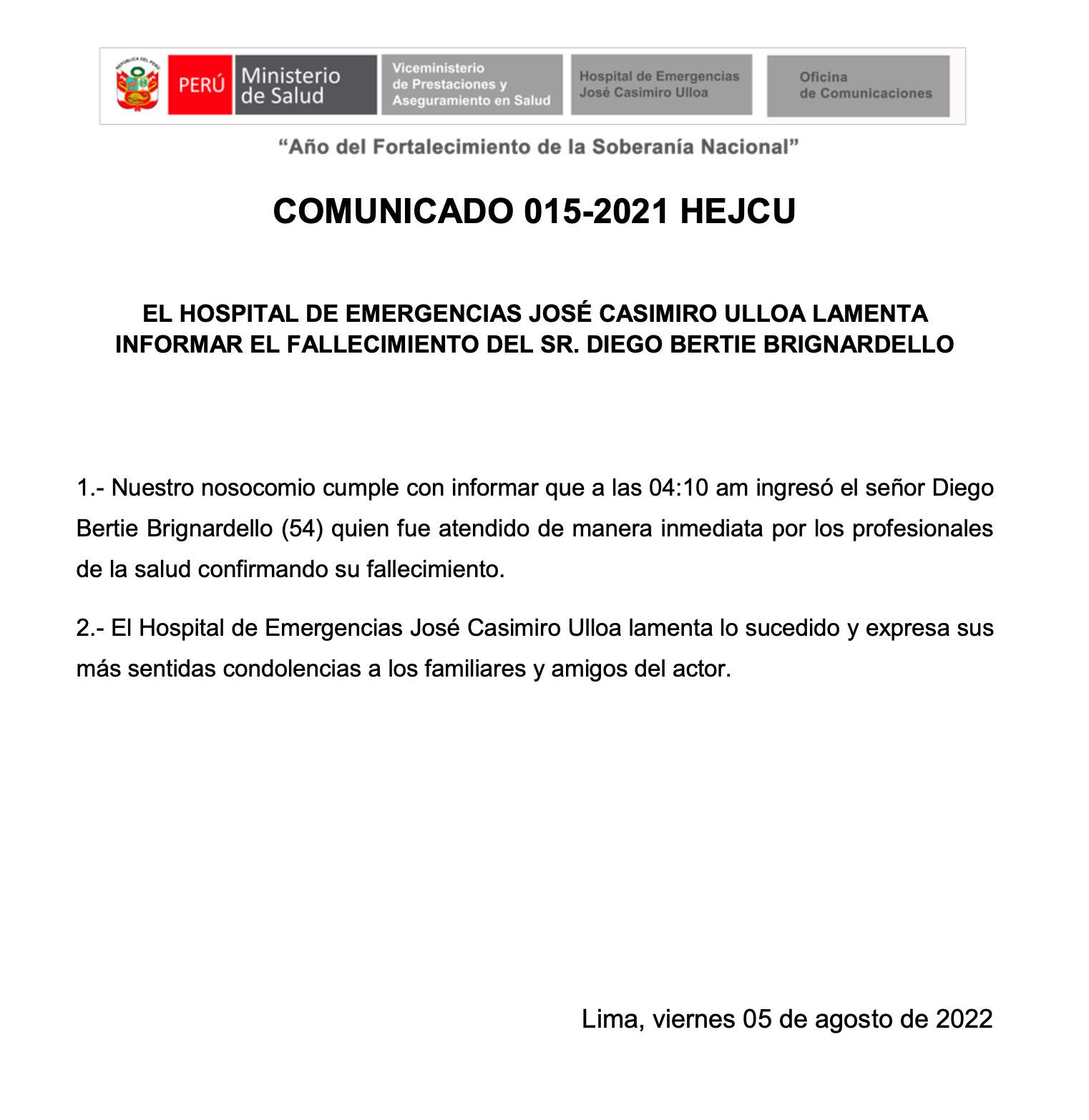 The diego bertie death It impacted the entire Peruvian show business, who dedicated emotional messages to him through their social networks and on national television.

Erika Villalobos He communicated with the journalist Fernando Díaz and with a broken voice he said he was very hurt by the disappearance of the actor, because he was his personal friend and with the person with whom he communicated the most in recent days and they were even in conversations to rehearse, because he had invited her to sing at one of his concerts.

Paul Martinactor with whom he shared roles in the remembered telenovela ‘Natacha’, along with Maricarmen Regueiro and Hilda Abrams, also said he was shocked and very dismayed by the diego bertie deathbecause he considered that he was a young person and that in the last five years they shared roles in the series ‘Back to the neighborhood’, where he verified that he was a good person, with a big heart and very professional.

A few weeks ago, Diego Bertie was interviewed by Magaly Medina and, in addition to announcing his return to music, confirmed his homosexuality and all the mystery that enclosed his personal life. At that time, the actor said that now “I am a free, happy person and without any roll” and that his daughter knows that she is gay since she was 6 years old.

He also spoke of the controversial relationship with the presenter Jaime Baylyof whom he assured does not keep the best memories. “Yes, I was a friend of Jaime (Bayly). We had a short relationship, it was not a relevant failed relationship, what was relevant was what he did with me, he wrote books, he exposed my privacy, he exposed things that I had the right to expose when I wanted and at the time I wanted, he exposed me and he violated my family, my daughter, my life, my career and he did me a lot of damage”, indicated the film, theater and television actor.

The story of Diego Bertie and Jaime Bayly: A hidden romance that was confirmed after 28 years
Diego Bertie confesses to Ethel Pozo that he almost had an affair with Gisela Valcárcel: “I could be your stepfather”
Diego Bertie and Mariella Zanetti share a passionate kiss on the JB program on ATV