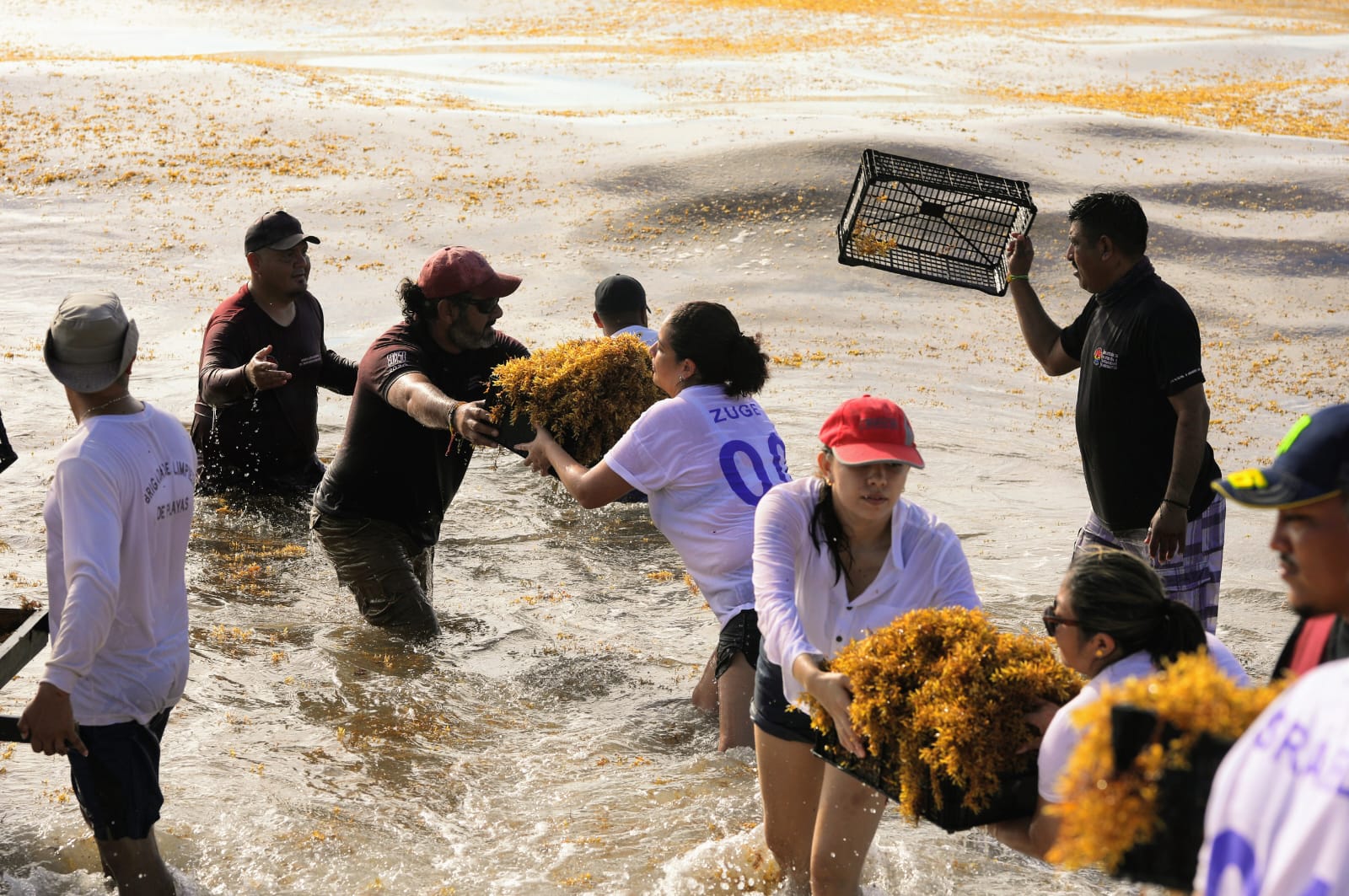 A total of 6,106.59 tons of sargassum were removed from the 7 beaches that have public access. (Photo: Benito Juárez City Hall, Quintana Roo)

To remove the outbreak of sargassum on the beaches of the Mexican Caribbean, this August 6 was held at Playa Delfines, the conference “Everyone against sargassum”a collaboration between public servants and participants from municipal agencies to immediately attend to this natural phenomenon.

Tania Fernández Moreno, the head of Beach Maintenance and Certification of the Federal Maritime-Terrestrial Zone (Zofemat), pointed out that until last August 4, through Zofemat and the General Directorate of Public Services, Eight thousand 723.70 cubic meters of this macroalgae were removed, that is, a total of six thousand 106.59 tons of sargassum of the 7 beaches that have public access.

Among the municipal agencies that participated in the removal of sargassum, is the Secretariat of Public Safety and Traffic, municipal DIF, the Heroic Fire Department and the directorates of Civil Protection, Civic Court, Ecology, Public Relations, International Affairs and General Services to mention just a few.

The cleaning work had to be intensified, due to the arrival of national and foreign tourists, since it is a very strong season for the economy that depends on the tourism sector. Likewise, daily cleaning is being carried out to avoid accumulation of residues.

The months without sargassum in the Caribbean

According to information provided by the National Autonomous University of Mexico (UNAM)mainly during the winter monthsJanuary, February and March practically there is no sargassum on the Mexican Caribbean coast.

Precisely when spring arrives, it is when the macroalgae begin to multiply and gradually arrive at the paradisiacal beaches. In the summer is when they reach their highest peak and as soon as autumn enters, they decline again, if the amount of sargassum is very large and it is not collected on time (one to two days after its arrival on a beach), begins to break down and generate toxic gases, such as hydrogen sulfide gas and methane, and leachate containing metals, among which arsenic stands out for its dangerousness (It has been found in high concentrations in many places in the Caribbean where it ends up). 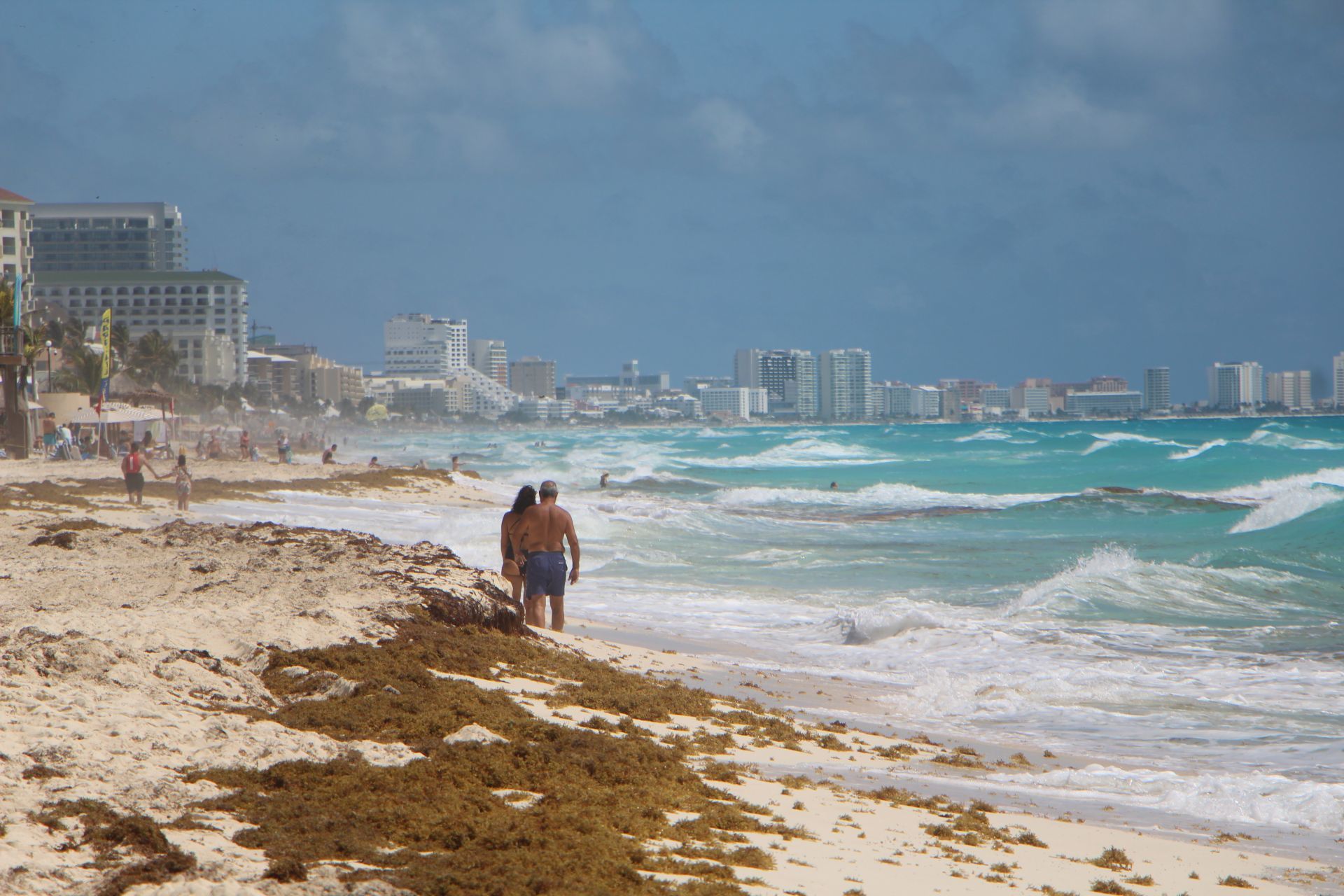 CANCUN, QUINTANA ROO, APRIL 04, 2022.- According to the traffic light, there are 44 beaches in the north with excessive sargassum runoff, zero more with abundant runoff, 13 beaches with moderate runoff, 19 very low and 04 beaches without sargassum. In the magen Playa Ballenas and Playa Gaviota Azul. PHOTO: ELIZABETH RUIZ/CUARTOSCURO.COM

According to federal government figures, the arrival of about 32 thousand tons of sargassum in the country is expected for this 2022which for the authorities is an alarming figure, this according to the statements of Admiral Rafel Ojeda,

According to research from the National Autonomous University of Mexicothe sargassum began to arrive on the coast of Quintana Roo since the end of 2014, intensifying in 2015; in 2018 the volume was exaggerated, its arrival continued until September 2019, and then it declined.

The Navy has 11 algae collection vessels operating in the area, but the department’s own figures show that the amount collected from the sea drops each year. In 2020, the Navy removed 4% of the sargassum in the sea, while 96% was removed from the beaches. the figure dropped to 3% last year and to about 1% so far in 2022.

Marina acknowledged that the arrival of sargassum in 2022 has been higher than other years: “It has surpassed us”
IPN: scientists study antimicrobial activity from sargassum
Tiktoker captured alleged shooting while people danced in a Cancun club