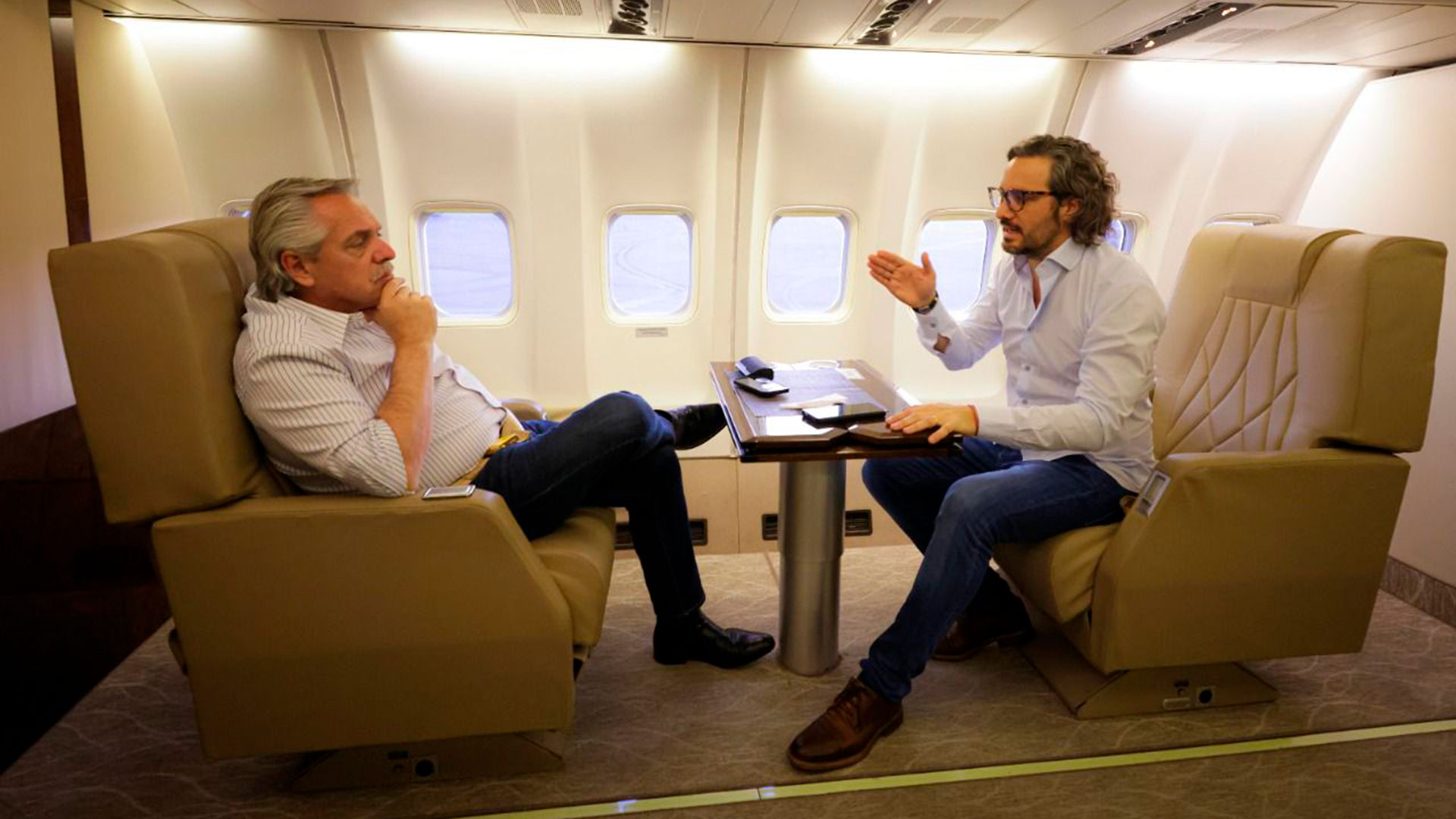 Alberto Fernández and Santiago Cafiero on a trip to Colombia

He went through one of the most complicated periods since he arrived at the Casa Rosada in December 2019. And after the hectic last weeks that he had to overcome and that ended with the decision to restructure his cabinet with the arrival of Serge Massa to the Ministry of Economy, President Alberto Fernández will return to his international agenda. This Friday, after 7:00 p.m. with a small entourage made up only of Foreign Minister Santiago Cafiero, He left for Bogotá, Colombia, where on Sunday he will attend the inauguration as the new president of that country, Gustavo Petro.

The Argentine head of state considers Petro as another of his regional allies. He reflected it in the first tweets he dedicated to him as soon as the victory in the Colombian elections was confirmed on June 19. There he greeted the president-elect expressing that he will help “validate democracy and ensure the path towards an integrated Latin America, in this time that requires the maximum solidarity between brother peoples”. Petro will head the Casa de Nariño (headquarters of the Colombian government) until 2026, replacing the outgoing Iván Duque.

Fernández has held the pro tempore ownership of CELAC since the beginning of this 2022. with Petro will seek to strengthen the group of presidents of the Latin American left who have been joining the continent after the elections in Argentina, as happened before with Luis Arce in Bolivia and later with Gabriel Boric in Chile. In the Argentine Government they hope that this trend will be completed with the return of Lula da Silva to power in Brazil, after the elections that will be held on October 2 and in which he will face Jair Bolsonaro. 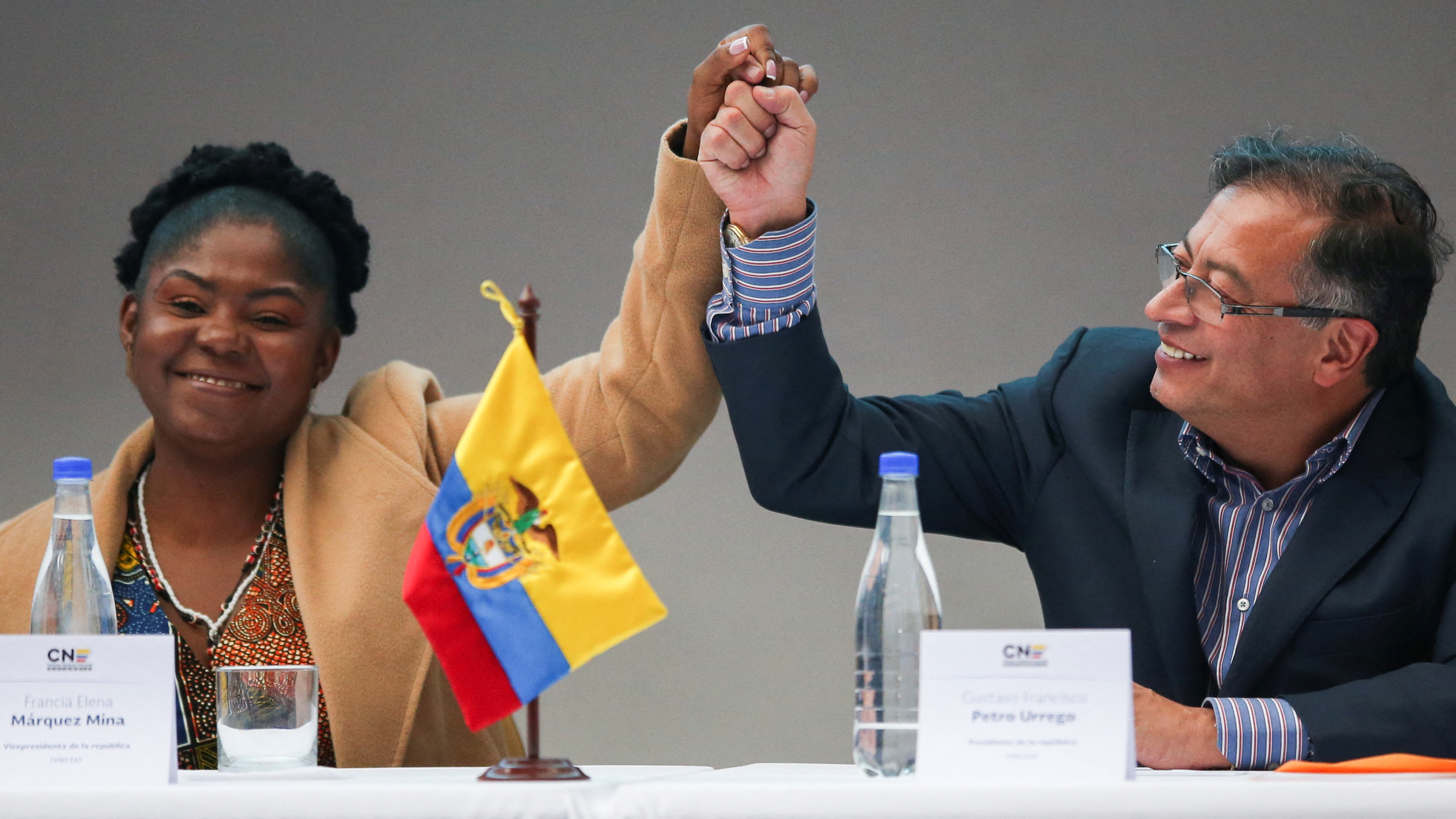 Gustavo Petro and Francia Márquez celebrate after being elected to lead the destinies of Colombia until 2026. /REUTERS/Luisa Gonzalez

That is why already during Petro’s campaign for the presidency in which the Historical Pact front that grouped the expressions of the Colombian left won with 50.12% of the votes the millionaire right-wing candidate Rodolfo Hernandez had declared in his favour.

The support from Balcarce 50 for the next government headed by Petro starting next Sunday was also reflected in the separate meetings that Alberto Fernández and Vice President Cristina Fernández de Kirchner held on July 29 with Francia Márquez Mina, who is the first Afro-Colombian and the second woman to be vice president of her country during her visit to Buenos Aires that also included other neighboring countries.

Fernández received the elected vice president of Colombia in her presidential office at the Casa Rosada, accompanied by several of the female officials who make up the Argentine government. And as officially reported “They discussed the challenges of the region in environmental matters and the rights of people of African descent.” 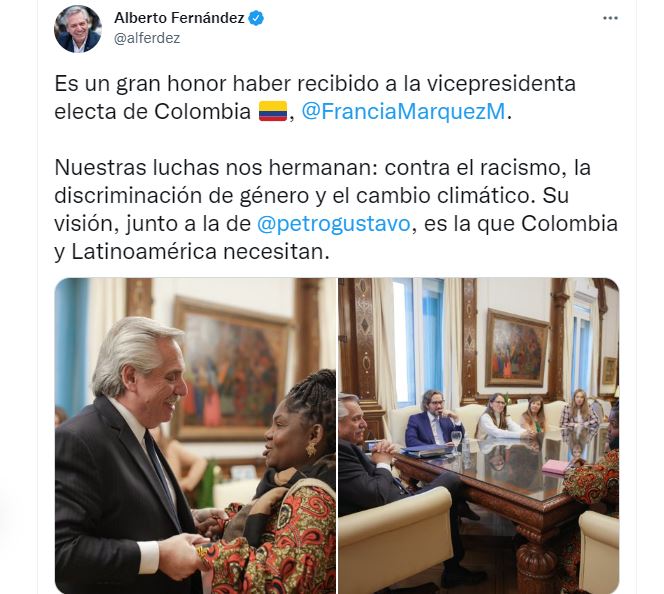 Alberto Fernández when he received the elected vice president of Colombia

The Argentine president and Márquez also analyzed the international situation and the common work agenda between Argentina and Colombia. Márquez, graduated as a lawyer in Cali, is the founder of the “I am because we are” movement and had an important role as a defender of the environment and also represented the victims of the armed conflict in the framework of the Peace Process in Colombia, which served her well. to obtain various national and international awards.

That recent visit by Vice President-elect Francia Márquez to La Rosada served as another bridge to Petro. “Our struggles bring us together: against racism, gender discrimination and climate change. His vision, together with that of @petrogustavo, is what Colombia and Latin America need,” the President wrote on his Twitter account.

Fernández will maintain, in principle, three bilateral meetings in Bogotá. This Saturday afternoon, he will meet with his counterpart from Honduras, Xiomara Castro, a leader very close to Vice President Cristina Fernández de Kirchner. For Sunday morning, he has planned a meeting alone with Petro before the inauguration ceremony that will take place in the afternoon between 3 and 5 p.m. in Colombia (there is a difference of two hours less with the Argentine time zone). Without a defined schedule, there will still be a bilateral with its Bolivian pair louis arce. 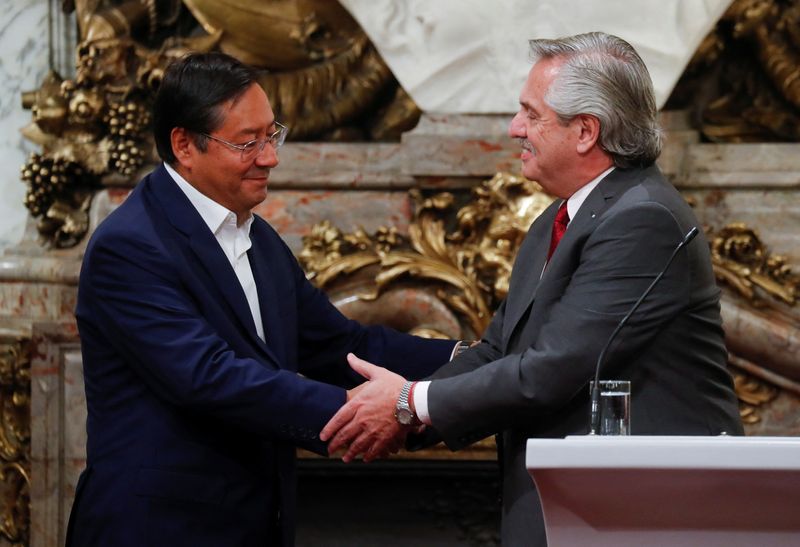 One of the bilaterals that Alberto Fernández will have will be with his Bolivian pair Luis Arce. REUTERS/Agustin Marcarian

Also present at the ceremony will be King Felipe VI of Spain; the presidents of Chile, Gabriel Boric; from Ecuador, Guillermo Lasso; from the Dominican Republic, Luis Abinader, and from Panama, Laurentino Cortizo, among other representatives. Petro decided not to extend an invitation to Nicolás Maduro. Neither will the Peruvian president, Pedro Castillo, because the Congress of his country did not authorize him to participate.

Fernández seeks to recover a greater role in foreign policy with this trip. At the head of CELAC, he will have to fulfill a complicated role of balance that moderates his relationship with the United States and with the countries that the government of Joe Biden considers anti-democratic as those of Nicaragua, Cuba and Venezuela.

At the end of this month, his meeting with the Democratic leader in Washington is likely to finally take place. The visit was scheduled for Tuesday, July 26, but had to be postponed because Biden was affected by Covid, on two occasions.