The federal highway Mexico-Toluca suffered a strong road accident that led to a trailer, which lost control at the height of Beautiful View Hills and it took at least three cars, one of which was heavily damaged and injured people.

The event occurred around 7:00 p.m. this Thursday, August 2for which images immediately began to circulate on social networks of the damage left by the trailer in both directions, since three cars with damage and the transport vehicle were observed completely preventing the passage towards Toluca.

Due to the recovery maneuvers of the trailer, as well as the pertinent medical attention, the passage was completely closed and it was recommended to use alternate routes as Santa Fe or the toll highway. 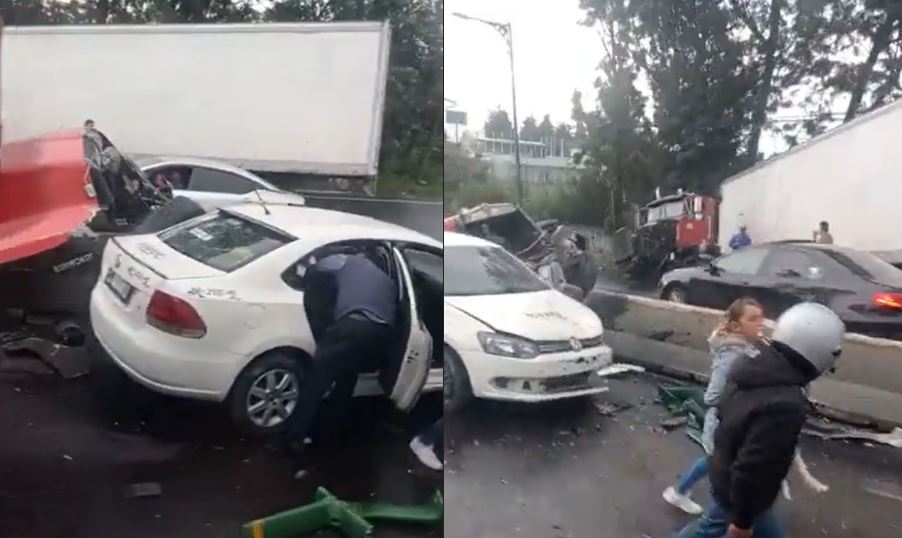 According to Road Guidance Center of the Secretariat of Citizen Security, emergency teams arrived at the site shortly to attend to those affected, as well as to organize rescue movements and confirm that there are no serious injuries.

So far no serious injuries have been reported and much less people died from the accident, which required medical attention provided by elements of the Rescue Squad and Medical Emergencies (ERUM).

“Emergency teams are working due to a mishap on the Mexico-Toluca federal highway at the height of Lomas de Vista Hermosa, #AlternativaVial Mexico-Toluca highway” 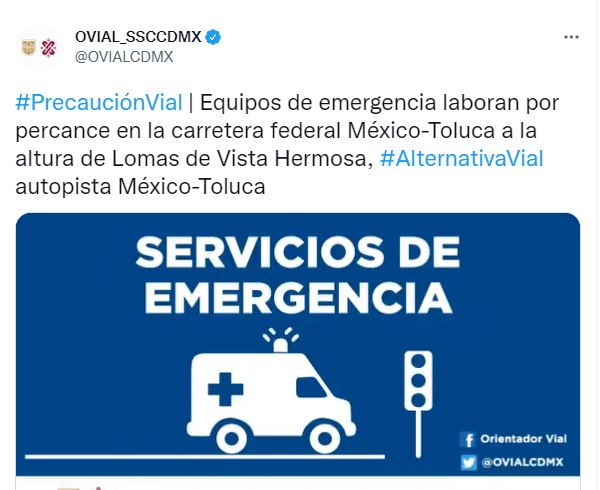 Once the cars involved were sidelined, traffic was resumed with caution along a single lane to lighten the accumulated traffic a bit, while the cranes needed to lift the damage left by the trailer arrived in the area.

It should be noted that the transport vehicle is stuck in the pastures on the side of the road, so specialized units are needed to get it out of there and solve the road problem. 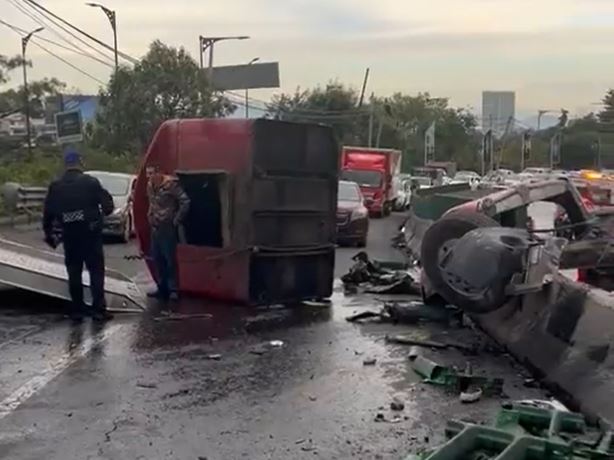 Fragment of the trailer that remained on the other side after the accident that occurred on the Mexico-Toluca highway, near Lomas de Vista Hermosa (Photo: Twitter/@)

Just last July 25, another trailer crashed against a self-service store under a pedestrian bridge in the municipality of San Francisco Chimalpaon Naucalpan-Toluca highway and as balance four people deceased and road chaos for more than five hours.

According to the first reports, the driver of the unit lost control of the vehicle and it was stamped with a series of semi-fixed food stalls, made of sheet metal, materials that did not withstand the impact of the unit. Due to the fact that several people were in the place, neighbors came to help those who were injured by the impact, in addition to joining to empty the cargo of the trailer with the aim of moving the cabin and removing the victims.

According to unofficial information, the victims were two adult women and two adult men, one between 50 and 55 years old and another just over 35 years old. The truck operator was identified as Raúl “N”, 45 years oldwho was transferred to Public ministry.