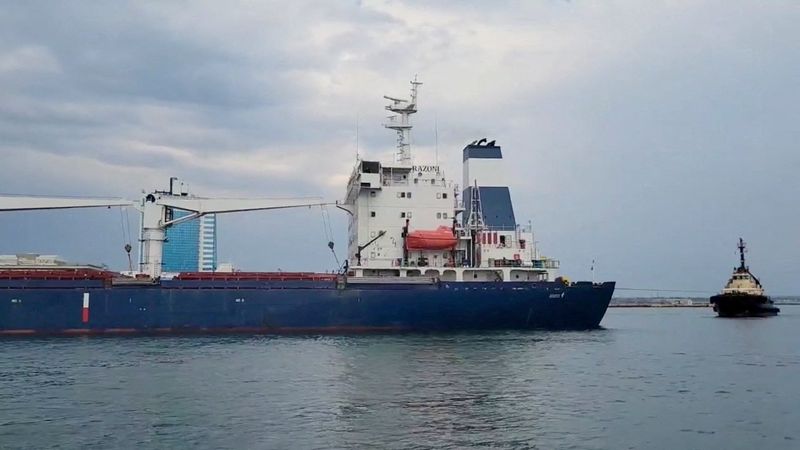 By Orhan Coskun and Can Sezer

ISTANBUL, Aug 2 (Reuters) – Turkey expects about one ship carrying grain to leave Ukrainian ports every day as long as an agreement is maintained to ensure safe passage, a senior Turkish official said on Tuesday, after the first ship left unattended. trouble from Odessa on Monday.

The first ship, the Razoni, carrying 26,527 tonnes of maize bound for Lebanon, was crossing the western Black Sea off Romania’s Danube Delta at 0714 GMT, almost halfway to Turkish waters, where it will be inspected on Wednesday. , according to Refinitiv Eikon data.

The sailing was made possible after Turkey and the United Nations negotiated a grain and fertilizer export deal between Russia and Ukraine last month, a rare diplomatic breakthrough in a conflict that has turned into a protracted war of attrition.

Exports from one of the world’s leading producers are intended to help alleviate the global food crisis.

“The plan is for one ship to leave … every day,” the senior Turkish official told Reuters, referring to Odessa and two other Ukrainian ports included in the deal. “If nothing goes wrong, exports will be made through one ship a day for a while.”

The official, who asked to remain anonymous, added that the departure of the Razoni was delayed a couple of days due to “technical problems” that have already been solved and that Turkey, a member of NATO, hoped that the safe passage corridor would work well.

The Razoni should reach Turkey’s shores in the early hours of Wednesday and be inspected that morning by Russian, Turkish, Ukrainian and UN representatives, Turkey’s Defense Ministry said.

The four parties are monitoring shipments and conducting inspections from a Joint Coordination Center in Istanbul, which straddles the Bosphorus Strait, which connects the Black Sea to world markets.

The Center plans to brief journalists on the shipments at 0800 GMT.