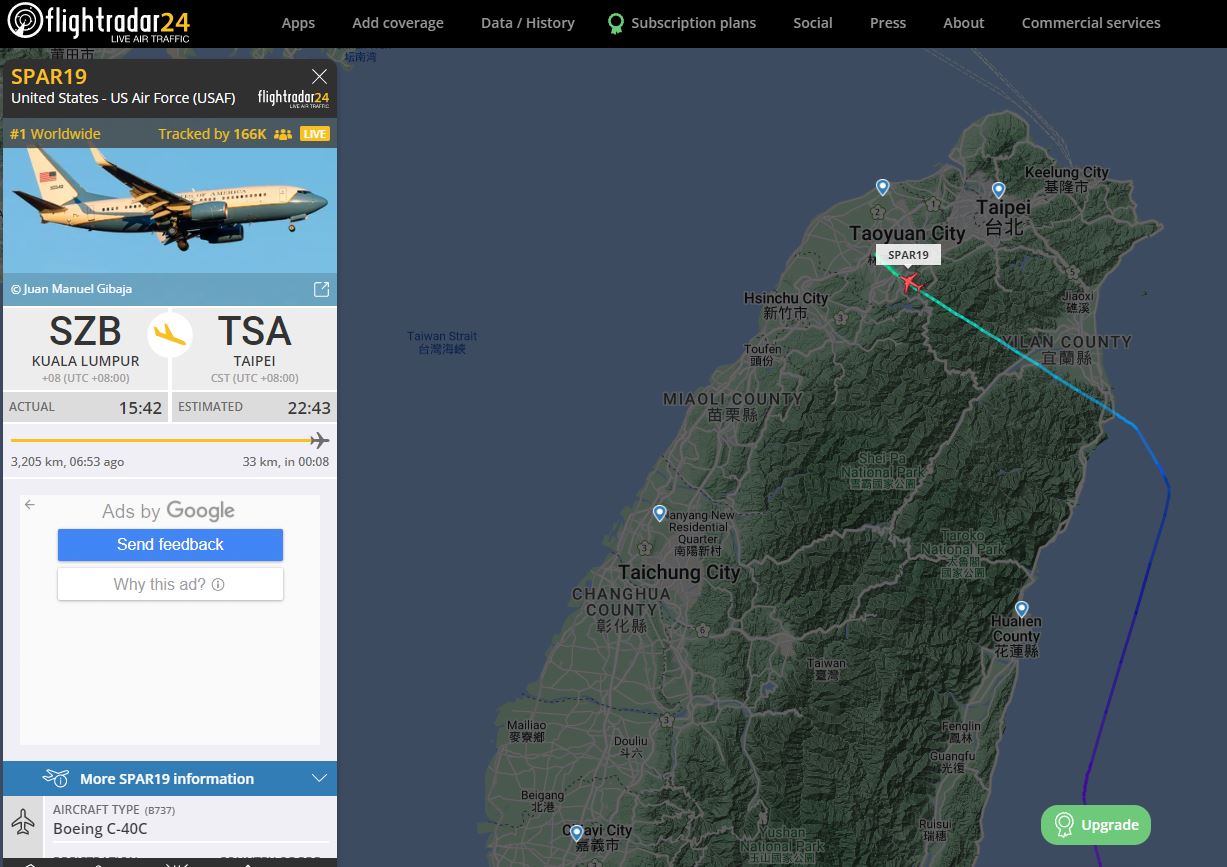 The President of the United States Congress, Nancy Pelosi, He is on board a plane that takes him to Taipei, although the destination was not officially announced. Meanwhile, tension is growing over warnings from Beijing, which opposes the visit.

According to the Flightrada24 site, the arrival will take place at approximately 22:45 local time (14:45 GMT). The growing certainty that he will arrive Tuesday night in Taiwan, the self-ruled island whose sovereignty is claimed by Beijing, has drawn attention to his trip.

Without being confirmed by Pelosi or the White House, the US Air Force plane (SPAR19) in which the president of the US Congress arrived in Malaysia on Tuesday around 10:30 local time (2:30 GMT ) Y took off from Kuala Lumpur at 3:42 p.m. (7:42 GMT), according to the Flightradar24 website, which initially did not specify a destination but now says it will be Taipei.

Citing anonymous sources, The Taiwanese newspapers The United Daily News, Liberty Times and China Times, among others, assured this Tuesday that the American will land at the Songshan airport.

Meanwhile, in the city there have already been welcome demonstrations, including the lighting of one of the emblematic buildings.

Welcome to Nancy Pelosi in Taipei

The luminaries follow the banners that have been seen this Tuesday in the preview of a trip that aroused great interest and tension between the great powers. 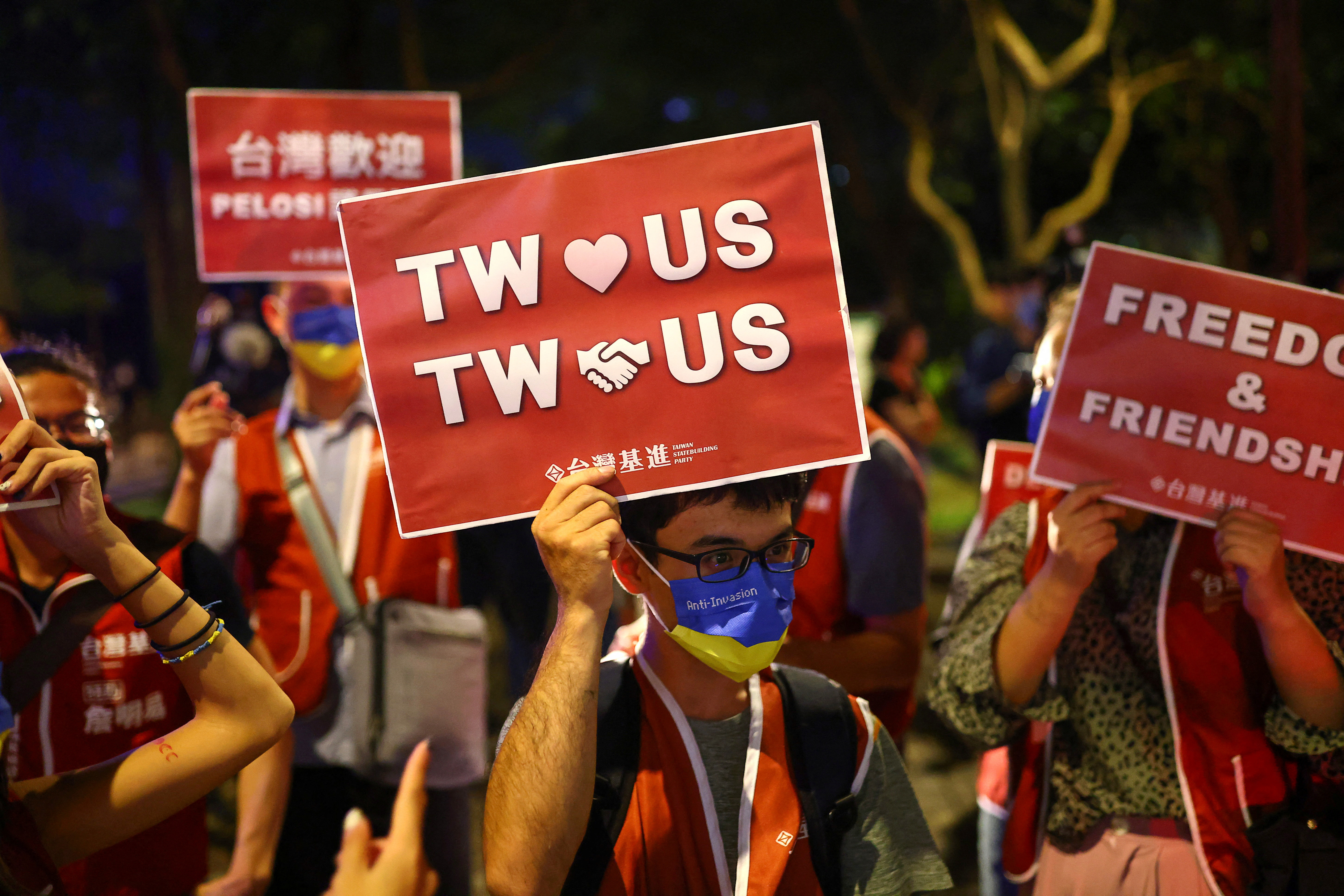 Pelosi visited Kuala Lumpur (Malaysia) after arriving from Singapore, the first destination of her Asian tour, on Tuesday morning, an express visit in which she visited the Malaysian Parliament and had lunch with Prime Minister Ismail Sabri Yaakob, according to the agency. Bernama.

“We have talked in depth about our common goals of ensuring a free and secure Indo-Pacific,” Pelosi stressed, according to a statement released by her office, in which she is the only veiled reference to China, to whom the US and its allies they accuse of wanting to dominate and change the rules in the Indo-Pacific. 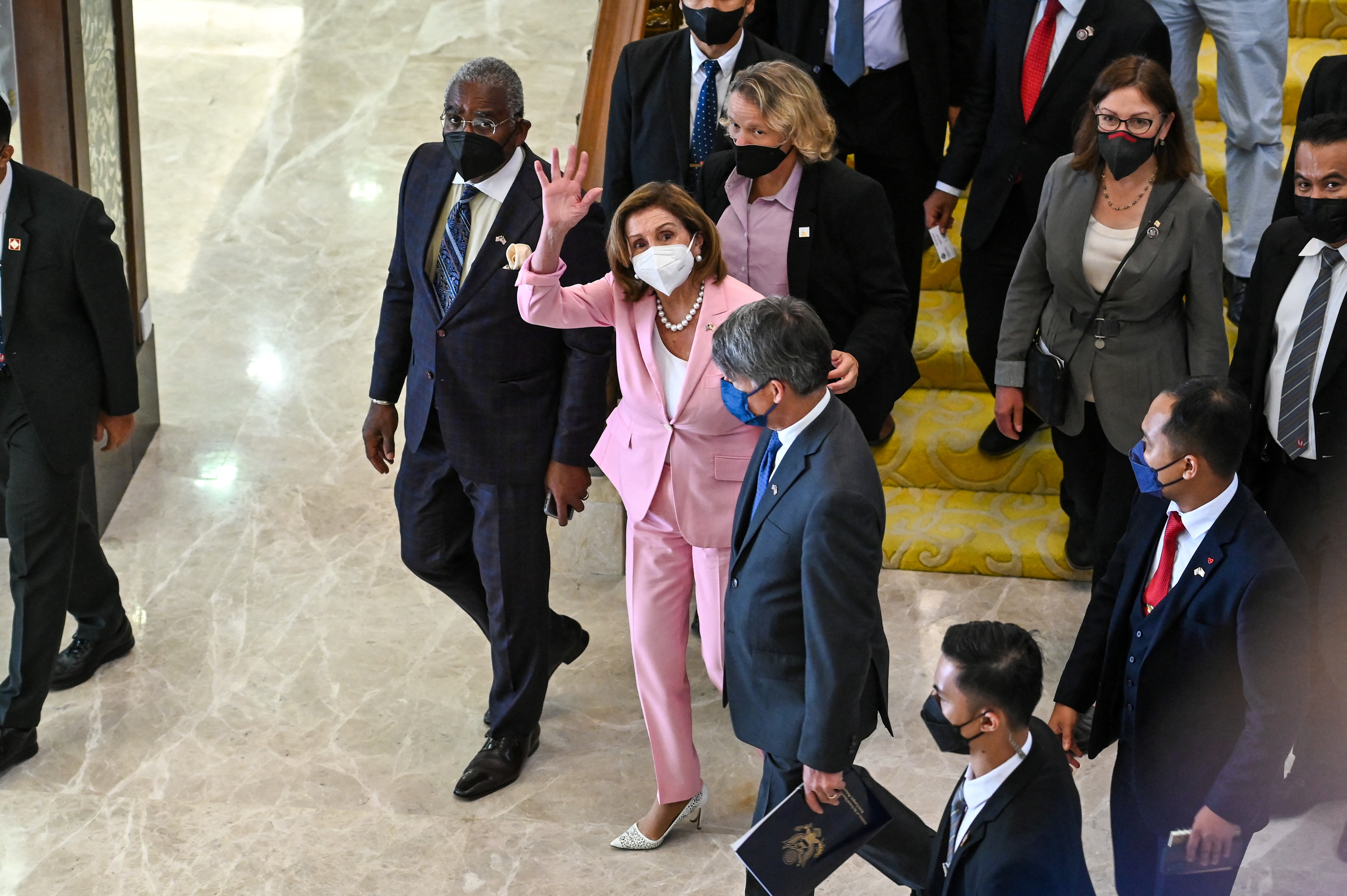 The text does not explicitly mention Taiwan, a topic that he admitted having discussed the day before with the Prime Minister of Singapore, Lee Hsien Loong, who reiterated the importance of “a stable relationship between China and the US for regional peace and security. ”, when the tension between the two grows over Pelosi’s plans.

South Korea and Japan, the next destinations for the president of the US Congress, have confirmed, for their part, that Pelosi will not arrive in these countries until next Thursday and Friday, respectively. 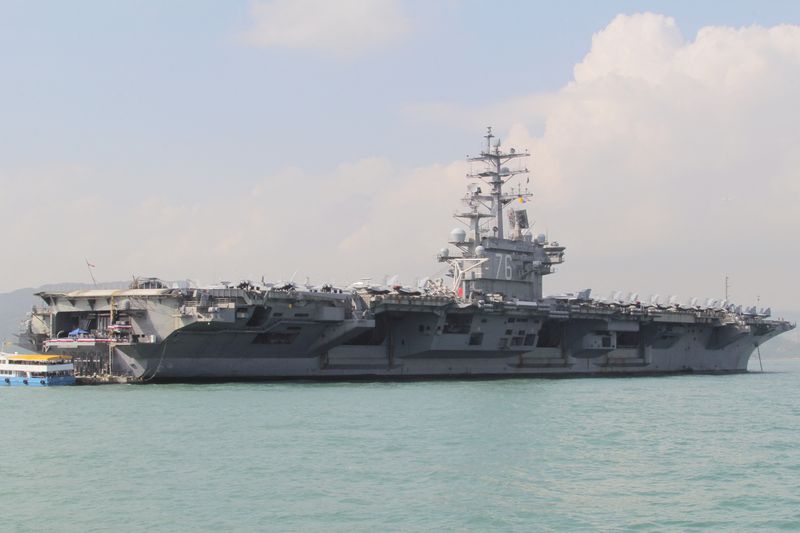 Tension between China and the United States

Some speculations that raised the tension between China and the United States, since Taiwan is one of the biggest stumbling blocks in their relations, since the US in principle would defend the island in the event of an attack by Beijing, although Washington maintains a ambiguous position on the matter.

Thus, the spokeswoman for the Chinese Foreign Ministry, Hua Chunying -who does not usually appear in public except on occasions of high importance, the last being on February 24, when the Russian invasion of Ukraine began-, warned on Tuesday that Taiwan faces “disastrous consequences” if the visit occurs.

“It is hard to imagine a more reckless and provocative action” than Pelosi’s visit, said Hua, who scorned US Secretary of State Antony Blinken’s statements about the “independent” status of the US House of Representatives. .UU, to disassociate the possible trip from the US Government.

“All US government agencies must implement the foreign policies that their government has committed to and recognizes,” Hua insisted, adding that “if the third most important person in the US government becomes Taiwan on a military plane,” his visit “will by no means be unofficial.”

If it occurs, it would be the first trip to Taiwan by a speaker of the US House of Representatives since 1997, And while Beijing’s response is still unknown, it is expected to make a show of force.

For its part, Washington limited itself to making it clear that if Pelosi decides to visit the island, she has every right, since it is an independent territory of the Xi Jinping regime. 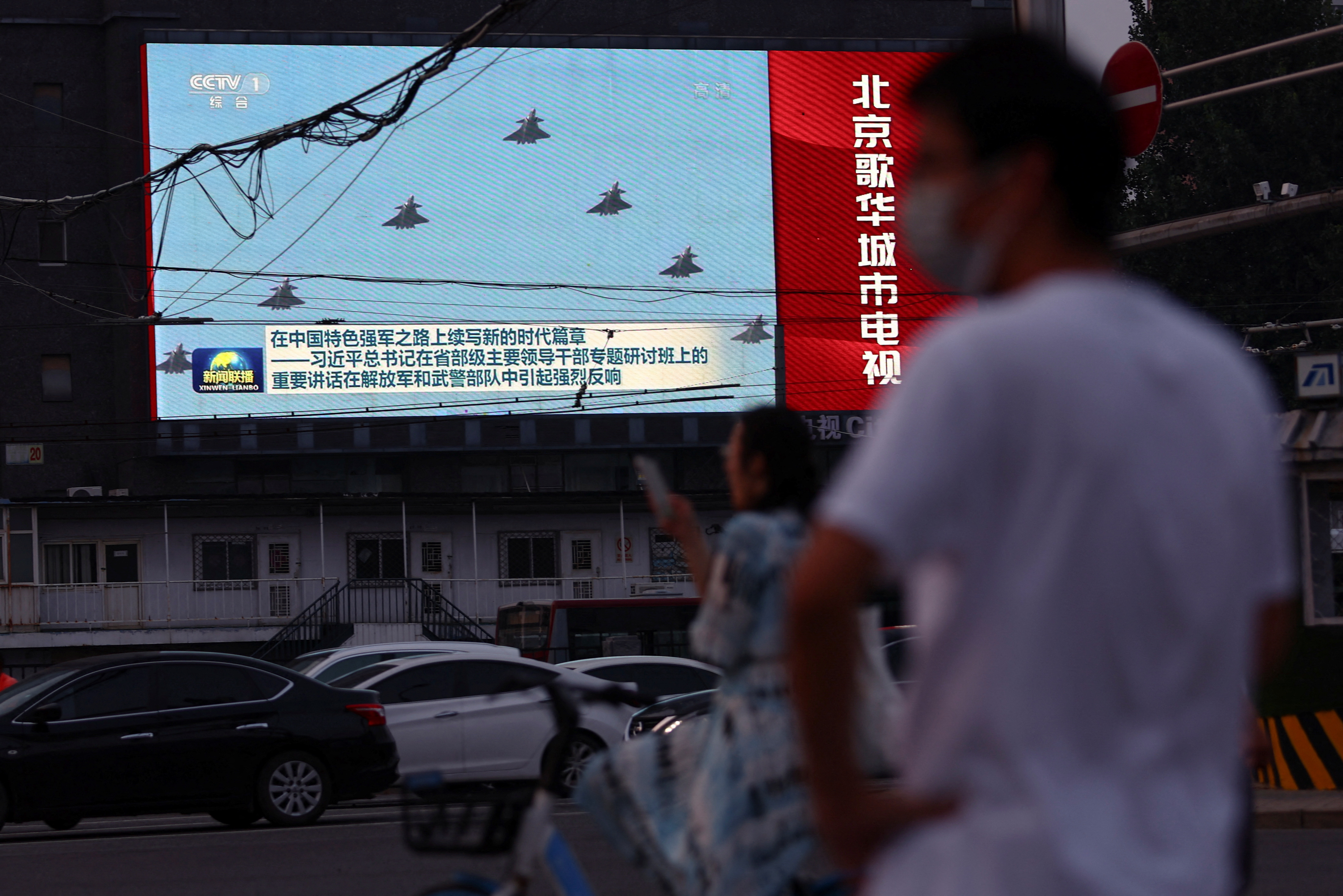 This Tuesday, a Chinese destroyer ship was sighted near Lanyu Island, controlled by Taipei and located 64 kilometers from Taiwan, while Chinese naval authorities announced the closure of maritime traffic in areas of the South China Sea due to military maneuvers.

China claims sovereignty over the island and has considered Taiwan a rebellious province since the Kuomintang nationalists withdrew there in 1949 after losing the civil war against the communists.

Although the United States does not maintain official relations with Taiwan, it is its main supplier of weapons and would be its greatest ally in the event of a war with China.

On the North American side, the USS Ronald Reagan aircraft carrier It is found in the Philippine Sea east of taiwanas confirmed on Tuesday to Reuters a Navy officer. The Japan-based ship is operating with a guided-missile cruiser, the USS Antietam, and a destroyer, the USS Higgins. “Although they are trained to respond to any eventuality, these are normal and routine deployments,” he explained.

Additionally, the amphibious assault ship USS Tripoli was also in the area as part of a deployment to the region that began in early May from its homeport of San Diego.

Tension grows over Nancy Pelosi’s possible visit to Taiwan: the US and China deployed ships and planes in the area