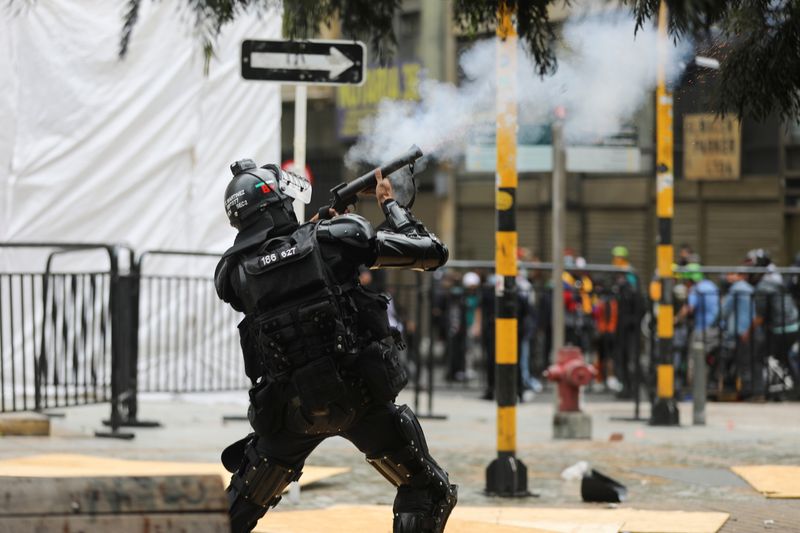 File photo. The Attorney General’s Office accuses two members of Esmad of excessive use of force against a minor. REUTERS/Luisa Gonzalez

This Monday, August 1, the Attorney General’s Office issued a statement of charges against two members of the Mobile Anti-riot Squad (Esmad) of the National Police. According to the entity, the agents are accused of the excessive use of force against a 17-year-old girl, during the national strike that took place in Colombia in 2021.

The events occurred during the demonstrations in Popayán, on May 12, 2021. According to the evidence collected, the adolescent was in a front garden of a residence in the Vesalles Pajonal neighborhood and he recorded the actions of Esmad with his cell phone. After that, she was required by members of the Special Operations Group (GOES), who held her by the arms and hit her for no reason.

The 17-year-old minor was transferred, at that time, to the Popayán URI facilities, where Quintero would have exceeded the use of force. The entity indicated that she was “Broaching, suffocating or putting force on the young woman’s neck, when she was being transferred by other police officers.”

For these reasons, the Public Ministry considered, provisionally, that the conduct of the members of the public force corresponds to a very serious offense committed by way of fraud.

The more time goes by, the actions of Esmad continue to give something to talk about in the country and even this is not even the first case in which one of its members is accused. On July 7, the Attorney General’s Office prosecuted an agent for causing the death of Christian Castillo, a young man who was shot by a grenade launcher on May 22, 2021.

The Prosecutor’s Office explained that the uniformed Gonzalo Moreno “apparently ignored the parameters set forth in the manuals that govern the specialty and disregarded the protocols for use defined for this type of device, since he operated it in a linear and direct manner at a distance of 27 meters , and hit the individual, 26 years old, in the head. According to the investigation and Legal Medicine, the accused shot in the left temporoparietal, causing a fatal injury.

Also read: ‘Official silence’: the report that Tremors ONG delivered to the Truth Commission on Esmad

On the other hand, Human Rights organizations in Colombia have publicly denounced that the cases in which excessive force by the Police has been denounced progress very slowly in ordinary justice. According to a report from the Defense Ministry, 1,106 civilians (among which eye traumas stand out) and 1,192 police officers have suffered serious and minor injuries, during the mobilizations of the national strike in May 2021.

To ensure that the situation does not repeat itself, the government of Gustavo Petro proposed a transformation of Esmad and the National Police. This was stated by the next defense minister, Ivan Velasquez, by confirming that the public force will no longer be part of its portfolio, but will be attached to the future Ministry of Peace, Coexistence and Security.

This modification, according to Velásquez, will not mean changes in the benefits that members of the Police have as part of the public force, but fundamentally with respect to the main reason for their actions. This to ensure the guarantee of citizen rights and freedoms.

Petro government splicing team recognizes the critical rights situation for the LGBT+ community in Colombia
Diego Guarnizo, the designer who will dress Gustavo Petro’s wife on the day of the presidential inauguration