The extreme heat already left almost 2,200 dead in Spain only in the month of July 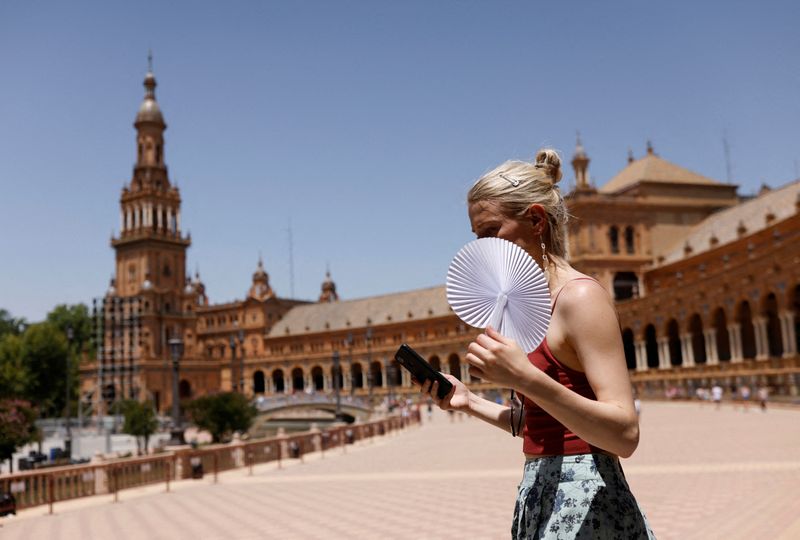 A woman with a fan in the Plaza de España in Seville during one of the heat waves that have shaken the country in 2022. REUTERS/Marcelo del Pozo

The suffocating heat that Spain suffered in July has caused the death of at least 2,176 people. Never before have high temperatures left such a harsh trail of deaths in a single month. The daily mortality monitoring system (known as MoMo) has determined that this is the number of deaths – up to day 30 – that can be attributed to the high and unusually high temperatures. The data for the 31st is yet to be known. Thus, it is foreseeable, according to the sources consulted, that the number of deaths caused by the heat exceeds 2,200.

Spain registered an excess mortality of 9,504 people in July, according to MoMo data. 23% of deaths are linked to the effects of high temperatures. Either directly -a heat stroke- or indirectly -diseases that have been aggravated by the effect of the increase in degrees in the thermometers-.

Since there are records -MoMo was launched in 2015- such a high number of deaths had never been reached in a month of July. In July 2021, the Carlos III Health Institute (on which the daily mortality monitoring system depends) registered 568 deaths from causes directly attributable to temperatures. In July 2020, the year of the pandemic, the number was similar: 581 deaths from heat. That is, four times less than those accounted for this month that has just ended.

As for the geographical areas, Madrid is the community that registered the most deaths from heat in July, with 470 deaths, followed by Andalusia (257) and Catalonia and Castilla-La Mancha (both with 177), always according to the data provided by MoMo .

Far from appeasing, weather forecasts speak of a third heat wave that will hit the country imminently. According to the forecasts of the Spanish Meteorological Agency (Aemet), it will begin on Thursday, August 4 and will have the hardest episodes on days 6 and 7. Those will also be the hottest days of 2022.

The historical average temperature in Spain in the months of August is 23.9 degrees. In the heat wave that arrives, the average will rise to 24.3 degrees.

Heat wave in Europe: what is it and why are they becoming more frequent and intense, according to scientists